Canada has no plans to double the amount of money it spends on its military, Prime Minister Justin Trudeau said Tuesday as he all but shrugged off Donald Trump’s persistent demand that America’s fellow NATO allies start spending two per cent of their GDP on defence.

That two per cent target, agreed to in 2014 at the NATO summit in Wales, is just one of many ways to gauge a country’s commitment to the military alliance, Trudeau said on the eve of the summit’s 2018 edition in Brussels, where he’ll once again come face to face with the U.S. president.

“I think the two per cent metric is an easy shorthand … it is a very specific and, to a certain extent, limited tool,” said Trudeau, who met Tuesday with Canadian soldiers taking part in a NATO mission in Latvia.

Canada does have a plan to increase its defence spending over the next 10 years, he stressed – a plan that his government’s own projections show will only reach 1.4 per cent of GDP by 2024.

But any increases in military spending will not come as a result of pressure to do so from “people talking about a two per cent goal,” he said when asked about Trump, but rather because of a desire to live up to the country’s commitments to its military allies around the world.

The prime minister’s comments came on the eve of what many expect will be one of the most contentious meetings between NATO leaders in the alliance’s 69-year history, with Trump having put allies on notice that they need to pony up on defence – or else.

A new report released by NATO ahead of the summit predicted Canada would spend 1.23 per cent of its GDP on defence this year – less, it turns out, than last year’s level of 1.36 per cent, leaving Canada ranked 18th out of the alliance’s 29 members.

The decline is largely the result of two one-time expenses last year: a retroactive pay increase for service members that was included in the Liberal government’s defence policy, and a $1.8-billion payment into the account that provides pensions for Forces members and their dependents.

“Many countries in NATO, which we are expected to defend, are not only short of their current commitment of 2 per cent (which is low), but are also delinquent for many years in payments that have not been made,” Trump tweeted before taking wing to Brussels.

“Will they reimburse the U.S.?”

Canada has been squarely in the American president’s sights of late, and the NATO spending issue has proven no exception. He wrote Trudeau ahead of the summit expressing “growing frustration” with the fact the two per cent target is still not being met by the majority of alliance nations.

And while Trudeau acknowledged the target as a legitimate way of measuring the commitment of alliance members, he said he considers tangible and consistent resources and leadership, which Canada continues to demonstrate, to be more important.

“I think it’s an important metric, amongst many others, to gauge how countries are doing in terms of contributors to NATO,” Trudeau said of the two-per-cent benchmark.

Asked directly whether Canada plans to meet the two per cent target, Trudeau said simply that there are no plans to double Canada’s defence budget, which currently stands at around $20-billion a year.

“Ultimately, the more important metrics are always, ‘Are countries stepping up consistently with the capacities that NATO needs? Are we leading in different opportunities? Are we contributing the kinds of resources and demonstrating the kind of commitment to the alliance that always needs to be there?“’ His message, of course, is that in Canada’s case, the answer is yes. The visit to Latvia was aimed at driving that message home, with confirmation that Canadian troops would continue to lead the NATO battle group through 2023. The government is also adding about 80 more soldiers, bringing the total to around 530.

Tuesday was spent paying homage to Latvia’s own military efforts – laying flowers at war memorials, inspecting military vehicles at the Adazi military camp outside Riga, and engaging in conversation with the youthful soldiers from numerous countries that make up the NATO battle group.

He was casual and familiar with the troops, joking around at a spaghetti dinner and admiring the armoured vehicles and equipment they had laid out to showcase for him.

“We’re at a time where the challenges on our global stage – to democracies, to the principles, to the values, to the rule of law that has kept Europe and much of the world at peace for the last 75 years – is now under a certain amount of strain and stress,” Trudeau told the military gathering.

“It becomes extremely important not just to stand and show that we are ready to fight for our values and demonstrate that strength of convictions … it is also really important that we do so not as individual nations, but as a collective.”

NATO Secretary General Jens Stoltenberg applauded Canada and European allies Tuesday for having reversed years of cuts by investing more in defence and contributing more troops and equipment to collective security – even as he pushed back against suggestions the alliance was in trouble.

“My message is that we are actually now stepping up,” Stoltenberg said.

“European allies are stepping up. Canada is stepping up. And we’re also doing more together, North America – the United States, Canada – and Europe. And I’m absolutely certain that this summit will show that we are able to deliver on security, on defence despite the disagreements we see on trade and other issues.”

At the same time, the NATO chief said more needs to be done, and that Canada and its European allies “should not increase defence spending to please the United States,” but because meeting the two per cent target is important for their own security and defence.

With reporting from Lee Berthiaume in Ottawa 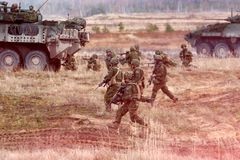