The Liberal government is expanding access to its proposed wage-subsidy program for employers, according to draft legislation obtained by The Globe and Mail, and is also putting the finishing touches on a plan to offer small businesses interest-free loans.

The draft bill on wage subsidies addresses business concerns that eligibility was overly restricted in the initial outline of the $71-billion effort to keep employers connected to their work forces during the COVID-19 health crisis.

Government officials are also working with bankers and lawyers to finalize details on an interest-free loan program for small businesses, guaranteed by $25-billion in government funds. Canada’s largest banks and credit unions are aiming to open the loan program to applications on Thursday, although the timing is still uncertain, according to three financial industry sources.

Federal officials are trying to shorten the time needed to verify applications for those loans to two days, according to the sources. As recently as Sunday, the government wanted a waiting period of up to five days before funds are released to approved small businesses, but banks pushed for a faster turnaround.

The waiting period is intended to give the government time to verify clients, prevent fraud and manage what is expected to be a large number of applications, even as surveys show some small businesses are wary of taking on more debt. Small businesses that had payrolls of $50,000 to $1-million in 2019 will be able to apply for loans of up to $40,000 and pay no interest until the end of 2022.

The Globe is not identifying the sources because they are not authorized to discuss the deliberations.

The employer wage-subsidy bill, the subject of discussions late Tuesday night between the government and opposition parties, is designed to get businesses to keep employees on their payroll even if revenue has declined because of the COVID-19 pandemic.

On the initial proposal that was unveiled last month, business groups were worried that eligibility would be limited to companies that could demonstrate a 30-per-cent reduction in revenue when comparing one month this year, such as March, April or May, to the same month in 2019.

The bill gives companies the option of using January and February as reference periods instead, under certain conditions. It also includes a section that reduces the threshold for March to 15 per cent. The proposed threshold would remain at 30 per cent for April and May.

Businesses had warned that many would not qualify for the program using March, 2020, revenue figures because the full brunt of the economic impact of COVID-19 did not hit until the latter half of the month.

In his daily news conference, Prime Minister Justin Trudeau said the government is speaking with opposition House leaders to set a date for the recall of Parliament to pass the wage-subsidy legislation.

“Much of the wage subsidy is going to be embedded with the Income Tax Act so that does require us to move forward on parliamentary legislation and that is what we are talking about right now with parliamentarians,” he said.

Dan Kelly, president and chief executive of the Canadian Federation of Independent Business, reviewed a copy of the bill at The Globe’s request and said he saw major improvement. “These are big fixes. It is absolutely critical that we get all parties aligned to move forward on this quickly.”

Goldy Hyder, president of the Business Council of Canada, lauded the government for going back to the drawing board and showing greater flexibility in the wage-subsidy program, particularly in qualifying for the 30-per-cent decline in revenue.

“There is a need for flexibility in special circumstances to ensure that companies that are unnecessarily excluded from the program now find a way to be included,” he said after reviewing the draft bill. “The goal here is to catch as many people as possible in the safety net because it is either pay now or pay later.”

Dennis Darby, president of Canadian Manufacturers and Exporters, said the government has made reasonable changes that add flexibility, but he raised concerns about how quickly the money can get to employers.

“The real issue is the speed at which they can get the money into the hands of the companies, especially small and medium-sized manufacturers,” he said. “You can’t run a manufacturing operation unless you have people.”

Mr. Darby said it’s important that MPs and senators get back to Parliament this week to immediately pass the legislation into law.

Not all business groups are happy though.

Ben Bergen, executive director of the Council of Canadian Innovators, said the government should have eliminated the revenue criteria entirely.

“We appreciate the effort but these provisions are not attuned to the innovation economy and leave so many Canadian technology firms in a lurch,” he said.

A spokesperson for Finance Minister Bill Morneau declined to comment on the draft bill because it has not been tabled in Parliament.

Another section of the bill appears to provide businesses with some accounting flexibility so that large irregular bookings of an expense or income do not affect eligibility for the subsidy.

The legislation states that companies must apply for the benefit before October, 2020.

The legislation confirms the government’s plan to cover 75 per cent of a wage, up to a maximum benefit of $847 a week.

The draft bill does not include some of the main demands put forward by opposition parties.

Conservative finance critic Pierre Poilievre said Tuesday that while he would not comment on the contents of the bill, his party is continuing to urge the government to allow companies to keep the federal sales tax revenue they have collected in recent months.

He adds that his party remains concerned that it will take too long for businesses to be able to access the wage subsidy.

NDP finance critic Peter Julian said his party is reviewing the bill and is encouraging the government to support his party’s policy proposals.

“We understand that we need to move quickly,” he said. “I think there will be intense, but short, negotiations.”

Bloc Québécois Leader Yves-François Blanchet released a statement Tuesday saying the draft bill responds to some of his party’s calls to add more flexibility to the wage subsidy. He also said the program should be expanded to include transfers to businesses that can be used for operational expenses as opposed to limiting the program to staffing costs. 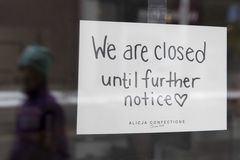 Coronavirus information
The Zero Canada Project provides resources to help you manage your health, your finances and your family life as Canada reopens.
Visit the hub
Follow Bill Curry, Robert Fife and James Bradshaw on Twitter @curryb @RobertFife @jembradshaw
Report an error Editorial code of conduct
Due to technical reasons, we have temporarily removed commenting from our articles. We hope to have this fixed soon. Thank you for your patience. If you are looking to give feedback on our new site, please send it along to feedback@globeandmail.com. If you want to write a letter to the editor, please forward to letters@globeandmail.com.
Comments