A former Liberal MP facing charges of fraud and breach of trust related to his time in office has had his case adjourned until early next year.

Lawyers for Raj Grewal and the Crown agreed to have the case return to court Jan. 6 during a brief virtual hearing on Tuesday.

Grewal’s lawyer Zachary Al-Khatib said during the hearing that his team received 10 gigabytes of disclosure materials from investigators.

He added that he has made a request for more evidence from the Crown.

The RCMP charged Grewal almost one month ago with four counts of breach of trust and one count of fraud over $5,000 stemming from his time in the House of Commons.

The Mounties allege Grewal tried to use his political position to land millions in personal loans, which he didn’t disclose to the federal ethics commissioner.

Investigators also allege that he used money from his taxpayer-funded constituency office budget for his own benefit.

Grewal has denied the allegations.

He left the Liberal caucus in 2018 for what he said were personal reasons, and did not seek re-election in last year’s federal election. 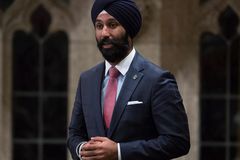