The leader of the federal Green Party says she no longer has to follow through on an order of her party’s federal council that directed her to repudiate a former advisor who criticized members of caucus.

Annamie Paul said in an interview Monday that the party’s federal council had decided not to pursue the order. However, she declined to provide any details.

The former advisor, Noah Zatzman, became a focus of controversy within the party after New Brunswick MP Jenica Atwin – one of three members of the Green caucus and the only member from outside British Columbia – left to join the Liberals on June 10.

The trigger for her defection was a May dispute over the leader’s position on Israel. After Ms. Atwin accused Ms. Paul to being soft on Israel, Mr. Zatzman took to Facebook to accuse unnamed Green MPs of antisemitism and vowed to defeat them. Ms. Atwin told CTV she left in large part because of the fallout from that disagreement – Ms. Paul disputes this explanation. The day Ms. Atwin left the party, the two remaining MPs blamed her exit on the attack from Mr. Zatzman.

Eventually, the federal council, the party’s governing body, gave Ms. Paul an ultimatum: repudiate comments from Mr. Zatzman and reaffirm her support for her MPs at a news conference or face a confidence vote on July 20.

But Ms. Paul said on Monday that she no longer has to take any action in response to the federal council’s order. “There’s no pro-active action that is required of me in the same way there was [before],” she said.

Asked Monday for comment, Green Party press secretary Rosie Emery said in a statement that the party had no further information to provide.

Neither Elizabeth May nor Paul Manly – the party’s two current MPs – have endorsed Ms. Paul’s leadership, which she won eight months ago.

On Monday, Ms. Paul said she was looking beyond past disputes. She was touring Guelph with Mike Schreiner, leader of the Green Party of Ontario and the city’s member of provincial parliament.

She said she is now focused on moving on, and on trying to make the case for the Greens.

“All I want to do is what I am doing, which is what I ran to do, which is share our vision with voters and persuade them it is something they should be excited about and support by voting for more Greens,” she said.

During an earlier news conference on Monday, Ms. Paul said all political parties face their challenges.

“If the standard was that every political party had to have their house completely in order before doing anything then we would have a permanent paralysis in Canadian politics. That is a very high bar,” she said.

“We need Annamie’s strong, fearless voice in Ottawa,” he told a news conference. “I’ll be working to get Annamie elected.”

Editor’s note: An earlier version of this story referred to Noah Zatzman as Green Party Leader Annamie Paul's aide. He is a former advisor.

In addition, this article previously stated Green Party caucus members blamed Jenica Atwin’s floor-crossing to the Liberals on Mr. Zatzman, who responded with a Facebook message. In fact, the Facebook message was published before their remarks.This version has been corrected 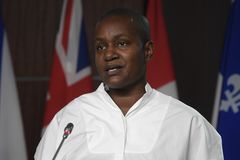 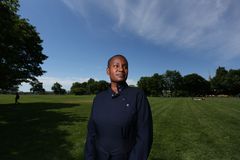 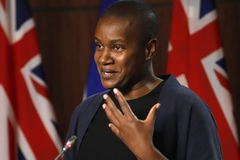