Jean Charest is thinking of running for the leadership of the Conservative Party. He would make an ... interesting choice.

Mr. Charest is a consummate politician who would broaden and deepen the base of the party. Justin Trudeau’s Liberals would be very unhappy to see him across the aisle.

But though Mr. Charest might well win a federal election, first he would have to win the party’s leadership. And that would be no easy thing.

As leader, Mr. Charest took the Progressive Conservative Party from the brink of extinction – winning only two seats in the 1993 election – to barely needing life support – 20 seats and 19 per cent of the vote in the 1997 election. In the next decade, he won three consecutive Quebec elections as premier, an almost impossible feat in that turbulent province.

His instincts are broadly conservative, favouring tax cuts and smaller government. If he often failed to act on those instincts – well, Mr. Charest understands that the art of politics lies in respecting the political terrain, rather than trying to bulldoze it.

On social issues, we could expect support for women’s rights and the rights of sexual minorities. A Charest government would respect provincial autonomy as well. Although they are very different people, a Conservative government under Jean Charest would look not that different from Stephen Harper’s Conservative government: a strong emphasis on lower taxes, a move toward a balanced budget and an incremental, pragmatic approach to smaller government.

And Mr. Charest could achieve what Mr. Harper could not: strong Conservative gains in Quebec. In Ontario, he would be one of the most attractive candidates the Conservatives could pick, if the question was – as it should be – who can best break through among suburban immigrant voters.

But how would Mr. Charest fare in Western Canada? Not well, which is one reason why the odds of him winning the leadership are so long.

The Reform Party, which begat the Canadian Alliance, which largely begat the Conservative Party, arose as a protest against the Progressive Conservatives when they were led by Brian Mulroney. Mr. Charest was a protégé of Mr. Mulroney. As premier, he supported the long-gun registry that Westerners hated and the Harper government abolished. Quebec set up its own version of the registry after the national program ended.

Western Reformers created their party because they were sick of being ignored or belittled by Central Canadian elites. Mr. Charest is the literal embodiment of those elites.

Within the party, Ontario is also an issue. Mr. Charest first courted, then abandoned, the Common Sense Revolution ideology that propelled Mike Harris to power. There is no love for him within that wing of the party.

There is also the question of how he would put together a political campaign, having been off the national stage for more than 20 years.

Mr. Charest has also been dogged by ethical issues from his time as premier. He has never been charged with or even credibly accused of improper conduct, in the wake of investigations into the Quebec Liberal Party and the province’s construction industry.

Nonetheless, eyebrows have been raised. Conservatives love to portray Liberals as a party of greased palms and insider influence. Mr. Charest is not the ideal vehicle for such a message.

So the former premier has baggage. If he won the leadership, there is a risk – although probably only a small one – that the party could rupture into its Red Tory and Reform wings, with the Liberals guaranteed another decade in power.

All that said, there are first-tier candidates and second-tier candidates in any leadership race, and in this Conservative race Mr. Charest would belong emphatically in the first tier, along with former cabinet minister Peter MacKay and former interim leader Rona Ambrose. As a political performer, he would run circles around his opponents.

Other potential candidates, including MPs Erin O’Toole, Pierre Poilievre and Gérard Deltell, are second-tier. During the next election campaign, they would have to introduce themselves to Canadian voters, which is always a disadvantage.

Political parties have two purposes. One is to get a certain idea across. The other is to win and hold power. Liberals mostly care about the second purpose; Tories tend to fixate on the first. But if the Conservatives are a serious party, they should want to win. And if they want to win, say hello to Jean Charest. 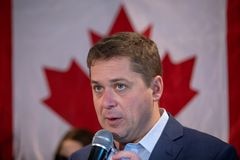 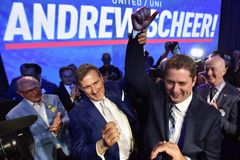