Manitobans could see more relaxed shopping hours if the Progressive Conservatives are re-elected in the provincial election next month.

PC Leader Brian Pallister said Friday that he would repeal legislation that restricts Sunday and holiday hours for certain retail and grocery stores, but a union says that would result in workers losing rights.

Pallister stood inside the Dakota Family Foods in Winnipeg and declared that Manitobans deserve the flexibility to buy groceries when they want.

“We inherited from the previous government Sunday and statutory holiday shopping laws that are outdated, they are unnecessarily complicated, and I would say do not align with the expectations of the modern Manitoba we live in,” Pallister said.

Retail workers would not be able to refuse to work on Sunday if the legislation were repealed, said Jeff Traeger, president of the United Food and Commercial Workers Local 832.

“This is an important right that allows retail workers to maintain some quality of life and time with their families on weekends,” Traeger said in a statement.

A letter obtained by The Canadian Press to members of a labour management review committee on Aug. 8 calls for input on a proposal to repeal the legislation. Growth, Enterprise and Trade Minister Blaine Pedersen requested recommendations by Sept. 27 – 17 days after the election.

Traeger, who is involved with the committee, said the Tory promise shows the PCs would move ahead without input about how to increase hours while still preserving rights.

“It’s sad to see that Pallister is moving ahead without hearing how this will negatively affect workers in the industry.”

Manitobans go to the polls Sept. 10.

Legislation was loosened under the previous NDP government in 2012 to allow affected retailers to open at 9 a.m. on Sundays and statutory holidays. That was three hours earlier than before, but stores still had to be closed by 6 p.m.

The complicated legislation has left many businesses confused about when they can open. It’s been criticized because marijuana dispensaries, casinos and large pharmacies with substantial grocery sections can stay open.

Earlier this year, the owner of an independent chain of Winnipeg grocery stores was fined $10,000 for opening on a holiday.

Pallister said Manitoba is the last western province to have such retail restrictions. He said he wants to give municipalities the authority to set hours in their regions.

Any change to the law would not affect a requirement to keep stores closed during specific hours on Remembrance Day, he added.

A survey by the Canadian Federation of Independent Business last fall found 62 per cent of small-business owners supported being able to open on holidays. The support was stronger – 68 per cent – in Winnipeg.

Liberal Leader Dougald Lamont said the legislation should not be repealed without a review and proper consultation.

“It’s sort of throwing out the baby with the bath water,” he said.

NDP Leader Wab Kinew agreed the law should change but said, if his party were elected in September, he would work with businesses and employees to ensure that workers’ rights were respected.

“Under Mr. Pallister we’ve seen his record when it comes to disregarding the rights of working people in Manitoba. My concern is that somebody who works at Safeway and Sobeys is going to end up with less days off,” he said.

The Liberals said they would create 1,200 additional housing units for seniors by 2024 at a cost of $160 million, put $5 million more each year into programs for seniors and create an independent seniors advocate. 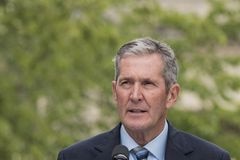 Manitoba Liberal candidate says he was attacked while canvassing voters in apartment building
August 20, 2019
Report an error
Due to technical reasons, we have temporarily removed commenting from our articles. We hope to have this fixed soon. Thank you for your patience. If you are looking to give feedback on our new site, please send it along to feedback@globeandmail.com. If you want to write a letter to the editor, please forward to letters@globeandmail.com.
Comments