Médecins Sans Frontières staff aboard a ship detained in an Italian port say authorities are wrongfully using a legal tool to prevent them from rescuing migrants and refugees at sea.

Barbara Deck, a Canadian nurse and the medical project co-ordinator for MSF on Sea-Watch 4, said the ship’s crew had rescued 354 people in the central Mediterranean off the Libyan coast and was looking for a safe port to allow the survivors to disembark.

Sea-Watch 4 was told by Italian authorities that the ship and its crew had to remain at anchor off the port of Palermo, in northern Sicily, for a two-week quarantine. The rescued passengers were moved to a ferry for the quarantine period.

Days after the quarantine was complete, Sea-Watch 4 asked to go to port for a crew change. The ship was undergoing a sanitization process, said Ms. Deck, when Italian authorities imposed port state control, which involved a lengthy inspection and the eventual detention of the ship.

According to the Associated Press, authorities said the main reasons for the ship’s detention were that saving people at sea did not conform with the vessel’s registration, there were too many life jackets on board and the ship’s sewage system was not adequate for the number of people it rescued.

This is the fifth rescue ship prevented by Italian authorities in recent months from continuing its work. The Sea-Watch 4 is operated by four groups, including German-based Sea-Watch and Médecins Sans Frontières.

Ms. Deck said the port state control mechanism is meant to ensure ships are seaworthy and safe for their crews, but authorities are exploiting it.

“Ironically, they’re going so far as to say that it’s unsafe for the people that we rescue, but I mean, it prohibits us from even going to prevent these people from drowning at sea,” she said.

“People are still leaving. August was the deadliest month for crossing the Mediterranean in all of 2020,” she said. According to MSF, last month 111 people died or were reported missing after trying to make the dangerous crossing. The real number is almost certainly higher.

MSF said in a statement that not only are European states failing to conduct search-and-rescue efforts, they have co-opted the Libyan coast guard to police the region. The organization said that since the beginning of this year, almost 8,000 refugees and migrants have been intercepted at sea and forced back to Libya – 32-per-cent more than this time last year.

“We’ve heard of thousands of people being intercepted and sent back to Libya, where they face arbitrary detention and all sorts of things. We hear of people drowning,” said Ms. Deck, adding that people are crossing the sea in lightweight rubber boats.

She said the people Sea-Watch 4 rescued came from Libya, but many of them by way of other countries. A third were children – the youngest just 10 months old. They rescued people with disabilities and women travelling alone, some of them pregnant. Young boys Ms. Deck treated in the clinic on the ship told her they knew they risked drowning but were willing to make the crossing rather than stay in Libya and be forced into arbitrary detention.

She said MSF treated more than 30 people with burns caused by boat fuel mixed with seawater, which creates a corrosive substance.

“People are not making this choice," Ms. Deck said. "It’s something they’re doing because they feel they have no choice left.”

Hannah Wallace Bowman, MSF’s communications manager on the ship, said there is no independent analysis or reporting of what goes on at sea, so MSF does not know at any given time how many people are lost and need help.

“This has now just become kind of an accepted reality in the central Mediterranean: that people will just go missing, and then there’s no follow-up or no questions asked,” she said.

Greece says there are 243 positive COVID-19 cases among migrants admitted to new camp in Lesbos
September 21, 2020 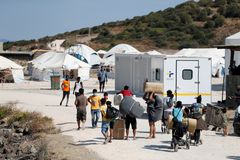 Thousands march in Berlin in support of refugees in Greece
Subscriber content
September 20, 2020 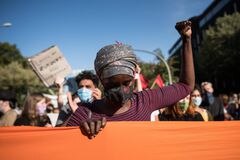 One thousand refugees welcomed to Canada during COVID-19 pandemic
September 23, 2020 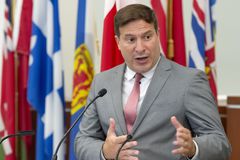