Canada’s chief statistician says he is open to delaying the January launch of a plan to obtain the banking records of 500,000 Canadians in light of concerns from the public, but Anil Arora insists the move is ultimately required to ensure Canada is governed by facts rather than anecdotes and “fake news."

In an interview with The Globe and Mail Friday, Mr. Arora said January is a tentative target for launching the controversial pilot project, but added that the agency is willing to be flexible on the timing.

Mr. Arora said the agency’s January launch will proceed if there is a bank that is ready to participate, but more time may be required.

“If it takes a little bit longer to assure Canadians that we will always − and always have and always will − protect the privacy of their information, obviously we will adhere to a timeline that works,” he said.

Statscan’s plan to use its sweeping legal powers to obtain the banking records of individual Canadians blindsided the banks and is generating a national political debate over the future direction of the agency. Statscan wants the records in order to produce reports on household spending and believes the data will be more timely and accurate than the current method of asking survey participants to record their purchases in a diary.

Mr. Arora said that those survey participants may forget to record their digital purchases such as Netflix subscriptions, and moving toward relying on private-sector databases is a common trend among the world’s statistics agencies.

“As we see the pace at which Canadians now operate in the digital world, we don’t want to be sitting there worrying and working with paper diaries and pencils,” he said. “What we do is to make sure that Canadians are served with good-quality data so that they’re not having to rely on anecdotes, fake news [and] alternative facts.”

Dozens of top officials from Canada’s big banks gathered Friday on Bay Street in Toronto to plan a strategy in response to the wave of consumer complaints that they’re receiving over Statistics Canada’s plan to obtain detailed records on the spending habits of Canadians.

After the meeting, the Canadian Bankers Association added updated language to their earlier carefully worded statement on the issue.

“The CBA and its members are encouraged that the Office of the Privacy Commissioner has launched an investigation into Statistics Canada’s data request," the statement said. “The banking sector continues to emphasize the central importance of protecting the privacy and security of customer financial data and personal information.”

Bank officials will have an opportunity to expand on those comments next week on Parliament Hill. The Senate banking committee is inviting the CBA, Mr. Arora, Innovation Minister Navdeep Bains, Privacy Commissioner Daniel Therrien and potentially others to appear as part of a special hearing Thursday.

Mr. Arora told The Globe Friday that Statscan has been in talks with the CBA for a year about its plans, but the controversy emerged in recent days as the agency expanded those discussions to individual banks. Mr. Arora said Statscan will work to address any concerns banks or citizens may have about the project.

The issue continues to play out politically as the NDP joined Conservative MPs Friday in urging the Liberal government to cancel the agency’s plans. Prime Minister Justin Trudeau defended Statscan’s project this week.

“Canadians are appalled to learn that Statistics Canada plans to access their detailed personal information. They were never consulted and did not consent,” said NDP MP Brian Masse during Question Period.

The NDP called for the project to be suspended until it is “investigated, there are consultations and consent is obtained.”

Meanwhile Conservative Leader Andrew Scheer posted a video on his social-media feeds Thursday evening to call for the program’s end.

“This is your private financial information. It belongs to you, not the government, and they should not be going to your bank and your credit company to try and take it. This is wrong,” he said in the video. “Justin Trudeau needs to shut this down now.” 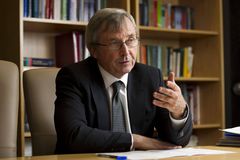