One of Justin Trudeau’s largest domestic political problems followed him to London on Wednesday, as environmental activists greeted the prime minister with calls to kill the controversial Trans Mountain pipeline expansion.

The demands came during an elaborate protest outside the Canadian High Commission in the capital’s London’s iconic Trafalgar Square and marked the first time the pipeline has reared its head during what has otherwise been a relatively smooth foreign trip.

The protest coincided with a new greenhouse gas report to the UN that showed Canada’s emissions are starting to trend downward, but not nearly at the rate needed to meet the country’s international commitments.

Read more: Running on empty: Foreign shipments of fuel to B.C. would ease pain of Alberta cuts to energy exports

The prime minister, however, appeared unmoved as he left the high commission. He first thanked the activists for coming and later reasserted the importance of selling Canadian oil now to pay for cleaner energy over the long term.

“We’re going to stay in doing both together, because we know that growing the economy is the only way to pay for the transition towards the clean future that we all need.”

The protest came on Trudeau’s first full day in London following a visit to Paris, where the pipeline did not come up.

The prime minister started the day at a women’s rights event at London City Hall before sitting down with British Prime Minister Theresa May, Rwandan President Paul Kagame and leaders from various island countries.

The prime minister also had an audience with the Queen before huddling with his British, Australian and New Zealand counterparts at Britain’s National Cyber Security Centre for an afternoon briefing on cyberattacks, notably those allegedly perpetrated by Russia.

The protest at the Canadian High Commission was organized by Greenpeace UK and included a cardboard Trudeau cut-out wearing a hard hat and a fake pipeline bearing the words “Crudeau Oil.”

Rappellers also scaled two of the building’s Greek-style pillars and unfurled large banners with the same words as British police and high commission staff looked on passively from the sidewalk below.

The 30 activists had simply hoped to make their message with Trudeau in town, but they actually saw him – albeit for only a few quick seconds – when he departed the high commission for the city hall event.

He strode briskly to a waiting car as the protesters yelled “Climate leaders don’t build pipelines” and “Leave the tarsands in the ground,” but he did thank them for coming out.

Pat Venditti, campaigns director at Greenpeace UK, who hails from Ontario, said the activists wanted to show their objections to the Trudeau government’s plan to expand the Trans Mountain pipeline.

“Many, many people oppose this, including First Nations, the province of British Columbia, the residents of Vancouver and Burnaby,” said Venditti.

“And we’re here to support them and to say if Mr. Trudeau wants to be a climate leader, he has to leave pipelines out of it.”

Climate change came up several times during the course of the day, including during a special one-on-one meeting with May in the famous Rose Garden at the British prime minister’s residence.

“Day one after Brexit we will have the (Canada-EU free trade) deal in place between Canada and the U.K.,” he said.

“And after that point, we will begin discussions on how to further refine and make it appropriate and possibly enhance it for the Canada-U.K. relationship specifically. That’s something that we’re very much focusing on and looking forward to.”

Trudeau is scheduled to attend a meeting of Commonwealth leaders on Thursday before returning to Canada on Friday. 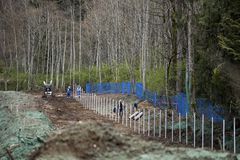 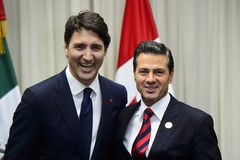