The federal lobbying commissioner is reviewing a report that Rob Silver, the spouse of Prime Minister Justin Trudeau’s chief of staff, Katie Telford, contacted senior Liberal staff on behalf of his employer’s efforts to seek changes to the federal wage subsidy program.

In an e-mail to The Globe and Mail on Friday, spokesperson Manon Dion said the commissioner’s office, an independent body, is looking at the matter.

“The office can confirm that we have opened a preliminary assessment. Given the possibility that these matters may become police investigations, the office is unable to confirm or deny whether an investigation has been initiated or is ongoing,” she said.

Vice News reported on Friday that after the Canada Emergency Wage Subsidy was announced in April, Mr. Silver contacted Liberal aides in the Prime Minister’s Office and in the office of then-finance minister Bill Morneau, seeking legislative changes to it. Mr. Silver joined independent mortgage finance company MCAP in January. He is senior vice-president of strategy, policy and risk, according to his LinkedIn profile.

The report said Mr. Silver also contacted Mike McNair, who is described on his LinkedIn profile as a senior policy adviser in the PMO. The PMO told The Globe on Friday that Mr. McNair was a volunteer policy adviser earlier this year and has been in a paid position since June 15. Before his period of volunteering, Mr. McNair was a senior staff member in the PMO for several years.

A source confirmed to The Globe that Mr. Silver contacted Liberal officials about the pandemic relief wage subsidy. The rules were not changed for MCAP.

The Prime Minister’s Office told The Globe earlier this month that Ms. Telford voluntarily established an ethics screen after Mr. Silver joined MCAP to ensure she is not part of any discussions about the company, even though the Office of the Conflict of Interest and Ethics Commissioner told her it was not necessary. The PMO repeated that on Friday in response to the new details, saying the screen has been “diligently followed.”

“Ms. Telford has not been involved in any discussions related to MCAP. The Prime Minister’s Office takes all its obligations regarding ethics very seriously and follows the rules,” the office said.

Pierre-Olivier Herbert, who was director of communications to Mr. Morneau, provided a statement on Friday that did not directly respond to questions about whether Mr. Silver contacted the minister’s office.

“Our office interacts regularly with a broad range of stakeholders to answer questions on government programs, including the wage subsidy. These discussions are always done in full respect of the rules in place,” he said in an e-mail. “Any report of any interaction that could be described as pressure is completely false.”

Mr. Morneau on Monday announced his resignation from politics to campaign for the leadership of the Organization of Economic Co-operation and Development.

A spokesperson for MCAP said the company follows the lobbying commissioner’s guidelines.

“MCAP, through counsel, consulted with Canada’s Lobbying Commissioner in January to establish proper screens and protocols around any engagement with government. MCAP and its employees and officers have strictly complied with the letter and spirit of this guidance and all applicable laws,” the company stated.

Mr. Silver was registered to lobby the federal government before the Liberals came to power in 2015. At the time, he worked for the lobbying firm Crestview Strategy Inc., representing corporate clients, including Coca-Cola, Target Canada and the Canadian Gaming Association.

After the Liberals formed the government in 2015 and Ms. Telford was named chief of staff, Mr. Silver announced he would no longer be an employee or shareholder of Crestview Strategy. He said he was leaving to ensure Ms. Telford’s success.

“I decided that me remaining an employee or shareholder in a government relations firm that does federal work while my spouse is in her current job is inconsistent with this objective,” he said in a statement at the time. He is not currently registered as a lobbyist.

Mr. Silver’s contacts with political staff about the wage subsidy are separate from a Globe report earlier this month that the Canada Mortgage and Housing Corp. (CMHC), an independent Crown corporation, awarded MCAP a $56-million contract to administer the federal government’s Canada Emergency Commercial Rent Assistance program. The contract was signed on May 15. The program was extended in July, meaning the total value could reach $84-million.

The Globe reported that Mr. Silver took part in a June 22 meeting with CMHC regarding the public reporting of the program’s application numbers. The Prime Minister announced the rent assistance program in April.

NDP ethics critic Charlie Angus said in an interview the new report is disturbing and should be investigated.

Conservative MP Dan Albas said in an e-mail that Parliament, which is prorogued, deserves answers on what happened.

“What we have seen during Trudeau’s summer of scandal is that Liberal insiders have repeatedly used the pandemic for their own gain,” he said.

Flaws in Ottawa’s wage-subsidy program kept much of the funding from flowing to small business
Subscriber content
August 16, 2020

Opinion
The wage subsidy: A windfall for Canadian corporations
August 9, 2020 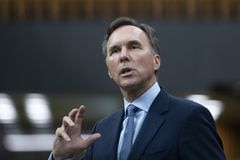