For a peek into how Canada will build more affordable multifamily housing in the future, look no further than a new, above-ground, five-storey parkade in downtown Calgary.

The $80-million structure, commissioned by the city-owned Calgary Municipal Land Corp., is a 500-parking-stall behemoth plunked within the quickly gentrifying East Village. But the structure also hides a secret: It’s designed to transform into housing.

“We don’t know what we’re going to need in five, 10 or 20 years,” says Kate Thompson, with the Land Corp., which owns the building. “The parkade is designed for future flexibility. We’re trying to make sure we’re not making any decisions that preclude future uses.”

That flexibility means the parking structure, designed by Winnipeg-based 5468796 Architecture with Kasian, could someday be converted almost entirely into housing, all of it located in what’s becoming a trendy part of Calgary. The plans also call for commercial space at street level and a large collaborative innovation centre called Platform inside.

Calgary’s approach, experts say, is but an extreme example of a larger trend that’s changing multifamily residential development in many cities in Canada. They say developers increasingly view parking as a risky, costly, unattractive proposition and want to build it in ways that satisfy current demand, which is shrinking, but also maximize its future uses.

Standing in the way in many cases, they say, are municipal governments.

Indeed, when Tyler Dixon and his team at the Edmonton-based office of Canada’s Dialog design firm were brought in to help design the parking for the 32-storey Ultima condominium in downtown Edmonton, the problem they solved wasn’t maximizing the number of cars the structure could hold but instead, building something that can be used for something other than parking in future. He says this approach is becoming almost universal in the industry. “We are hearing requests to investigate options that reduce [clients’] investment in parking while still meeting the current demands of the market. A few years ago, every two-bedroom unit was requested to have two parking spaces associated with it, but we’re now seeing this being pushed down to 0.5 to 0.8 parking spaces per unit as the norm.”

The reason is the shift in how people move through cities and where they live relative to where they work. The patterns of past generations – you own a car, live in a house far away from the office and commute – are out of step with a future where living centrally and using shared mobility is more common.

But the sticking point, Mr. Dixon says, is getting municipal governments to think inside the box again on parkades, or at least embrace parkades that are above ground. For example, the Ultima parkade was forced underground in many ways because of policies and attitudes that penalize above-ground parking – even though a parkade at grade is far more reusable for housing in the future. “In an effort to promote active street fronts and prioritize pedestrian activity, many of the downtown zones have implemented regulations that do not allow for parking to be provided along the building’s perimeter above grade,” Mr. Dixon says. “On smaller sites, this can make for very inefficient parking layouts that are not economically feasible.” Further, he says, the floor-area ratio (FAR) – the maximum amount of space a building can contain within a given zone and a measure critics of density often hone in on – often includes parking areas above grade but not below. “Underground parking does not count against your FAR, and it does not have to be limited to the same setbacks from the property lines."

Building parking underground may be more aesthetically pleasing today but is limiting for future. And that’s a dilemma developers are making clear. “For most projects, we are asked to look at … an above-ground parking structure rather than underground, recognizing that there are limited options in doing something different basement spaces in particular,” Mr. Dixon says.

James McKellar, a professor at the Brookfield Centre in Real Estate and Infrastructure at York University, says building a parkade to be re-usable as housing in future requires forethought. Floor slabs need to be flat and have floor-to-ceiling gaps suitable for a living room rather than a Honda CR-V; any ramps built have to be designed to be removable or to not interfere with future uses; the structure must also be built with it being able to accept a building envelope.

The push toward thinking of parking as flex space is simple economics. “Some [condo] developers have been stuck with stalls after selling out units so they want to provide the absolute minimum, now well below city parking standards,” Mr. McKellar says, of developments in larger cities such as Vancouver and Toronto. “Developers in car-reliant cities such as Calgary and Edmonton may not be in a similar position.” He also adds that parking adds costs, in some cases, $70,000 per stall to build, and these costs are passed on to buyers.

Ms. Thompson, who is an architect as well as development lead at CMLC, says the bones of a condo and a parkade are similar. “To convert a parkade into a beautiful home requires more infrastructure, more electrical, lights,” she says. “It’s about additives, not taking away. We were careful about not adding an exterior that would have to be taken away. It really is concrete floors and a very slight slope all the way up to the top.”

But it does require more money. Mr. Dixon notes a typical parkade is built less robustly than a multifloor condo. Parkades need to support roughly 50 pounds per square foot; a residential building has to support 100 per square foot. A parkade usually has a service life of 40 years while a condo, in an ideal scenario, has one of 50 to 100 years. Light wells, which can cut into floor space, are needed to combat a parkade’s, “very deep, dark inherent properties.”

What will happen with the parkade beneath Ultima in Edmonton then? Mr. Dixon says they built flat slabs and larger floor to ceiling space to allow for different uses in future. He points to the shift towards online shopping and virtual-reality experiences as offering a potential use for the space in future, too. “New spaces are needed for these amenities, and that may be afforded through the transformation of parking garages where the concern for light-access is not the same priority as for the actual residential units. Who knows, perhaps Amazon would rather use these spaces for automated distribution warehouses of the future.” 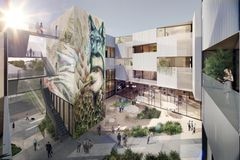 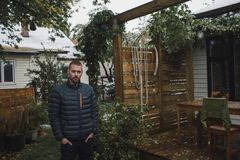 Calgary designers use their own home as testing ground for bold ideas
October 26, 2018 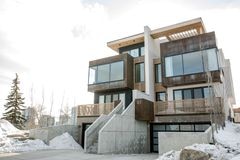