Creating unique, visually striking and affordable residential developments is one of the biggest challenges faced by architects. So imagine: a design proposal that includes not only the visual aspects of the building but also touch, acoustics, smell and feel, all of which must combine to create an affordable residential product with mass appeal.

This is the niche vocation of architecture for the visually impaired; a brand of design that is set to come to Canada for the first time as the Canadian National Institute for the Blind replaces its headquarters on Jasper Avenue with a 35-storey mixed-use tower.

“Our property in Edmonton is the oldest one we own in Canada,” says John Mulka, CNIB’s executive director and regional vice-president. “We decided a couple of years ago that it was time for a new building. We were going to replace it with something similar but because of our central location and the extensive development going on here, we decided it would be better to be part of a larger, multistorey high rise.”

Mr. Mulka recruited a team of architects, landscapers and developers and spent the next 18 months planning a commercial and residential space that last month received unanimous approval from Edmonton City Council.

“We wanted a design that both represents and serves our clientele but we also wanted to create something aesthetically striking for everyone,” he explains. “The people involved in this project hail from Montreal to San Francisco. They’re experts in multisensory design. It’s been an incredibly exciting plan to work on.”

Built in 1940, the current three-storey CNIB building started out as a residence exclusively for the visually impaired as well as housing the CNIB’s work and independent living programs.

The new building will be a sleek, metropolitan residential tower with an enviable location. Thirty-three of its 35 storeys will be rental apartments, a small percentage of which will be prioritized for CNIB clients. 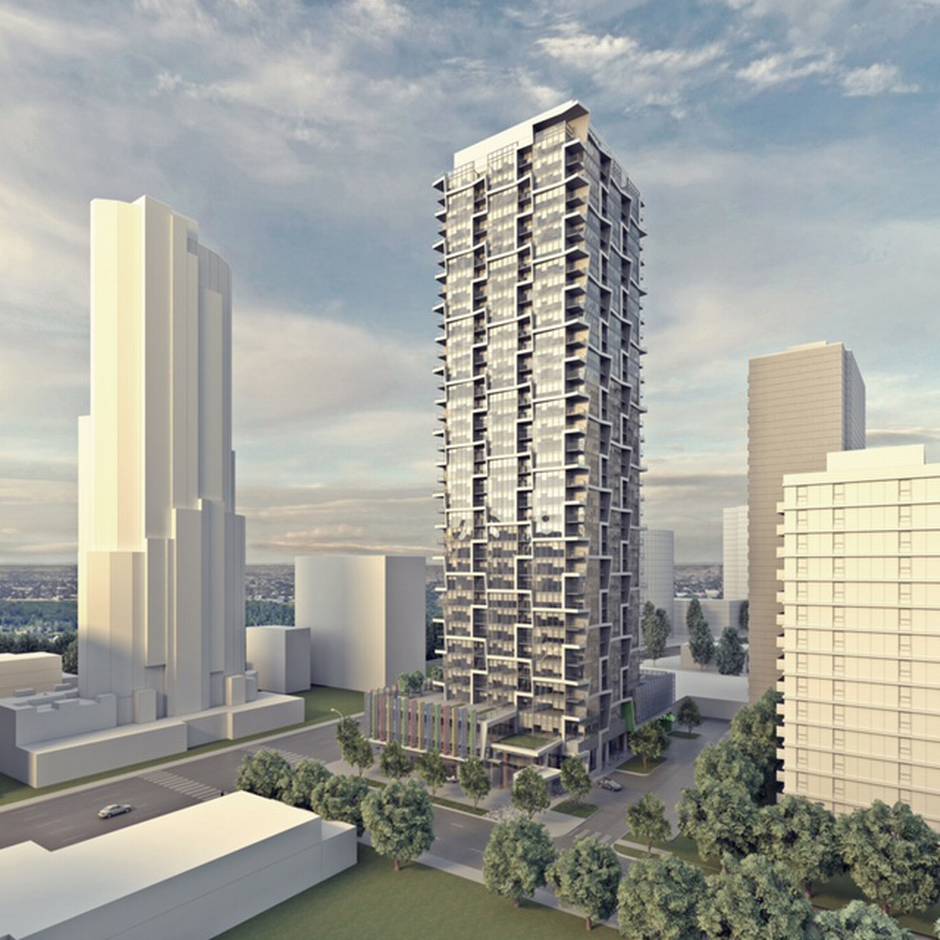 A rendering of the Canadian National Institute for the Blind headquarters in Edmonton, which will be a 35-storey mixed-use building.

The remainder will be rented to “Edmontonians looking for affordable and cosmopolitan, downtown living.” According to Mr. Mulka, interest has been “substantial.”

“The way we did things back in the fifties and sixties has changed,” he says. “It’s no longer about segregating people with a visual impairment by putting them into a group-living environment. Society’s view of disability has changed. People with disabilities can have a full and active life and this building represents that in many ways.”

“This development will make design for visual impairments indistinguishable from something that’s just good design.”

Which is where San Francisco based architect Chris Downey comes in. One of just a handful of practising blind architects in the world, Mr. Downey has made a name for himself championing cutting-edge, modern and exciting architecture for the visually impaired.

“Good design for the visually impaired shouldn’t appear different,” he says. “It should be better. Often architects design just for the eyes but architecture is about being in a space, not just seeing it. It’s about using multisensory strategies to augment the visual experience.”

Mr. Downey has been involved with the project from the outset.

“Up to this point, the street-level design has been the focus. The purpose of that is to allow the visually impaired to navigate the area immediately outside the building with ease,” he says.

“We’ll use textural patterns on the ground for cane travellers to alert them to the presence of street signs, bus stops and trash cans. We’re looking at the acoustics of the recessed entry and how that would sound to someone who is visually impaired, can they recognize it? It’s all about making that journey into the building as comfortable as possible.” 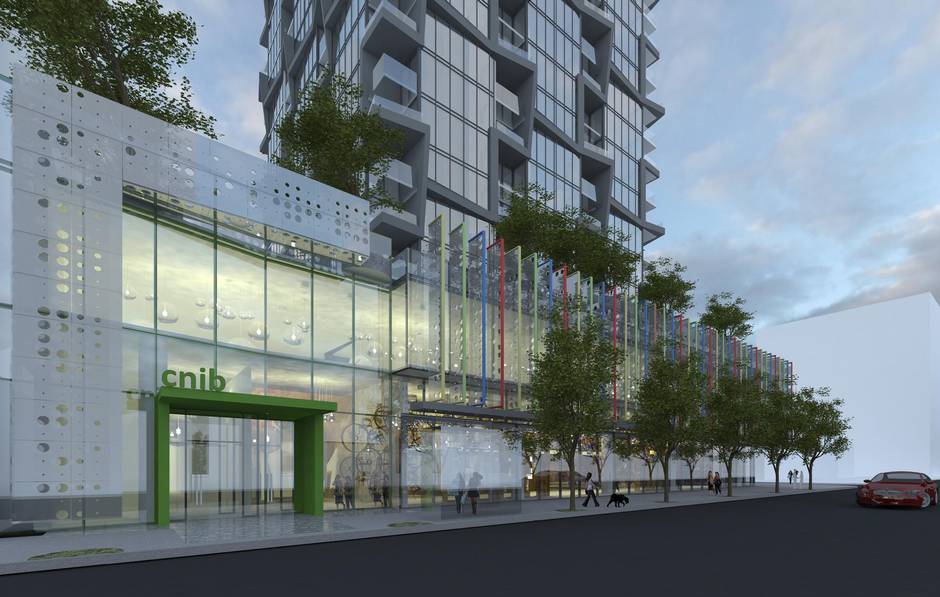 A rendering of the podium level of the CNIB building in Edmonton.

The exterior of the building will also feature a fragrance garden as well as visual prompts including contrasting coloured door frames and ground lighting. Glare will be managed for those with sensitivity to light.

“Only around 8 per cent of people with a visual impairment are totally blind. The vast majority can still see colour and light to some degree. So while it might sound strange, the visual aspect is still crucial in this project. We just have to ensure it works in the way we need it to.”

Drawing on personal experience, Mr. Downey will also be prioritizing the use of materials and textures that provide touch-friendly sensory queues.

“I remember being at a conference in an unfamiliar hotel and when I reached for a handrail I scraped my knuckles on rough plaster. It was a miserable material and a miserable experience. Texture is important. It can be extremely helpful to someone with a visual impairment or it can be uncomfortable. It’s these details which make such a difference in the day-to-day life of someone without sight.”

Technology, Mr. Downey explains, will also play an important role in the interior of the building.

“Beacons, which are like GPS for indoors, have been installed successfully in San Francisco Airport and other transport hubs around the world. It’s something the blind community is pretty excited about and we’re looking at how that could be incorporated alongside audio queuing.”

Mr. Downey lost his vision eight years ago as a result of surgery to remove a brain tumour. Prior to that he’d practised architecture for 20 years.

“There’s no doubt in my mind that I’m a better architect now,” he says. “It’s been fascinating to re-explore spaces I knew before I lost my sight. It’s completed my education. I think in more complete ways.”

For both Mr. Downey and Mr. Mulka, the benefits of seeing this project come to fruition are many.

“The rental income will certainly help provide programming for our clients,” says Mr. Mulka. “But a bigger motivating factor is raising awareness of the CNIB’s work. You can’t put a price tag on that. We plan to vacate in a year’s time for the demolition. 2018 will be our hundredth year in Canada and we’re hopeful that substantial progress will have been made by then.”

While for Mr. Downey, the goal in both life and work continues to be inspiring others to push the boundaries of possibility.

“It’s simply important to raise our level of expectation. We have to push ourselves and society at large to raise our expectations of what’s possible and achievable. To set that example of allowing yourself to dream.”