For condo-hunting Jean Guilbault, there was one feature in particular that any building absolutely had to offer if it was to make the grade: a charging station for his Tesla Model X.

Mr. Guilbault and his wife, Florence Perreault, moved into Quebec City's Woodfield-Sillery complex a year and a half ago and the condominium project's electric-vehicle-friendly garage was a key element in sealing the deal.

The 74-year-old retired transport-company executive enjoys the convenience of having a charging station right at his parking spot in the recently built Woodfield-Sillery. "I'm very happy," he said.

Mr. Guilbault is one of a growing – if still tiny – segment of condo property owners who also own an EV or hybrid car. Problem is, very few condo garages are set up for vehicle charging.

Many condo boards are only just now getting up to speed on the legal, economic, technical and logistical aspects of accommodating their members' requests for permission to charge up on-site. In a few cases that made headlines, condo owners ended up in disputes with their boards after the latter refused to allow them the right to plug in their vehicles.

Often the boards don't want to be seen to be favouring one or two condo owners by letting them tap into the common electrical supply. Or they say the costs for retrofitting some parking spots with faster-charging, individually metered systems, are prohibitive.

At the same time, boards are increasingly aware of the growing popularity of EVs and the possibility that their condo units might start losing some of their real estate value if they don't make the switch to at least partial charging-station availability.

The regulatory framework, as well, is only beginning to be sketched out.

In Quebec, the existing law is unclear and unhelpful, says Ghislain Raymond, a lawyer and condominium-law expert with De Grandpré Joli-Coeur in Montreal.

"The problem we have in Quebec is that, while there is nothing prohibiting [EV charging in condos], there is also nothing easing the way," he said.

More condo boards would be receptive to the concept if there were clear guidelines and rules on what rights owners and boards have when it comes to setting up, maintaining and managing EV chargers, Mr. Raymond said.

In Ontario, the government recently unveiled proposed modifications to the Condominium Act that would smooth the path to getting EV charging stations in condos. The proposals include: cutting some of the red tape to allow for changes to common elements, assets of the corporation or services provided by the corporation so as to make room for charging stations; obliging corporations to install stations upon an owner's request, so long as certain conditions are met; lowering the threshold for owners' support of changes allowing for parking-spot swaps to facilitate access to a charging station.

"Those would be a big step in the right direction because right now we have a situation where condo boards can just say no if they like," said Cara Clairman, president and chief executive of Plug'n Drive, an Ontario non-profit organization promoting EV use. There are legitimate cases where there is simply not enough electrical power or appropriate infrastructure in a building to accommodate charging stations at a reasonable cost, she said. "In those cases, what we need is more public charging in the vicinity."

Ms. Clairman's advice to EV-driving condo owners is to find like-minded people in their building and discuss the option of grouping their currently scattered parking spots into one common area of, say, five EV charging places, ideally as close as possible to the electrical supply source to reduce costs.

In British Columbia, the government encourages condos and apartment building managers to install charging stations. Metro Vancouver offers installation tips and the Condominium Home Owners Association of BC, in partnership with the Ministry of Energy, Mines and Petroleum Resources, offers a guidebook on installation options.

Not surprisingly, California is out in front on the issue. The law in that state requires condominium corporations to permit EV charging stations as long as users pay for the installation, maintenance and electricity use.

Mark Marmer of Markham, Ont.-based electrical contractor Signature Electric Ltd., says many condo boards are confused right now about what they can and cannot do on the EV-charging front.

"At the moment, it's very complex and cumbersome for condo boards, even if they want to do something. There are a lot of different little details, a whole education process before you can even get the attention of the board."

Mr. Marmer says he's getting more and more calls from condo corporations inquiring about how to get ready for the anticipated changes to the Condominium Act and possible updates to other provincial regulations as part of Ontario's efforts to reduce the carbon footprint by boosting EV use.

Investing now in charging-station infrastructure can end up paying off, he adds. "You can make your building stand out a little ahead of the others."

Chris Jaglowitz, a partner at Toronto law firm Gardiner Miller Arnold LLP, agrees. "With each passing day, people and condo boards are becoming receptive to installing these things," he said. "More condo boards than not are open to it." Often, the problem is ironing out all the logistical problems, he said. "Each building is different. Each condo corporation has its own issues," said Mr. Jaglowitz, who specializes in condo law.

New condo buildings are better positioned to avoid all those retrofitting headaches with construction plans that integrate the infrastructure to accommodate charge-station installation.

At Mr. Guilbault's building in Quebec City, for example, all the wiring is in place for the installation of charging stations in the three-level garage. "We figured it would provide us with some value-added or at least give us the jump on this should there be a generalized adoption of EVs," said Eric Bilodeau of Bilodeau Immobilier, the owner of Woodfield-Sillery.

Woodfield-Sillery has a deal with AddÉnergie – a Quebec City-based provider of electric charging systems and networks – for the installation of Level 2, 220-volt fast-charging stations at the request of individual condo owners.

Besides Mr. Guilbault, there is a second resident who has asked for a charger and a few others have expressed interest, Mr. Bilodeau says. AddÉnergie handles every aspect of its turnkey charging solution: installation of an independent transformer and the individual charging stations, monitoring of electricity use by subscribers, billing of the customer.

Mr. Guilbault says the monthly bill to charge his Tesla is about $80. One-time installation fees were in the $400 range.

Louis Tremblay, president and CEO of Flo – the consumer-branded subsidiary of AddÉnergie – says the aim is to make EV charging-station adoption in condos as easy as hooking up to cable or satellite TV.

"We're doing a lot of evangelizing along these lines," he said.

"We're like the companies when cable TV was just getting started." 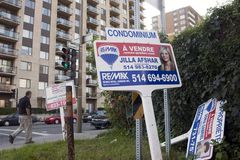 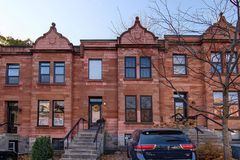 Follow Bertrand Marotte on Twitter @globemontreal
Report an error Editorial code of conduct
Due to technical reasons, we have temporarily removed commenting from our articles. We hope to have this fixed soon. Thank you for your patience. If you are looking to give feedback on our new site, please send it along to feedback@globeandmail.com. If you want to write a letter to the editor, please forward to letters@globeandmail.com.
Comments are closed