The East Vancouver Portlands area is a unique neighbourhood with a colourful history. One of the city's oldest, it was established in 1863 as "New Brighton" and became a popular weekend retreat for residents of the province's then capital New Westminster. Where the present day New Brighton Park and Cascadia Wheat pool now stand, the New Brighton Hotel once offered a floating wharf and steamer excursions.

The arrival of the railway in 1885 increased the town site settlement considerably and the CPR extension from Port Moody to Granville facilitated industrial development. Construction of streetcar lines along McGill and Hastings Street also encouraged growth and the area became part of the city of Vancouver in 1911.

The neighbourhood is still a rich layering of the residential, the commercial and the recreational, bordered as it is by the PNE and the railway and industrial waterfront. And it still retains a certain stand-alone quality, with wide streetscapes and stunning water and mountain views that make it feel like a unique civic enclave.

In a way, this place is the Point Grey of East Vancouver, but remains one of the last affordable places to buy waterfront real estate – and all at a mere 10 minute commute to downtown.

Lennie Moy, president of Aragon Properties, a Vancouver and Hamilton based development company known for working with unique and often challenging sites, saw the potential of the area back in 2004. He engaged Merrick Architects to design a residential development at the Eastern edge of Wall Street. At the time, the only significant new housing project was the 1997 live/work loft building named Cannery Row – at the Western end of Wall Street.

Today, as you wind your way eastward along Wall Street, a few blocks of three-storey rental buildings give way to a variegated stock of 1970s and pre-war housing – a couple of old wooden houses with vaguely riverine references met by the odd Vancouver special and post war bungalow. And then you arrive at the site of the new Avant development – finally a reality some seven years, much community consultation and two architects later.

The sloped site is bordered by the railway to the North and effectively bridges the residential part of Wall Street to the West, with the industrial area to the East (a warehouse and a grain elevator its immediate neighbours). Avant is both elevated and insulated by a concrete parkade that acts as both a view maximizing platform and an acoustic buffer from the working CPR line.

The extensive community consultation process necessary to build in the tight knit, proactive community, continued even after 2004, when Ramsay Worden Architects stepped in. With Doug Ramsay as lead architect, neighbours' concerns about view and density issues were addressed with imaginative yet carefully considered design.

Mr. Ramsay essentially broke down the scale and the massing of the original plans, by creating a series of stacked town homes with landscaped view corridors. The 48 long, thin homes aligned perpendicular to Wall Street are book ended by smaller units. To the East, three one-storey apartments slope downwards, toward the adjoining warehouse. On the Western edge of the site, a three-storey single family home, nestled up against the residential edge of the street and buffered by a small park, stands like a singular installation – almost an ode to the homes it borders.

Everywhere there is an attempt to engage with the surrounding houses, and landscaping blurs the distinction between private and semi-public areas. There are no gates, no walls, but rather a friendly neighbourhood feel. Every unit has an individual entry and most have front porches. It's an unusual combination of modern, higher density design and more traditional single-family home approach to streetscape.

There is an interesting interplay between the angled and the oblique, aimed at maximizing views that create a dynamic sense of movement throughout. Long, narrow bay windows are angled out to take in the view, and sloped, seam metal industrial style roofs, are counterbalanced by flat, secondary roofs that mitigate rainwater but also offer geometric texture.

'What appealed to us about Doug's design," says David Roppel, Aragon's director of planning and development, "was how he took an industrial aesthetic and crafted thoughtful detailing." Details like black painted pipe handrails, metal canopy brackets and round painted metal columns, make for sophisticated layering. The brick façade – chosen both for its industrial reference and also for its acoustic buffering properties – offers further textural contrast.

Indeed the ruggedness of the site is counter-balanced by high quality finishes and luxurious interiors, like marble countertops and deep Koehler tubs in the bathrooms, solid wood doors, and oak flooring. Most units feature a great hall style living/dining/kitchen area that opens up to the expansive view and bedrooms flanked by double glazed noise reducing enclosed balconies. Many units also feature dramatic roof top patios, approached by narrow light filled stairwells that lead to skylights that open up like hatches. The effect is not unlike a Parisian roof top garret, albeit one that embraces dramatic views of mountains and industrial waterfront.

With a geothermal heating system that ensures warm winters and cool summers – and mitigates noise factors as glazing can remain closed as the homes remain ventilated – this is a much more comfortable take on the area's (particularly to the West of Avant) many live/work lofts.

Just as the project bridges the residential and industrial wings of Wall Street, so too does it offer a happy marriage between modernist chic and cosier creature comforts. Avant is really the perfect abode for those who crave the edginess of the raw industrial landscape that has inspired so many artists and "cultural creatives" in the area, but insist on luxurious domesticity. 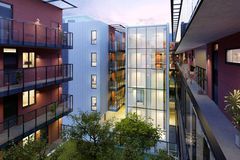 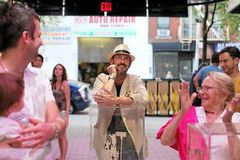 Condo in the rough
September 9, 2011
Follow us on Twitter @globeandmail Opens in a new window
Report an error Editorial code of conduct
Due to technical reasons, we have temporarily removed commenting from our articles. We hope to have this fixed soon. Thank you for your patience. If you are looking to give feedback on our new site, please send it along to feedback@globeandmail.com. If you want to write a letter to the editor, please forward to letters@globeandmail.com.
Comments