As the COVID-19 pandemic continues to dampen economic activity across Canada, building supply and home builders’ organizations are advocating for a potential solution: home renovation tax credits. Member associations of the Building Materials Council of Canada, each representing different regions of the country, have been lobbying the federal and some provincial governments to instate a home renovation tax credit similar to the 2009 tax credit implemented by the Harper government.

Other supportive organizations include the Building Industry and Land Development Association (BILD) and the Canadian Home Builders’ Association (CHBA).

In a 42-page July proposal commissioned for the Standing Committee on Finance and Financial Affairs, the four building supply associations underscore home improvement as a significant contributor to the economy, saying all sectors benefit when construction and renovations are vibrant.

In Canada, building-supplies dealers make up more than 8,300 stores employing 147,000 staff. The sector generated approximately $38.4-billion in retail sales in 2019, and operating expenses associated with that revenue were $10.8-billion.

Thomas Foreman of the BSIA of BC says members of the industry are in 1,600 communities across Canada, spending and staffing locally. “In our industry, a high percentage of what we sell is manufactured, produced, warehoused, distributed [in Canada],” he said, comparing it favourably to other industries such as automobiles and clothing, where products are often manufactured overseas.

In letters to the Prime Minister and the Leader of the Opposition, the associations highlighted this direct tie to Canadian manufacturing as a reason their sector is “more economically important than other retail sectors.”

“We need their support by coming up with a program that we did in the past when our economy was slow,” Mr. Foreman said.

In 2009, after the recession, the Conservative government implemented a temporary 15-per-cent tax credit (HRTC) for eligible home renovation expenditures to help reboot the economy. In a review of the tax credit program, TD Economics credited the HRTC as the reason that renovation spending was the only major component of GDP that grew in 2009, by an estimated $3-billion to 4-billion.

CHBA chief executive officer Kevin Lee pointed to the recent Altus report showing a downturn in Canadian home renovation spending as proof of renovation’s economic significance, saying more than 700,000 jobs in Canada each year are directly or indirectly contingent on the sector’s success. That’s why his organization is supporting a permanent renovation tax credit. He said the program would “pay for itself” by ensuring GST and income tax are paid on jobs instead of the money going to under-the-table home renovation contracts.

“A tax credit … makes people get contracts. It makes people get receipts,” Mr. Lee said. “It’s going to be really important to continue to help renovation continue and to be a big part of economic recovery, as construction usually is when you’re trying to come out of any economic downturn.”

Dave Wilkes, BILD CEO and president, advocates the aging-in-place benefits he says a home-reno tax credit could have in light of COVID-related challenges to retirement living situations. He called it a “very positive thing from a government policy perspective and a societal one,” citing projects such as built-in “nanny suites” and walk-in bath tubs as tools to allow seniors to stay in their own homes instead of moving into riskier facilities.

WRLA, the largest building supply association in Canada, represents 1,200 members across Manitoba, Saskatchewan, Alberta, British Columbia, Northwest Territories, Northwestern Ontario, Yukon and Nunavut. Its president, Liz Kovach, is particularly focused on the environmental impact a permanent tax credit program could have: “It will encourage people to spend money on their homes to make them more energy-efficient, and it will help us as a nation start to work toward climate strategy programs,” she said.

While Ms. Kovach said there are days she feels like a “government stalker,” sending so many letters and e-mails, she added that she feels encouraged by initial discussion. WRLA has proposed a cost-share program between the provinces and federal government because, while provinces would “like to be able to help the residents of their provinces make their homes energy efficient,” tax credit programs are costly.

Over e-mail, a Department of Finance official stated, “Homeowners across Canada deserve to know that their government will be there for them to help lower costs and make homes more efficient.”

“That is why we are committed to supporting Canadian homeowners and the building supply industry through both investments and the tax system’s support for homeownership. In 2019 alone, building construction received $181.8-billion in investments, which supported nearly 1.5 million jobs.”

The government is also adapting the Investing in Canada Infrastructure Program to respond to the pandemic’s impact through a new temporary COVID-19 Resilience stream. The stream offers more than $3-billion to provide provinces and territories with the flexibility to fund quick-start, short-term projects that may not otherwise be eligible under existing funding streams.

Eligible projects under the new stream include retrofits, repairs and upgrades for municipal, territorial, provincial and Indigenous buildings, health infrastructure and schools.

In terms of an explicit federal tax credit guarantee, “we’ve heard some rumblings and we’ve asked some questions,” Ms. Kovach says, “but no one’s actually come back with a commitment yet.”

In the meantime, building supply associations continue to lobby for their desired permanent tax credit program. “We believe it is cost-neutral, it would encourage people to avoid the underground economy, and it would certainly provide opportunities to improve energy efficiency and allow people to stay in their homes longer,” Mr. Wilkes said.

Mr. Foreman underscored the uncertain timeframe of the pandemic as motivation to proceed.

“We want to make sure our sector’s health continues to happen,” he said. “Because if this rotten virus continues to affect us, we’re going to need this many good, solid programs to keep the economy moving.” 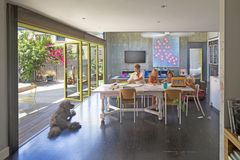