Yvonne Mazur and Matt Aggus, both project managers, first met in 2015. As their relationship progressed and they started thinking about having children, there was little doubt they would one day live in Ms. Mazur’s house in Toronto’s Junction neighbourhood. The home had issues – poky bedrooms with no closets, peeling faux-brick siding and a poorly insulated kitchen addition that either made the two sweat in the summer months or shiver during the winter. But it also had a key redeeming feature: sentimental value.“My parents came to Canada from Poland in 1970,” Ms. Mazur says. “They rented for many, many years until my mom pushed my dad to get a house. She wanted to start a family. And so in 1976, they bought a simple, wood-frame home. I think they paid $56,000, which gives a sense of how prices have changed.”

Ms. Mazur, who was born in 1978, remembers running around in the yard as a child and could imagine her own kids doing the same one day. She also wanted to honour her father’s wishes. He passed away in the late 1990s leaving her the property, saying before he died that he hoped it could stay in the family and get passed down through the generations – a lasting, physical legacy of the family’s Canadian dream.

Although selling the home was out of the question, both Ms. Mazur and Mr. Aggus thought her father would approve of putting up something new and better for his grandchildren and great-grandchildren to come. “There wasn’t a lot to salvage with the existing structure,” Mr. Aggus says. ”But we knew we could make something nice – for our kids, as well as to entertain our immediate families, which was hard to do before.”

As inspiration for their rebuild, the couple looked to a shared passion.

“On our first date we realized we both wanted to sail,” Ms. Mazur says.

“One of the first big things we did together as a couple was buy a sail boat,” Mr. Aggus says.

Spending time on the water taught Ms. Mazur and Mr. Aggus valuable design lessons, both in terms of aesthetics and functionality. Boats tend to be lined with wood, creating a home vibe even when far out at sea. And aside from mega-yachts, their interiors are ruthlessly compact, cramming sleeping, eating and bathing spaces into very compact spaces. Seeing efficiency gave them the confidence that they could fit a lot of rooms – four bedrooms, two full baths, a powder room, scads of storage everywhere and an open-concept living-dining-kitchen space plus a second-storey den – all within 1,800 square feet – a small enough footprint to protect as much of the aforementioned yard as possible.

The interest in having lots of wood helped the couple find their architect, Yvonne Popovska. Ms. Popovska was a childhood friend of Ms. Mazur. But the two had long lost touch, reconnecting after Ms. Mazur noticed and liked Ms. Popovska’s work.

Before launching her own firm, DPo Architecture, Ms. Popovska co-designed a home in Vancouver with her partner, Leland Dadson – a place where simple concrete blocks are enlivened with a heavy timber ceiling and custom wood millwork.

“My architecture preferences used to be very traditional – Victorian, Tudor, Queen Anne,” Ms. Mazur says. “I used to work in an architecture office and everyone made fun of me. Then I saw the house Yvonne and Leland designed in Vancouver published and a light went off. I just loved that it was modern but not cold. It looked so inviting.”

For Ms. Mazur and Mr. Aggus, Ms. Popovska created a similar atmosphere, this time almost entirely using wood and no concrete blocks. On first glance, the exterior is a bit forbidding, clad in a black-painted, engineered lumber siding called Maibec from Quebec. As guests approach, the main volume of the house cuts away around the front entry and the colour switches to a soft honey-tone (also Maibec), welcoming visitors to either go inside or linger on the deck. The stark contrast helps accentuate the warmer tones.

Throughout the interiors, blonde oak millwork, window casings and floors imbue a family-friendly coziness. A wood-burning Stuv oven in the family room provides enough heat to forego electric HVAC for much of the fall and early winter.

“I love using wood because its more sustainable to produce,” Ms. Popovska says. “But a lot of clients come to me and say, ‘We don’t want wood.’ Especially outside, they don’t want materials they have to maintain. With Matt and Yvonne, because they are used to maintaining wood on their boat, I knew they could take care of their house as well.” (Maibec typically requires repainting every six to 10 years).

From boat designs more generally, Ms. Poposvka also “looked at how to fit toilets in small spaces,” she says, to accommodate the desired number of bedrooms and bathrooms within the allotted square footage. “Some of the bathrooms are a bit tight, but they work.” No inches are wasted with ultrawide counters or huge sinks. A skylight over the ensuite gives a roomier feel by drawing more light.

For the first part of the construction, Ms. Mazur and Mr. Aggus lived in their own sail boat, docked on Toronto Island. At that point, the couple had had their first baby and were expecting another. Boat living proved difficult. “We didn’t have hot water for a while,” Ms. Mazur says. “The heater exploded. We had problems.”

“At the outset, we were thinking of living on the boat year round,” Mr. Aggus says. “In the winter, for the remainder of the construction, we moved to a condo.”

Postconstruction and now well into their COVID-enforced stay-cation, the couple is happy to be on solid ground, surrounded by physical reminders of boat life – all the wood – without the lost-at-sea feeling. “I love the house so much,” Ms. Mazur says. “After it was built I didn’t want to leave. Now I can’t leave. But I appreciate sitting by the wood-stove or staring out at the trees in the backyard. Why would I want to go anywhere else?” 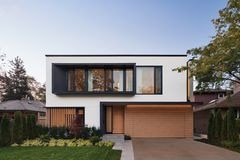 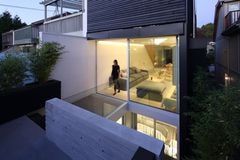 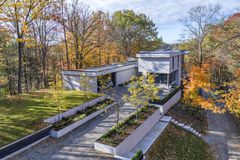