Timeless taste, beer money: a $65-million mansion for the ages

On Oakville’s ‘Gold Coast,’ former CEO of Interbrew models retirement home on an old English manor only to see it become an empty nest 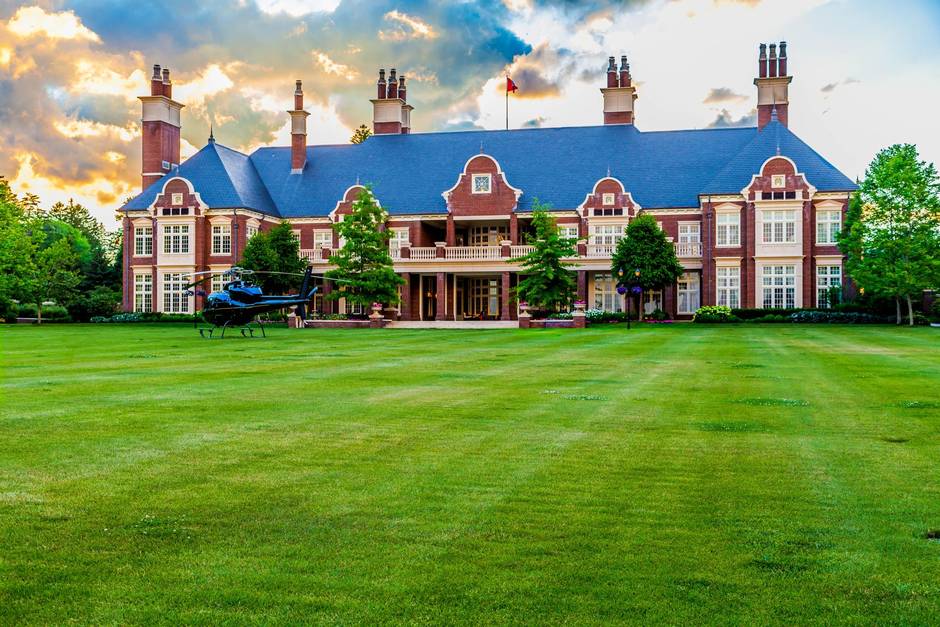 This $65-million Oakville, Ont., house, named Chelster Hall, is 47,000 square feet and was built over a period of five years.

Hugo Powell didn’t have a lot of money when he emigrated from Britain to Canada as a young man in 1971. Looking back, he recalls the time he saw an intriguing mechanical music box in London’s Portobello Road but didn’t have the £20 (or about $50 then) it cost to buy it. If he had some spare cash some day, he decided, he’d return to buy a music box.

“I will be patient. I will come back,” he promised himself. 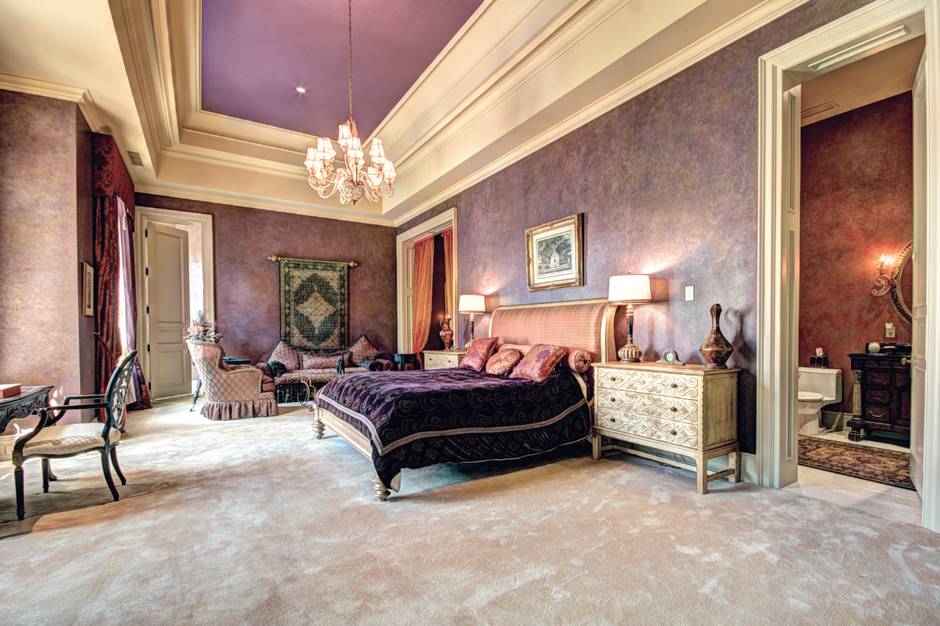 The mansion has six bedrooms, including themed guest suites such as the Tuscany Suite and – for the youngest visitors – the Magic Kingdom.

In Canada, Mr. Powell entered the business world and climbed through the ranks of Labatt Brewing Co. Ltd. to become president. He was at the helm when the Labatt-owned Toronto Blue Jays won back-to-back World Series in 1992 and 1993. He was still running the iconic Canadian beer maker when it was acquired by Interbrew SA of Belgium in 1995. Four years later, he was on his way to Brussells to take the top job at the parent company.

As chief executive officer of Interbrew, Mr. Powell took the company public and set out on a global acquisition tear. Some of the brewer’s purchases were controversial – including the 2000 deal to swallow Britain’s Bass Brewers. British antitrust regulators forced Interbrew to sell the key Carling brand that was part of the deal.

When Mr. Powell stepped down as CEO in 2002 he had already started planning for his return to Canada with his wife, Tracy, and their young daughter Britany. They decided to settle in Oakville so that Britany could attend the all-girls St. Mildred’s-Lightbourn School.

Mr. Powell enlisted architect William Hicks to design a house that would endure through the centuries on the shore of Lake Ontario. 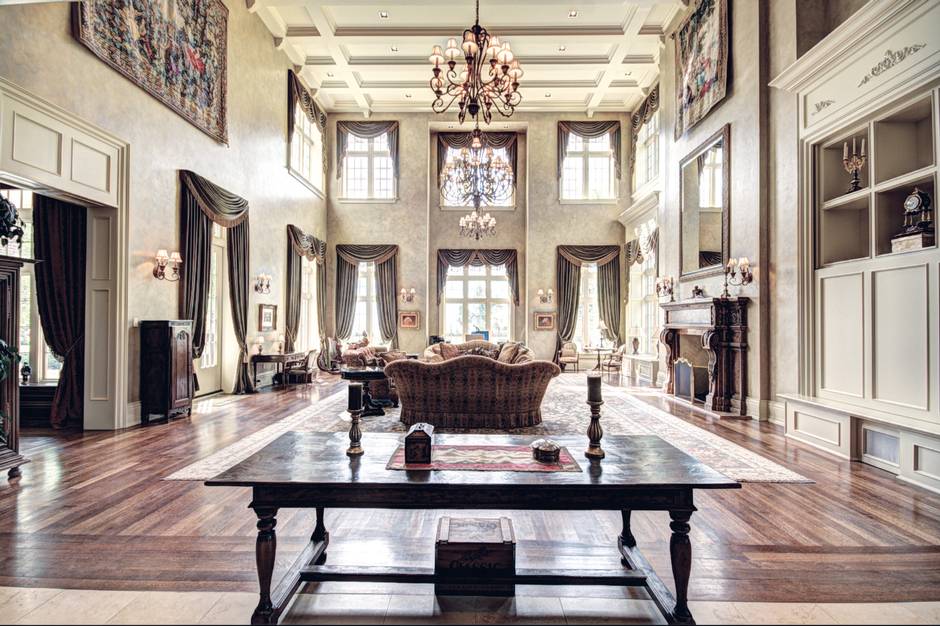 During his own education in England, Mr. Powell would often wander through the rooms and gardens of Blickling Hall in Norfolk. The manor home that once belonged to the family of Anne Boleyn has been in the care of the National Trust since 1940.

Mr. Hicks designed a building that would replicate the Jacobean architecture of Blickling, with the Dutch gables columns and curving ornamentation characteristic of that style.

Meantime, real estate agent Christopher Invidiata was piecing together the 10 acres of land on a stretch of shore known as Oakville’s “Gold Coast.” Then followed a great deal of bargaining with neighbouring property owners and town planners.

News reports of the day compared the square footage with the U.S. White House, which measures 54,000 square feet. During negotiations, Mr. Powell agreed to decrease the size to about 47,000 square feet. There are several outbuildings, including a chapel, a gatehouse and a lakeside pavilion.

Construction began in 2001 and was completed in 2006. Mr. Powell insisted on using a few thousand tonnes of concrete and steel throughout the dwelling so that it would remain standing for centuries. Blickling Hall is now more than 500 years old, he points out. 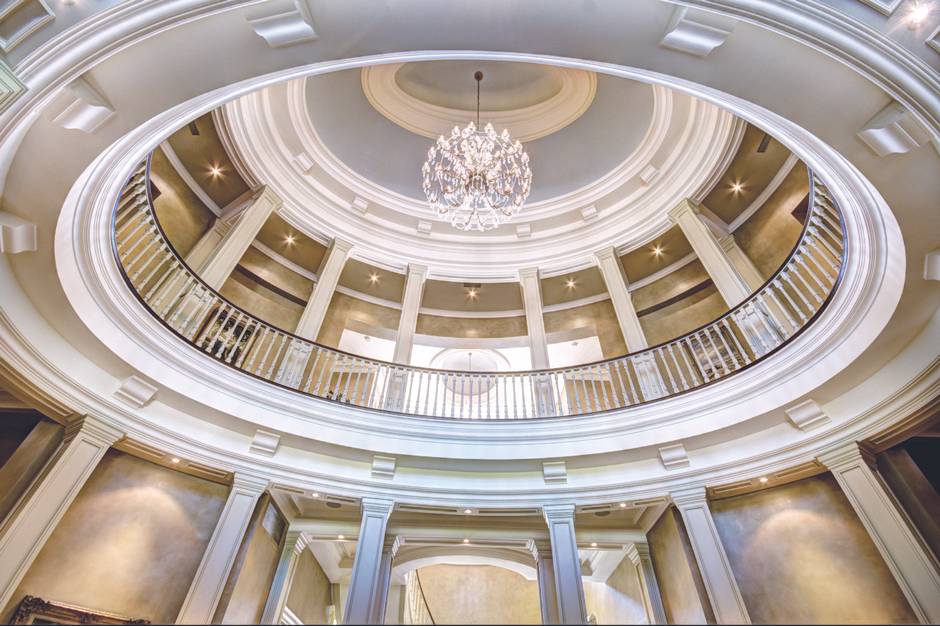 To achieve the correct look, the domed ceiling in the foyer was torn down several times and redone.

The work was also painstaking; some smaller contractors were too daunted by the job to even attempt it. The domed ceiling in the foyer, for example, had to be torn down three times and redone because the craftsmen couldn’t get it right.

A plaque was placed at the entrance to identify the house to passers-by as Chelster Hall. The moniker is a combination of the names of the family’s two late golden retrievers, Lady Chelsea and Manchester.

The property is exceptionally sheltered, with a gatehouse and a double set of entrance gates.

Mr. Powell decided on two sets of gates after being robbed at gunpoint in the family home shortly after arriving to live in Brussels. Thieves were after a luxury car and they had to accost Mr. Powell in order to get the keys. Having double gates acts as a deterrent, he explains, because it’s more difficult for intruders to get in and to make their escape.

But, despite their yearning for seclusion, once a year the family opens the gates to host a charity event on the grounds. Past beneficiaries have included the Oakville Chamber Orchestra, the local library and the Oakville Humane Society.

“It was always our intention that the home be part of the community if we could find a graceful way of doing it.” 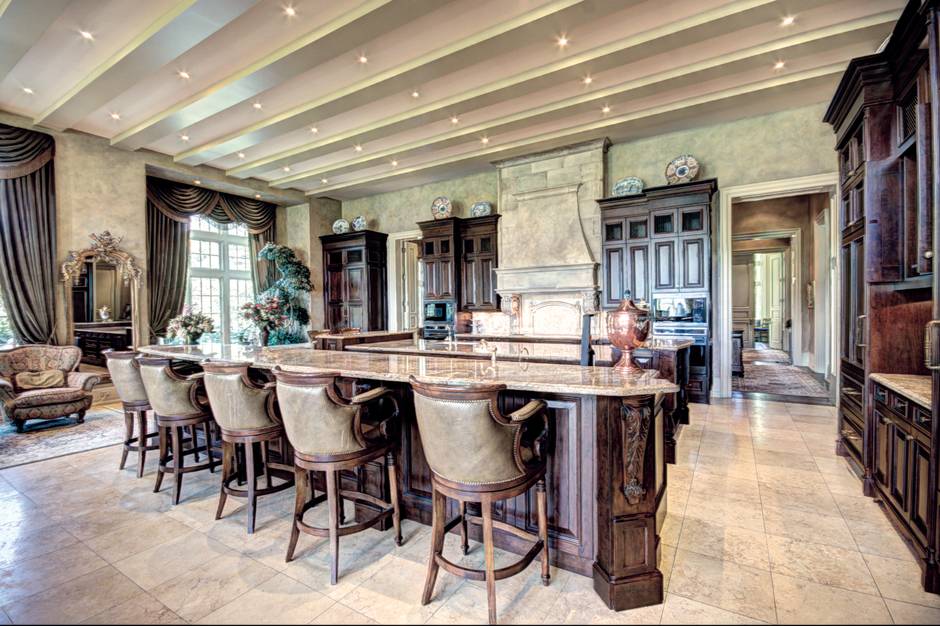 The combined kitchen and family room brings in a modern design element to the classic style.

While the exterior closely resembles Blickling, Mr. Hicks and his firm designed the interior for a much more modern family. There’s a large combined kitchen and family room where the Powells live about 90 per cent of the time with a new generation of golden retrievers and a rescued Hungarian Kuvasz.

Throughout the house, Mr. Powell says, they tried to identify a core concept for each of the main rooms. The size of the house means little – it’s the proportions of each room and the height of the ceilings that make it feel comfortable, he says.

“We’ve paid attention to cubic space,” he says, adding that some people are surprised the house has only six bedrooms. There are also 12 bathrooms. The main house has about 28,000 square feet of above-ground living space and tallies $484,596 annually in operating expenses. 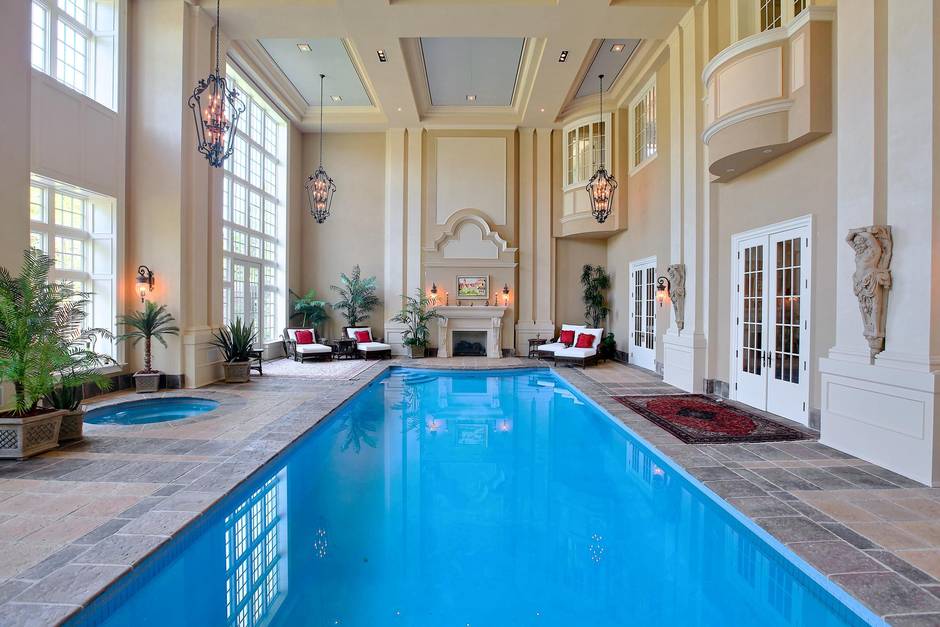 Chelster Hall has an orangerie housing the indoor pool on the main floor. There's another swimming pool, as well as a tennis court, outside.

On the ground floor, there’s an English library, an orangerie housing the indoor pool, and a lounge that replicates the wine bar at the famed George V hotel in Paris.

The two-storey library holds approximately 4,000 volumes. It took 12 people just to carry in the column for the cast iron spiral staircase that links the two levels. Upstairs, the family’s medals, heirloom photographs and memorabilia are on display. In one photo, Mr. Powell is in animated conversation with Cuban leader Fidel Castro. He was in Cuba to negotiate a partnership for bringing in Labatt’s Blue.

Mr. Powell removes a crimson cover to unveil the long-anticipated music box: a Swiss-made Reuge. He explains that the “brilliant mathematical calculation” required to create the mechanical player enclosed in precious woods.

“We were fortunate to have enough space,” Mr. Powell says of the surrounding items. “They live.” 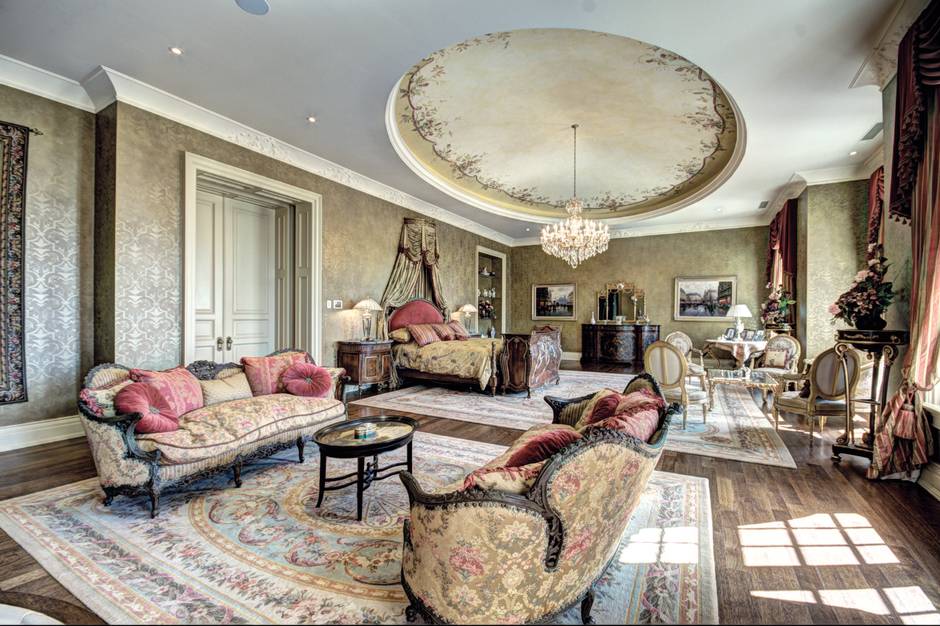 With their daughter away at school, the Powells find the house too large. Mr. Powell hopes it will be loved by a family or even turned into a private school or corporate retreat.

The guest bedrooms have such themes as the Maharaja Suite, the Tuscany Suite and – for the youngest visitors – the Magic Kingdom.

Outside, there’s a swimming pool beside the lake and a tennis court in a secluded setting.

A few of the other amenities include a bowling alley, home theatre, 7,000-bottle wine cellar, underground parking for 12 cars and a separate guest apartment with a private entrance.

Mr. Powell says the couple finds the house too large, now that their daughter is at the University of Toronto and everyone is pursuing their own interests outside the home. He says he is satisfied to leave it as a legacy building.

“We come and go but the home will be here a long time.”

As for the $65-million asking price, Mr. Powell and Mr. Invidiata looked at constructions costs, land value and replacement cost. The house sits on 330 feet of shoreline. 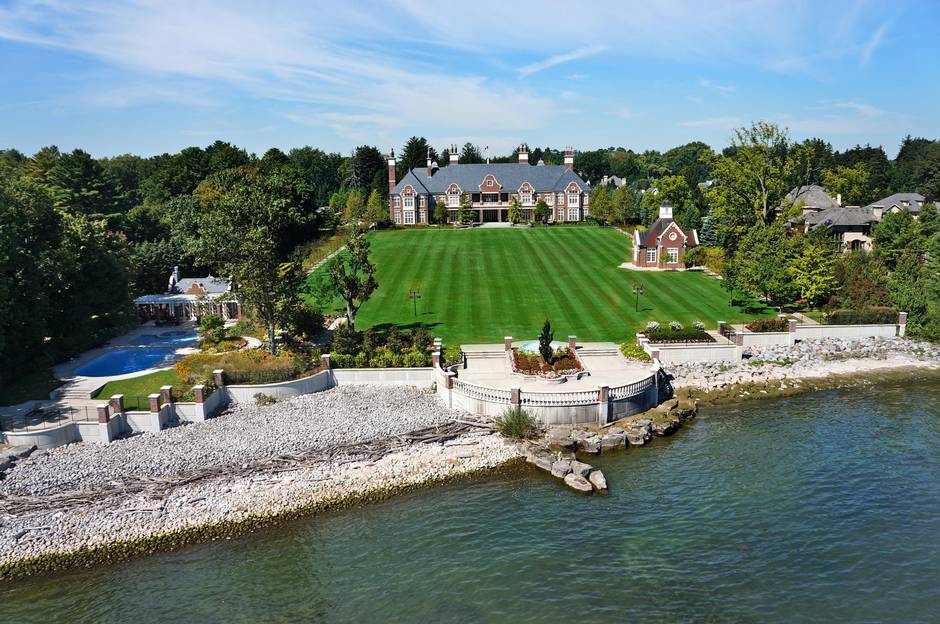 Mr. Invidiata hesitates to say the asking price is the highest in Canada or that the house is the largest, because many properties in that stratosphere change hands privately. He also points to the high cost of luxury properties in Vancouver. He figures it’s safe to say Chelster Hall is in the top 10 on both measures.

The agent believes summer is the appropriate time to list a house with such a limited pool of buyers for sale. Entrepreneurs and business titans are less occupied in the summer, he says, and they have time to bring their families along to look at a property.

“Most of the big properties sell in the quiet months,” Mr. Invidiata says, “and that holds true for global sales.”

As for who the buyer might be, Mr. Powell says long-lived buildings have chapters and he imagines that a future owner will create a new one. He hopes that it will be loved and enhanced, he says, by a family or even an institution. Thinking of the library, chapel or the grounds, he can envision it as a private school or a corporate retreat.

“I think there is so much to inspire,” he says. “A more interesting conversation is to ask, ‘what are you dreaming for it?’ ” 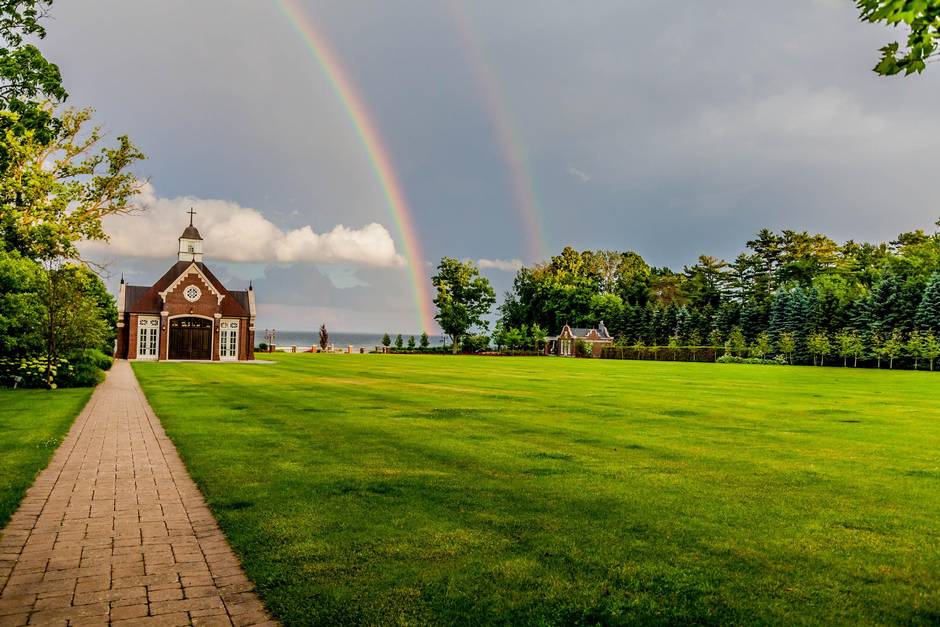 A private chapel dedicated to St. Francis of Assisi is located on the grounds, close to the lake.

The private chapel is dedicated to St. Francis of Assisi, the patron saint of animals. The small building sits away from the main house and close to the water. In the early morning, the rising sun in the morning illuminates the interior.

Mr. Powell says the chapel is a place for quiet contemplation and prayer. Visitors who sit in one of its wooden pews and listen to music are often overcome by emotion.

“I don’t recall people listening to music without shedding a tear,” he says. “It’s powerful. Without being religious, it has a presence.”