Skip to main content
WILL JONES
Special to The Globe and Mail
Published May 5, 2016

Space, especially lettable square footage, is tantamount to priceless in downtown Toronto and it’s easy to see why developers and designers are tempted to cram as much as possible into every new build or renovation.

But every once in a while comes something a little more cerebral – something beyond the glass-box skyscrapers, century-old homes morphed into multiple apartments or lane-way parking spaces turned into quirky designer pads. 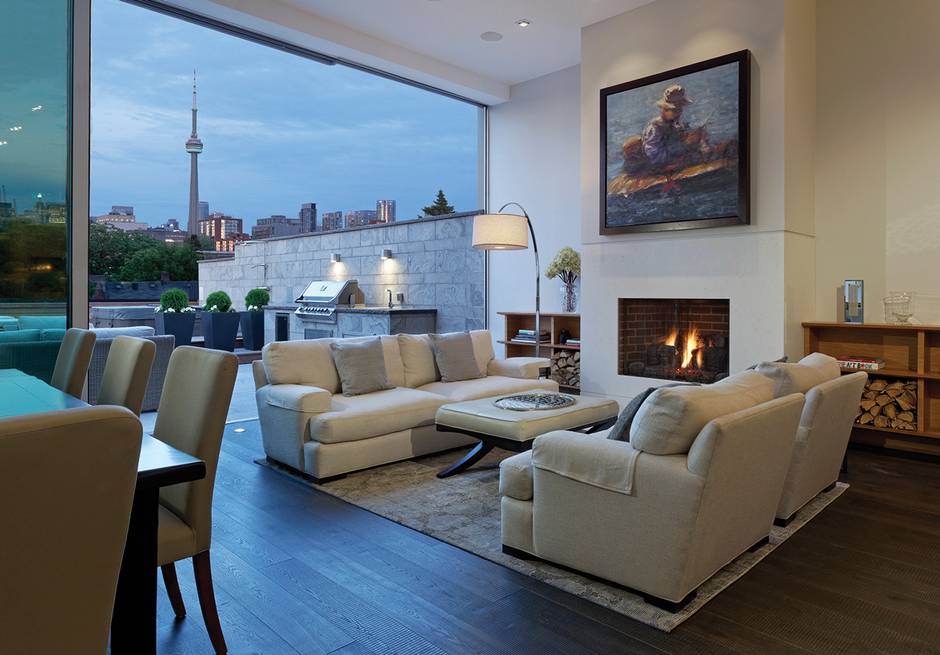 The glazed walls leading from the master bedroom on the second floor and the living/dining space on the third floor comprise huge, sliding glass panels. (David Whittaker)

An industrial building in the Trinity Bellwoods area has been transformed into a connected quartet of utterly modern townhouses on a street with a mishmash of architectural styles. The structural reorganization and external façade design was the preserve of Stamp Architecture. However, it is inside one of these 5,500 square foot shells that architect Peter Berton, partner-in-charge of Ventin Group (+VG), assisted by designer Pietro Frenguelli, redefines space and manipulates light to create a modern, five-bedroom home that both maximizes livability and creates wow factor. .

“Without a problem, there is not much of a solution,” Mr. Berton says, as we wander through the bright, naturally lit living spaces of the home’s third and uppermost floor on a sunny, early spring afternoon. “Our problems, or challenges, here were twofold: namely, the verticality of the space, and, the need to bring light into the interior of a home that has no windows on its long side elevations.” 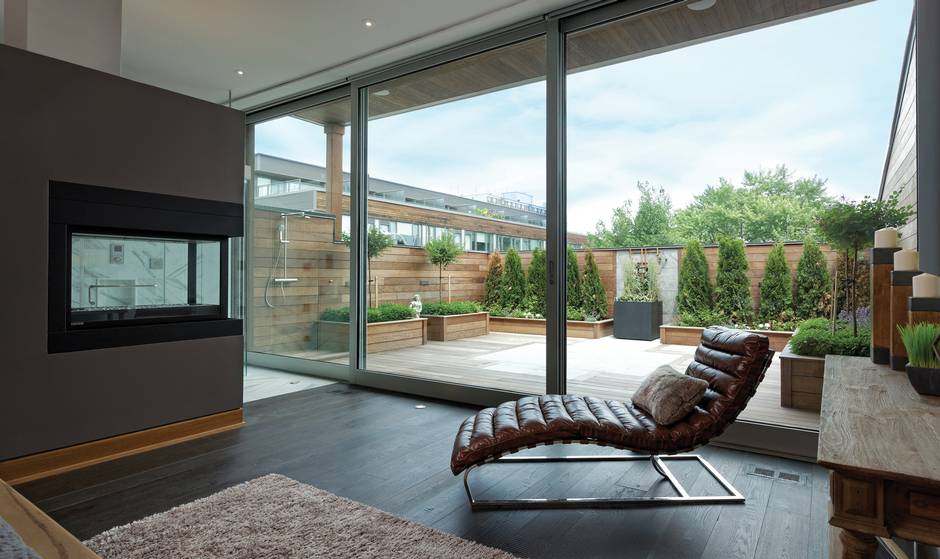 A partition with a built-in fireplace divides the master bedroom and bathroom. (David Whittaker)

The house is 25-by-100-feet with 12-foot ceilings; the southern wall partitions the industrial building, while the northern aspect remains blank because of fire-safety constraints. As such, the architect chose to throw open the east and west ends by cladding the second and third storeys in glass. The glazed walls leading from the master bedroom on the second floor and the living/dining space on the third floor (out onto the main deck with BBQ, fireplace, hot-tub and outdoor shower) comprise huge, sliding glass panels, each measuring eight-by-12-feet and weighing 1,600 pounds.

Sealed tightly shut on a winter’s day, natural light floods into the home, helped by the high ceilings and white walls. Even so, Mr. Berton made extra allowance for the building’s long, thin footprint by including a lantern style skylight mid-way across the roof. Diffused light from this addition bounces off the walls, illuminating the central kitchen space on the upper floor and on, down the wide stairwell into the circulation space on the second floor, where the architect has carved a large central section of the floor slab away – effectively creating a bridge between the master suite and other bedrooms – to allow natural light to filter right down into the first floor “play room.” 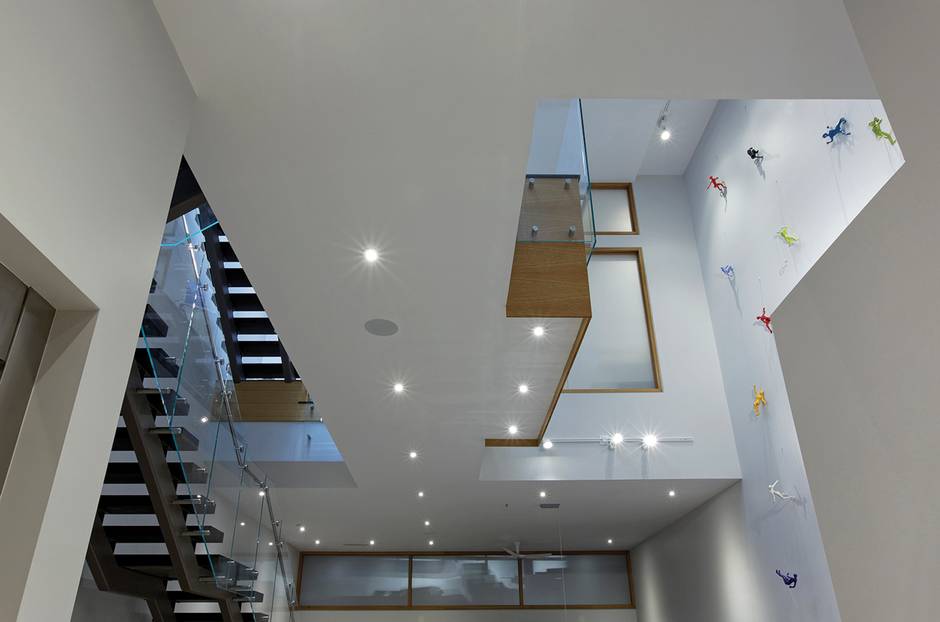 By carving out some of the second-storey floor slab, the architect created a bridge between the master suite and other bedrooms. (David Whittaker)

The effectiveness of the panels doesn’t end there. When thrown back, they provide a 16-foot wide opening, effectively doubling the lounge area in summertime. And, they provide splendid views toward the city’s financial district and CN Tower.

Mr. Berton has designed the majority of the home as a flowing, interconnected space. The master bedroom and marble-clad bathroom, for instance, are split not by a wall but with a, “dividing mass, an island if you will,” he says to explain an eight-foot high partition, into which are built a fireplace, and bathroom- and bedroom cabinets. Similarly, the powder room, located centrally within the living space on the uppermost floor, doubles as a room divider, separating the kitchen/dining area from the den and office niche at the front of the house. Pop inside to powder your nose and light floods in, this time through a glass ceiling atop this rather posh privy. 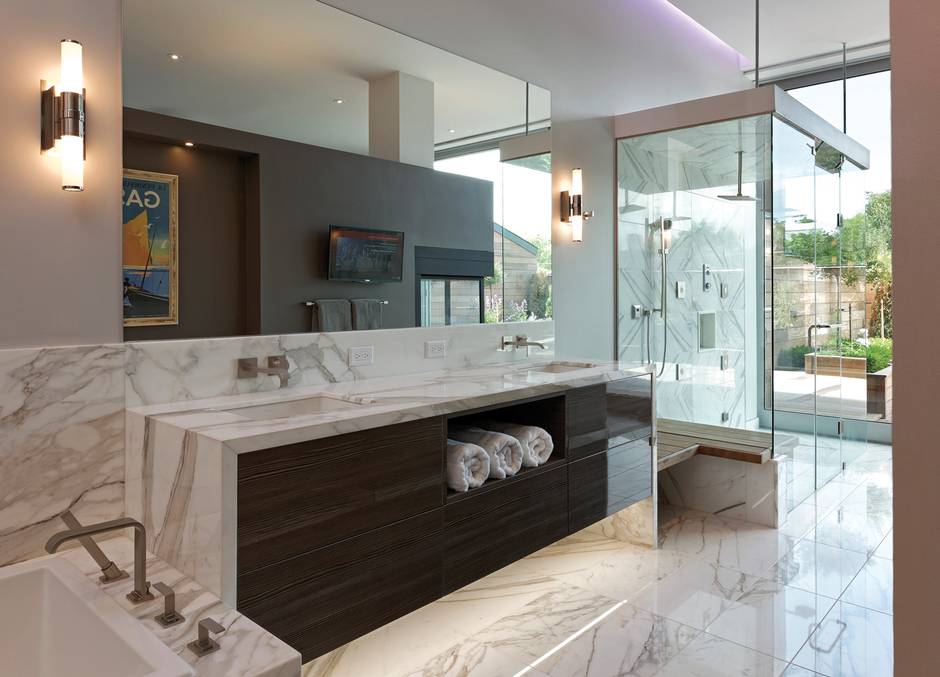 A powder room in the living space on the upper-most floor doubles as a room divider. (David Whittaker)

Wending our way down the grand staircase, each step a sturdy chunk of white oak, Mr. Berton describes the challenge of creating easy circulation in a three storey home that is as high as a conventional five storey building.

“The stairs are major elements, each flight being much higher than usual but they must be comfortable to walk up. We decided to maximize the run of each tread, thus extending the lateral space required, to lessen the steepness of the climb. This takes up more space but we feel it was really worth it. And, we added a landing part way up the largest flight from the playroom to second floor.” 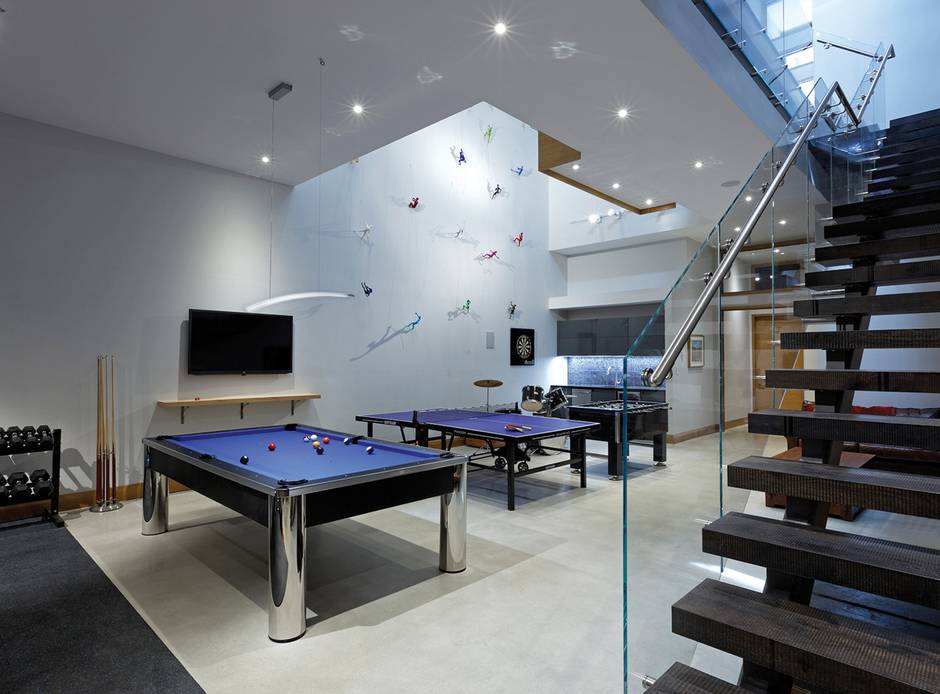 As we pause on the landing, we take in the first-floor playroom from an elevated perspective. The cavernous space is populated by big boys toys, including pool and ping pong tables but it is dominated by a 28-foot-high wall, which rises through the ceiling and on into the second floor. Sun light from high above bounces off of the wall, highlighting a playful artwork made up of a series of colourful miniature climbers, scaling the sheer white face on slender ropes.

While the synchronicity between the climbing artwork and architecture is coincidental, it is also quite apt: This very tall wall made all the more huge by tiny climbers, is perfectly set in a big townhouse, made massive and magnificent by an architect with an eye for spatial design and exciting interventions.