Andrew Coyne has resigned as editor of editorials and comments at the National Post, but will stay on as a columnist, after clashing with the newspaper's proprietors.

The well-regarded political journalist stepped down over what he calls "a professional disagreement" with senior figures at Postmedia Network Canada Corp., the company that owns the Post and numerous daily papers from Montreal to Vancouver. He had wanted to publish a column disagreeing with the Post's editorial endorsement of the Conservative Party for Monday's federal vote.

The editorial is written by the newspaper's editorial board, of which Mr. Coyne was the head, but its conclusion was dictated by Postmedia. The company's leadership believed a dissenting column from Mr. Coyne "would have confused readers and embarrassed the paper," he said in a post on Twitter.

"I don't see public disagreement as confusing. I see it as honest. Readers, in my view, are adults & understand that adults can disagree," Mr. Coyne tweeted, saying he will vote for the NDP.

But he added, "To be clear, the owners and managers of a newspaper have a perfect right to set the paper's editorial line as they wish."

Paul Godfrey, Postmedia's president and chief executive, said in an interview that Mr. Coyne's resignation "was initiated by him, not us," and that while unfortunate, "I respect that decision."

Mr. Coyne never submitted a column, and "was fully aware" that it would not run if he did, said Lou Clancy, editor-in-chief of Postmedia News.

"As far as we're concerned, if you're the editor, you support the editorial position of the newspaper," Mr. Godfrey said.

The two men last spoke "a couple of months ago," Mr. Godfrey said.

When asked whether the dispute has damaged Mr. Coyne's relationship with Postmedia, Mr. Godfrey said, "As far as I'm concerned, absolutely not. I think he's still top drawer."

Mr. Coyne did not respond to multiple requests for comment, nor did National Post editor-in-chief Anne Marie Owens or Gerry Nott, senior vice-president of the National Post.

For Mr. Coyne to be both the editorial board's head and a prominent columnist was "very unusual," said Paul Adams, an associate professor of journalism at Carleton University. "I think there may have been a mistake on both his part and the Post's in putting him in that situation," Mr. Adams said. "Something had to be done."

Mr. Godfrey acknowledged that Postmedia executives directed the chain's papers to endorse the Conservatives in separate editorials. The endorsement was discussed and approved "up here" in Postmedia's executive offices, with a few trusted senior editorial staff present, but the decision "ultimately" rests with me, Mr. Godfrey said.

"There's no doubt that I called that shot when I was at the Toronto Sun, when I was publisher. So this is not a surprise," he said.

"Since God made babies, I think [endorsement editorials] were always made that way, and if anyone thinks otherwise, I think they were dreaming in Technicolor," Mr. Godfrey added.

Last week, Margo Goodhand, the editor-in-chief of the Edmonton Journal, another Postmedia paper, said in an e-mail: "I defend the proprietor's right to express an opinion or endorse a political party in his or her newspaper. It's a tradition that dates back to the beginning of newspapers, and it is their right."

Yet, Postmedia also was criticized for wrapping many of its titles – including the Ottawa Citizen – with a front-page advertisement paid for by the Conservatives on Saturday, using the yellow colour scheme of Elections Canada polling stations.

The wraps were approved, to run two days before voting day, "very easily," Mr. Godfrey said. "Anybody, the Liberals could have done it, the NDP could have done it, as long as they pay the going rate. …Newspapers have to seek whatever revenues they can get."

The Globe also endorsed the Conservatives, but called for Prime Minister Stephen Harper to resign, in an editorial first published online last Friday. Editor-in-chief David Walmsley leads the newspaper's editorial board and decides the endorsement.

"There is no proprietorial involvement whatsoever," Mr. Walmsley said. "I, as a matter of courtesy, let the publisher know what I'm doing."

The Globe's publisher, Phillip Crawley, could overturn Mr. Walmsley's decision. "But there hasn't been [a veto] in the 18 months I've been here," Mr. Walmsley said.

Mr. Coyne joined the National Post when the paper launched in 1998, left in 2007 to work at Maclean's magazine, then returned in late 2011. He had led the Post's editorial board since December, 2014. No decision has been made on his successor.

On Twitter, he concluded: "While Postmedia's intervention was unprecedented in my experience, I could not allow the precedent to stand." 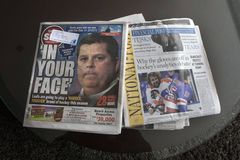 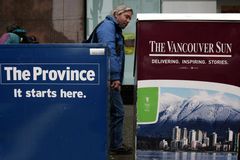 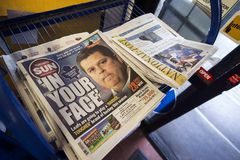 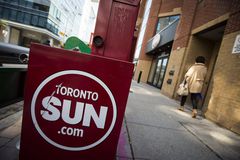