BCE Inc. is heading to court in its battle against Ottawa's strategy for attracting new wireless players, arguing that Industry Minister James Moore has no right to impose greater obligations on the company to help smaller rivals.

The legal challenge stems from a government decision in March to expand and extend obligations for incumbent carriers to provide roaming and tower-sharing to new entrants. Previously, the rules included some roaming measures to help new carriers for five years. But now the rules say those roaming provisions will continue indefinitely, and include new measures to reduce the timelines for carriers to seek arbitration when disputes arise.

BCE's Aug. 30 application for judicial review of the wireless policy comes as the Big Three carriers wage a public-relations battle against government efforts to attract new entrants to the wireless market.

While U.S. behemoth Verizon Communications Inc. has jettisoned plans to enter Canada, the domestic incumbents are still upset with a government regime they argue gives privileged treatment to new competitors.

The government has said it stands firmly behind tougher roaming and tower-sharing policies, but an application to Federal Court to reverse this will hang over the matter – meaning there's added investment risk for potential entrants while it is active.

BCE is targeting the government's March, 2013, rewrite of rules on mandatory roaming and tower-sharing, in which Ottawa toughened requirements in part by eliminating the expiration period for this obligation. Ottawa also announced that these more stringent rules would apply indefinitely to all future spectrum licences that come up for bidding, including those for the 700 megahertz auction scheduled to begin in January, 2014.

BCE says Ottawa does not have substantial justification for changing the rules of the game.

"The development of radiocommunication ... is a very expensive undertaking for companies in that it involves considerable and risky capital and technological investments. Companies cannot be expected to bid hundreds of millions of dollars for the right to acquire and use spectrum, and many more hundreds of millions of dollars to develop network infrastructure, if the conditions of its use can be subject to arbitrary, unilateral change during the term of the licence," BCE wrote in its submission.

The BCE lawsuit is the third legal action filed in a matter of weeks as telecom firms turn to the courts – and public opinion – when they can't persuade the government to alter course.

Telus Corp. previously filed two lawsuits, including one that argues Ottawa has unfairly disrupted investment plans by retroactively changing the rules governing the transfer of spectrum licences between carriers.

A spokeswoman for Mr. Moore criticized the resistance from telecom incumbents and reiterated Ottawa has no intention of changing its plans.

"It is ironic that the Big Three claim to be in favour of increased competition in our wireless market, yet are pursuing a campaign to stop the government from creating the very conditions that would create more choice for consumers," said Jessica Fletcher, director of communications for the Industry Minister.

"We will continue to strongly defend Canadian consumers and the rules for the upcoming spectrum auction, which were designed after consultations with the wireless industry, including Bell Canada Enterprises."

"The loopholes in the wireless rules remain, despite Verizon's announcement, and they need to close to ensure fair competition in Canadian wireless. This action addresses the loophole enabling foreign entrants to piggyback on the networks of Bell and other Canadian companies," said BCE spokesman Mark Langton in an e-mailed statement on Friday. "Bell's networks are funded, built and owned by Canadians and the government has no right to hand them over to major foreign entrants for their use. Doing so means such entrants won't invest in network infrastructure as Canadian companies like Bell do, especially in rural and remote locations."

BCE's chief executive officer, George Cope, has previously said the government's most problematic rules are those that enable new-entrant carriers, including large foreign telecom firms, to piggyback on incumbents' networks. Although federal rules require new-entrant carriers to pay incumbents commercially negotiated rates for that access, the companies can go to arbitration if no deal is reached.

"We'll compete head-to-head with anyone in this country in the wireless [space] because our country has the leading, leading wireless companies. But it is absolutely unfair and wrong to ask us to give our network to somebody else to use," Mr. Cope said in an interview last month. "Our network is our product."

In addition to mandatory network-access rules, the incumbents also oppose other measures that give new-entrant carriers the ability to purchase double the "prime" 700 MHz spectrum and the ability to buy spectrum from struggling startups like Wind Mobile and Mobilicity. The Big Three are prohibited from acquiring those assets until a federal ban on such deals expires next year, but Ottawa has recently stated that all future applications would be assessed on a case-by-case basis.

Separately, the federal telecom regulator is taking a closer look at roaming rates to assess their "impact on the competitiveness of the Canadian wireless industry." Last week, the Canadian Radio-television and Telecommunications Commission informed carriers that it requires them to provide additional information on both their domestic and international roaming charges.

Carriers have until Sept. 27 to provide the CRTC with a variety of details including their current roaming rates, terms and conditions for phone calls, wireless data and text messages for customer usage in Canada and the United States. Additionally, the regulator is seeking copies of all domestic roaming agreements between carriers.

"The CRTC ought to identify what the real purpose of this is because we do operate in a forborne industry," said Mirko Bibic, BCE's chief legal and regulatory officer, in a recent interview. 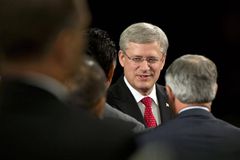 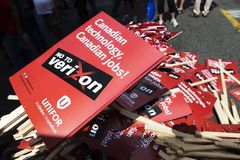