Bombardier Inc. and Boeing Co. were closing in on a deal this summer brokered by Canadian government officials before the American plane maker abruptly pulled the plug and walked away, people familiar with the matter say.

The negotiations were designed to prevent an aerospace trade battle between Canada and the United States and could have seen Boeing take an ownership stake in Bombardier's C Series aircraft. Instead, after the talks broke off, the United States imposed huge import duties on the planes and Bombardier struck a trans-Atlantic agreement with Europe's Airbus SE in a deal that will change the face of the global aerospace industry and leaves Boeing poised to seek retribution.

After weeks of high-level talks that the Canadians felt were going well, Boeing International president Marc Allen phoned Canada's Ambassador to the United States, David MacNaughton, one Saturday morning in August to say Boeing was breaking off discussions, said the people, who spoke on condition they not be identified.

While the negotiations between Boeing and Bombardier have been previously reported, new details show the extent to which talks progressed and what may have caused them to ultimately break down. However, the exact reasons for Boeing's sudden about-face remain unclear. The extent to which Ottawa and Quebec worked with Bombardier to find a solution for the C Series highlights the depth of anxiety government had about the high-tech aircraft.

The talks, which began in earnest in June, came in the wake of a trade complaint in April by Boeing against Bombardier alleging the Quebec company used unfair government subsidies to develop and sell the C Series at "absurdly low" prices in the United States and demanding duties be imposed on C Series imports.

Just a few weeks after negotiations broke off in late August, the U.S. Department of Commerce sided with Boeing and slapped duties of 300 per cent on C Series imports into the United States, effectively killing its sales potential in the world's biggest market if the decision were upheld.

In abandoning the talks, Boeing told the Canadians the market prospects for the smallest single-aisle airliners like the C Series were not as strong as advertised, according to one source. But privately, Boeing appears to have concluded that there was a good chance the U.S. Department of Commerce would punish the C Series, leading to the plane's eventual death over time as it was enveloped by uncertainty and starved for sales, another source said.

"I think Boeing felt comfortable enough that the kangaroo court of the Commerce Department would support them," said Jerry Dias, president of Unifor, which represents Bombardier workers among its 315,000 members. Said a Canadian government official: "[Boeing] thought they would have more leverage once the DOC had come down with its preliminary ruling."

That's not how the story played out.

When the Boeing talks fell apart, Bombardier picked up previously abandoned negotiations with Airbus and announced a deal Oct. 16 that will see the European plane maker take control of the C Series program. Together, the two partners say they will be able to sell thousands of C Series airliners in the years ahead, in part from opening an additional C series production site. Adding a new line to Airbus's existing assembly plant in Mobile, Ala., also resolves the duties issue by making it a domestic product, they say.

"The new deal destroys Boeing's trade case," said Richard Aboulafia of aerospace consultancy Teal Group. "Boeing has pandered to the protectionist wing of the Republic party. The epicentre of that wing is in Alabama, which loves factory jobs, even from foreign companies."

Sources say that during the negotiations between Bombardier, Boeing and the Canadian government, there were two options on the table.

The first was a joint partnership in which Boeing would take an ownership stake in the C Series. The second would see the two companies agree on a set of trade rules – including acceptable government backing – and co-operate to try to keep other rivals out of the North American market, particularly emerging competitors from Russia and China.

Bombardier and Boeing took the lead in talks but the Canadian government played a significant role trying to facilitate an agreement, sources said. Mr. MacNaughton and his staff at the Canadian embassy were involved, as were officials from Canada's foreign and international trade ministries. Boeing's top executives, including Mr. Allen and chairman and chief executive Dennis Muilenburg, also took part. Wilbur Ross, the U.S. Commerce Secretary, was informed of the discussions and did not openly object to them but the U.S. government was not at the table.

Things seemed to be going well, said one person with knowledge of the talks. Boeing told the Canadians they were interested in a deal and Canada's proposals were constructive.

But everything came to a sudden end when Mr. Allen told Mr. MacNaughton he'd have an answer on Canada's latest proposal by the end of one week in August. He e-mailed Mr. MacNaughton Friday requesting a meeting Saturday, according to sources. The ambassador was not available in person so the two connected by phone. Mr. Allen told the ambassador that Boeing would not be presenting a counter-offer and broke off negotiations.

There are several potential reasons why Boeing walked away from negotiations, according to J.P. Morgan analyst Seth Seifman. Among them is the fact that taking over the C Series is not consistent with Boeing's longer-term strategy, he said. Mr. Seifman said he believes Boeing plans to develop a new middle-market plane for 2025 that establishes a production system that will feed a new small aircraft for five years later to replace the 737.

"In this light, the C Series might have seemed like a distraction" in exchange for a marginal return, Mr. Seifman said. He estimates the C Series could have generated $300-million (U.S.) of earnings before interest and taxes (EBIT) for the American plane maker by the time it ramps up in 2020, a 3 per cent contribution to Boeing's expected $10-billion commercial aircraft EBIT that year.

With files from Greg Keenan and Daniel Leblanc 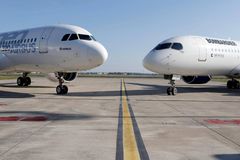 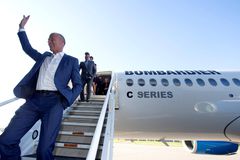