Bombardier Inc.'s partnership with the Quebec government failed to allay investor concerns over the company's ability to correct the flight path of its troubled C Series program.

The widely traded class B shares in the company fell more than 17 per cent Thursday, to $1.33, on the Toronto Stock Exchange after the Montreal-based aerospace and rail equipment manufacturer unveiled a $1-billion (U.S.) partnership with the Quebec government that will inject much-needed cash into the new C Series jetliner, which is more than two years late and billions of dollars over budget.

Analysts and experts are questioning the move to get help from the government and asking whether it represents a kind of Hail Mary pass by president and chief executive Alain Bellemare after talks with other industry players – including giant rival Airbus Group SE – failed.

"I didn't think there could be anything worse than Bombardier partnering with Airbus, but I guess I was wrong," said Richard Aboulafia, vice-president of analysis with Virginia-based Teal Group.

"A heavily government jetliner is comical. This is the sort of thing you find in emerging economies trying to find out the basics of a new technology or market."

Under terms of the partnership, Quebec will get a 49.5-per-cent stake in the C Series program. The province can also exercise warrants to buy up to 200 million class B shares in the company at a price equivalent to $2.21 (Canadian), for a potential stake of about 9 per cent.

For its part, Bombardier commits to maintaining the C Series operations in Quebec for at least 20 years.

"What is riskier, doing it [investing] or not doing it?" he asked reporters, referring to the possibility of losing thousands of well-paying, highly skilled Bombardier jobs in Quebec if the company faced a major crisis.

The incoming federal Liberal government said it will decide on an outstanding request for federal assistance from Bombardier after it takes power next week.

Sources say the Caisse de dépôt et placement du Québec was approached to participate in a Bombardier investment or asset sale and could still decide to do so at some point in the future. Asked about the Caisse's involvement, Premier Philippe Couillard told the legislature Thursday that he believes numerous institutional investors will become interested in the company in the near future and that the Caisse will make a decision independently of what the government has done.

"In our view, this partnership and liquidity injection from the Quebec government helps but does not fully resolve the liquidity issue and the high financial leverage burden," BMO Nesbitt Burns analyst Fadi Chamoun said in a research note Thursday.

"We believe that the company still needs to sell assets to fund capital requirements over the next two years and deliver a credible strategy to improve the profitability of the Business Aircraft and Transportation divisions."

Meanwhile, Bombardier on Thursday posted a $4.9-billion (U.S.) loss for the third quarter ended Sept. 30, with operating results substantially below expectations – which were already low. Items include a $3.2-billion writedown of the C Series program and a $1.2-billion charge related to the discontinuation of the Learjet 85 light business jet.

Mr. Bellemare played down concerns about the company's future.

He was responding to questions from one analyst about how the company reached the point where it has booked a quarterly loss almost twice as high as its market capitalization and how investor confidence can be maintained, given the lack of change at the board level.

The dual-class share structure, which gives the founding Bombardier-Beaudoin family 54-per-cent control over voting rights through a special class of super-voting shares, remains in place and has been criticized in some quarters for entrenching board members and senior management.

Mr. Bellemare said the board has been highly supportive of his turnaround efforts since he took over as CEO from family member Pierre Beaudoin about eight months ago.

The company simply had too many balls in the air, he said.

"The organization was overwhelmed by the number of [aircraft development] programs," he said. "We had multiple programs running in parallel and that was very challenging for an organization of our size."

With reports from Nicolas Van Praet, Steven Chase and The Canadian Press

Opinion
Bombardier patriarch Beaudoin seeks a landing he can walk away from
October 23, 2015 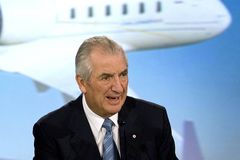 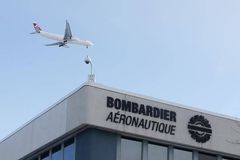 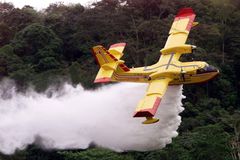 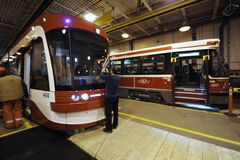 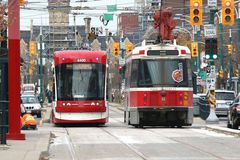