Canada Post is promising relief for Canadian retailers who say the postal service is unfairly subsidizing their Chinese competitors.

The federal Crown corporation says it has been forced to provide discounts on certain types of mail from China under a long-standing international arrangement, but it has recently negotiated price hikes that will start next year.

The change is welcome news to Canadian-based retailers, who have questioned why they pay much higher costs to mail products to Canadian customers than companies based in China.

International mail rates are set by a United Nations agency called the Universal Postal Union, which sets prices based on factors such as national income. The cost of sending mail from China to Canada was set at a low amount years ago, long before the advent of e-commerce and China's emergence as a major economic force.

The rapid shift toward online shopping is raising a wide range of policy issues for governments around the world, affecting decisions on shipping rates, duty-free limits and how to collect sales taxes. Some of these issues are currently being discussed in the context of the renegotiation of the North American free-trade agreement.

Members of Parliament currently studying e-commerce issues expressed surprise this week when a Canada Post executive outlined the Chinese mail situation for them at the House of Commons trade committee.

"I think the most important thing is we're not providing these [lower rates] willingly," Rod Hart, Canada Post's vice-president of parcels, told the House of Commons International Trade committee this week. "They're established rates within the Universal Postal Union and these rates were intended to be used more for letter-type services. We also desperately want to see that changed as well, and we're very active on that front."

The issue is the rate charged on small mail items called untracked packets, which are not traceable during the shipment. Canadian customers who opt for that shipping option when shopping online can get a cheaper price, but often have to wait weeks for the item to arrive. A slightly more expensive option that includes tracking and allows for much shorter delivery times has recently surpassed the cheaper option in terms of volume from China to Canada.

A Canada Post spokesperson said Wednesday that new rates, which are based on weight, will take effect in 2018 and will increase until 2021. At that point, the rate on untracked packets will have increased by up to 100 per cent.

The current discounts on Chinese mail shipments is a deep source of frustration for Canadian retailers like Olivier Mullié, who sells smartphone accessories online at blueshop.ca and is the owner of Tibo Distribution Inc., in St. Hubert, Que. He said Canada Post, a federal Crown corporation, is effectively subsidizing his competition.

"Canada Post has to make up for these subsidies, so to speak, by charging us more," he said. "I just want a level playing field. If we have to pay X amount, then obviously, internationally, they should pay the same amount, if not more. And not the other way around. That doesn't make sense."

Mr. Mullié also referenced a study that found Canadian border officials are not imposing taxes and duties as thoroughly on foreign mail shipments when compared with courier parcels. He said policy makers need to take a closer look at the e-commerce sector and how Canadian firms can remain competitive.

Liberal MP Mark Eyking, who chairs the Commons trade committee, said he and his colleagues will issue a report on e-commerce issues. They are also planning a related study on Canada's de minimis – or duty free – threshold. That limit is currently set at $20, but U.S.-based online retailers like eBay are urging Canada to match the American limit of $800 and want the change included as part of NAFTA discussions. Some Canadian retailers warn such a move would hurt Canadian firms and undermine the tax base.

Mr. Eyking said it is clear to him that Canadian legislation needs to be updated to reflect the rise of online commerce.

Mr. Eyking said he was surprised by Canada Post's challenges with Chinese mail shipments and said there should be a level playing field.

"There's a sweetheart deal with these companies bringing in parcels," he said. "You wouldn't want the rest of the shippers, Canadian companies, subsidizing this ... It's a real eye-opener."

Conservative MP Dean Allison, a vice-chair of the committee, said he was glad to hear that Canada Post is working to raise prices on goods mailed from China.

"It's not right," he said. "There's not a chance on Earth that we could ever send something to China for a dollar, or whatever the case may be." 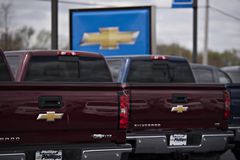