Craig MacTavish is a unique figure in hockey.

Not because of the numerous titles he's had (four-time Stanley Cup winner, broadcaster for TSN, coach, front-office employee, coach again). No, Mr. MacTavish is the lone general manager of a Canadian NHL franchise who has an MBA.

After retiring from the game as a player in 1997, he was accepted to the University of Alberta in Edmonton and the University of Western Ontario in his birthplace of London, Ont. But he declined those offers when the New York Rangers asked him to join its organization as a coach.

Mr. MacTavish later connected with Queen's University when he was finally ready to go back to school, and he completed his MBA from the Kingston-based school in 2011.

Within a few years, Mr. MacTavish might not be alone in having an MBA and being involved in hockey. Athabasca University, in concert with the Business of Hockey Institute, to which Mr. MacTavish is an adviser, will offer an MBA in hockey starting in May.

The hockey-specific program is made up of six courses that are added to the existing executive MBA curriculum. Students who already have an MBA from another school can get what the St. Albert, Alta.-based BHI is calling a "professional hockey manager" designation by taking just the six hockey courses.

Mr. MacTavish, who's been the Edmonton Oilers' GM since April of 2013, says someone with this degree would make a strong candidate for a job in the NHL in the future.

"You constantly get queries from people that want to get into the business because it's a dynamic field to be in, and it's exciting," Mr. MacTavish explains. "This is an opportunity for hockey people, and people who have a passion for hockey, to really differentiate themselves."

Announced in January, the online program was positioned as an elite hockey-specific MBA to help "elevate the business side of the game." Registration for the program, which is expected to attract about 30 students and have a total cost of about $79,000, began Feb. 1. The first cohort is expected to graduate in late 2017 or early 2018.

"Hockey competes for people's time and money, and enough wasn't being done for the long-term sustainability of the game," says Chris McLeod, the director of marketing and communications at Athabasca, on online university. "There's a lot that gets put in to developing the talent side, but nothing really is done to enhance business and operations."

The program, which comes along at a time when the NHL has grown into a $3.7-billion (U.S.) a year business, is the brainchild of NHL player agent Ritch Winter and Calgary Flames president of hockey operations Brian Burke. Mr. Winter says it is focused on helping drive the bottom line for hockey, but is also part of a wider trend of MBA-level programs that are much more industry specific.

"We're seeing a greater degree of specialization in almost every business. The technology and the businesses people work with have become more complicated," Mr. Winter says. "A hockey team used to be just a hockey team, now it's got digital offerings, advertising, and different game-day preparations. Without understanding each part of a business specifically, and without getting more specific academically, you're not going to get the best graduates for the business they plan to enter."

Mr. Winter spoke to Mr. Burke about his idea a few years ago, and after a couple of false starts with other schools, they landed on Athabasca.

"Athabasca has the platform – we've had an executive MBA for a number of years, but we made it clear we weren't experts in hockey," says Michael Mauws, Athabasca board of governors member and professor of business policy and strategy. "The intention all along has been to deliver the program with world-leading academics, combined with leading people from the industry."

"You'd be surprised who has called to see if they can be academics in this program," continues Mr. Winter. "We forget that some very talented people are hockey people."

The long-time agent says the idea for the program came to him when he was thinking, somewhat philosophically, about the salary cap on NHL team payrolls, and how he could use it to the benefit of his multimillion-dollar clients.

"In life, we all think about our circumstances and how we can improve them. I thought that the really interesting thing about the salary cap is that we can actually force the owners to pay our clients more money," he says. "The game has improved so dramatically on the ice, and we're in such a competitive environment, entertainment-wise, that isn't it foundational to provide a training ground for executives to drive the business?"

Borrowing hockey vernacular, Mr. Winter says the program will become the source of "first-round picks" for the executive suite of NHL franchises.

"If we can bring in 20, 30, or 50 more talented people into the industry and generate more money, and strangely enough, force the owners to give our players half of that, the program seemed like a logical idea."

According to Dr. Mauws, the Hockey MBA is aimed at giving its graduates an opportunity to take their career to the next level, within the industry they're already working in.

"Ritch and Brian wanted to see the game get shaken up," says Dr. Mauws. "They wanted to improve the way the game was being run, and ensure hockey has a long-term future in the face of all the other entertainment options that are available. They really want the very best students coming to the program."

Mr. MacTavish, who oversees a player payroll of $66-million for an organization that Forbes magazine values at $475-million, knows the benefit of an MBA in an NHL front office, and why a program like Athabasca's could be beneficial for soon-to-retire NHL veterans who want to stay in the game on the business side.

"The difficult thing is that you're 35 and you should be going through a stage of your life where there should be a lot of stability. You should be settled in to a career, with a home and a family. But at 35, or even less than that, you're faced with a massive career change," he explains. "The people who handled it well were the people that got some other training."

The skills he acquired while completing his MBA have helped him adjust to hockey's new era, one focused on big money and, increasingly, data analytics. He explains that he has a "whole lot more familiarity with what they [the scouts] are talking about now."

Even though many view hockey as a fun activity, Mr. Winter explains students will not be able to take any part of the degree lightly.

"This is a rigorous MBA program for seasoned executives," he says. "It is no easier than the training that the likes of Sidney Crosby or Steven Stamkos engage in off the ice – it's a chance to train, push and develop people like nothing we've seen before."

Mr. MacTavish knows first-hand the difficulty of an MBA, and appreciates what grads can bring to any business situation.

"When I see someone has an MBA, I instantly know they're very driven, and they're able to see things though and solve complex problems. They're go-getters. Everyone in my class was a go-getter," he says. "They had families, they had jobs, and they were taking this thing [MBA] on. I have a great appreciation of anyone who has the initiative who takes this program."

So while Mr. MacTavish's Oilers now look toward the end of this season and the next player draft, it may be just one of a number of NHL teams that might be looking toward the classroom – as well as the rink – for the next top prospect. 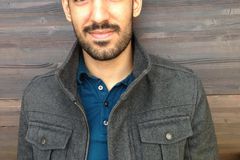 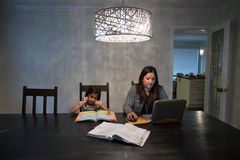 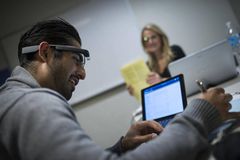