Anthony Harbour decided a few years ago he wanted to pursue an MBA, but he wasn’t about to apply to just any school.

As an African-American from Los Angeles, Mr. Harbour was looking for a university where diversity – of thought, gender, age, sexuality and ethnicity – was as fundamental to the student experience as the classroom instruction.

It’s what he liked about the Rotman School of Management at the University of Toronto, where he enrolled in the MBA program in 2014. Though the makeup of business schools continues to be predominantly white and male, Mr. Harbour said he immediately felt at home among a student body where nearly 70 per cent of the people come from outside Canada, and where his race wasn’t a main topic of discussion.

“Honestly, they respond to my American-ness more than anything else,” Mr. Harbour said of his fellow classmates in the program.

If there was one surprise, it was that it took until 2015 for Rotman to put formal structures in place to support students, like him, who identify as LGBT – lesbian, gay, bisexual or transgender.

Earlier this year Rotman became the first Canadian business school to formally partner with the U.S.-based LGBT advocacy group Reaching Out MBA (ROMBA). As part of its commitment to the organization’s mandate, Rotman has created two new fellowships for standout LGBT spokespeople and potential leaders.

Simultaneously, Mr. Harbour, who identifies as gay, successfully led the effort to establish an on-campus club for Rotman’s LGBT students and their friends and allies. The Letters was formally incorporated this spring, and now boasts a membership of about 70 students, of which more than half are heterosexual.

“That’s important because one of the big things that we really want to offer is, literally, just mere awareness. A lot of people don’t understand what LGBT means outside North America. It’s a very Western idea, so if you are from China, or India or Peru, that [acronym] doesn’t resonate with them. So it’s a matter of educating people what LGBT stands for and what it means. 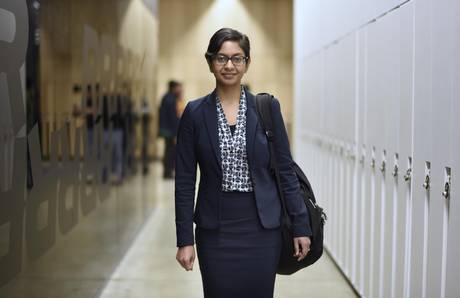 In September, Aqeela Nanji, 27, enrolled in the U of T’s Rotman School of Management after she was awarded one of two new fellowships from the U.S.-based LGBT advocacy group Reaching Out MBA. (Fred Lum/The Globe and Mail)

The recent moves by Rotman follow those of the Harvard Business School, Yale School of Management and Purdue and Georgetown universities, which have joined ROMBA as they look to broaden LGBT representation in MBA programs – and break down stereotypes of what a business leader looks like in the process.

LGBT students make up about 3 per cent of the average U.S. business-school population, said ROMBA executive director Matt Kidd. But he said the number of people who feel comfortable being open about their sexuality shrinks dramatically once they graduate and enter the corporate world.

According to ROMBA, as many as 50 to 80 per cent of LGBT individuals who are out at business school go back in the closet once they start working, either because they don’t feel comfortable or are worried their careers will be sidelined, especially if they hope to make it to the C-Suite.

Mr. Kidd said many LGBT business graduates have progressed to middle and even senior levels of management, but, beyond that level, “it’s pretty bleak.”

“If you look at the Fortune 500 companies, there is one [openly gay leader] that I can think of and that is [Apple Inc. chief executive officer] Tim Cook,” he said.

"A lot of people don’t understand what LGBT means outside North America. It’s a very Western idea, so if you are from China, or India or Peru, that [acronym] doesn’t resonate with them. So it’s a matter of educating people what LGBT stands for and what it means."
Anthony Harbour, who enrolled in the Rotman School of Management's MBA program in 2014

Mr. Kidd said ROMBA’s goal is to inspire LGBT students to push against those boundaries and make it easier and more welcoming for others to succeed in the business world.

It’s not just the students themselves, or even the LGBT community, that stands to benefit from this effort, said Sarah Kaplan, a professor of strategic management at Rotman.

Studies indicate that companies stand to reap benefits from encouraging diversity within their ranks – everything from greater innovation and creative thinking to increased profitability and stronger client relations.

“The more diverse the team, whether that’s from international representation, gender or race, the more likely it is to challenge the status quo,” said Dr. Kaplan.

Those same rules also apply to business schools, she said – maybe even more so. “It’s our responsibility to help students understand and be comfortable with all the different forms of diversity. We want to value everyone, and encourage our students to become better global citizens,” she said.

The school’s efforts appear to be working. In September, Aqeela Nanji, 27, enrolled in Rotman after she was awarded one of the two new ROMBA fellowships. It’s an honour she does not take lightly, noting, as an LGBT woman of colour, that she was initially hesitant to pursue a business career.

“It never crossed my mind to not be ‘out’ in the workplace, but I worried that I would encounter sexism, homophobia and racism,” she said in an e-mail.

It was only after learning about Rotman’s involvement with ROMBA, and speaking with “out” professionals, that she felt confident to join the program. She is now an active member of the organization, and also sits on the executive of The Letters.

Ms. Nanji views the fellowship as a sign of the school’s faith in her “as a future business leader who advocates for social change.”

But it also serves a greater purpose. “It shows that the school is making an effort to welcome LGBT students and create an inclusive environment,” she said.