"Does this speech make my butt look fat?"

A new book, The Well-Spoken Woman: Your Guide to Looking and Sounding Your Best, starts with that line and, after my initial laugh, I realized it really struck a chord. What woman can't relate to worrying about something completely absurd while standing in front of a group of people?

I used to worry about a button on my blouse coming undone while speaking, which is why I never wear blouses. Jennifer Morozowich, who runs INideas, a Toronto-based company that offers strategic planning for advertising agencies, says she never eats before public events, thanks to an incident early in her career in which a bit of food was stuck in her teeth during a televised event. For others, the inevitable blush that streaks across the face can hinder professional aspirations.

If you find yourself sitting silently in your seat during important meetings, however, your opportunity for advancement may sneak out the back door.

In The Well-Spoken Woman, author Christine Jahnke, a Washington, D.C.-based speech coach who has worked with U.S. Secretary of State Hillary Clinton, Michelle Obama and many corporate CEOs, offers tips and examples for women trying to overcome their fear. The author draws on her own experiences and her observations of female politicians and businesswomen, such as former Texas governor Ann Richards and PepsiCo Inc. CEO Indra Nooyi.

The first is a signature style, which includes appearance and body language in addition to voice.

The second characteristic is a synchronized message: what is said aligns with what the audience wants to hear. In a business setting, she said, this involves answering the following questions: why are we having this meeting, what are we trying to accomplish, and how you talk about it so that your message has relevance in their lives.

The third piece of what Ms. Jahnke calls the "power persona trifecta" comes down to self-assurance and the ability to handle any obstacle. That could mean being prepared when your PowerPoint presentation goes awry or your computer crashes. "True professionals who have a Plan B in their back pocket ... can handle those types of things without skipping a beat."

The book's suggestions apply to men and women alike, but she singles out women because of their relative lack of representation in business and government. Women also face other obstacles when assuming a more public role. Everything from their appearance to their boldness can backfire on them.

"Study after study shows that even when you control for other variables, both men and women react more negatively to women who speak up in meetings, than they do to men," said Denise Graveline, a public-speaking coach based in Washington, D.C., and author of the Eloquent Woman blog.

"Because men speak up more in the workplace, they're more likely to have opportunities to promote themselves and their accomplishments, which can lead to better raises and positions," she added.

Carey-Ann Oestreicher runs a Toronto-based career development firm. She coached one woman who was worried about making a presentation to a company board, and who discovered that her fear of bringing attention to herself was holding back not only her career, but also her life outside work.

Another obstacle facing women comes down to the likeability factor. It used to be the case that women needed to exude enough toughness and confidence to show they could get the job done. Yet a recent study by the Massachusetts-based Barbara Lee Family Foundation, which focuses on women's representation in U.S. politics, found that likeability is the most important factor in whether a woman wins an election.

Ms. Jahnke said women in the workplace have to walk a fine line: "It's all about that tightrope – show that you are confident, show that you are a leader, but at the same time, you don't want to be viewed as overbearing:"

It's important to recognize and learn to overcome this double bind, because career advancement depends upon on it.

"Public speaking, and speaking well in general, is critically important to all C-level executives, not only women," said executive recruiter Patricia Lenkov, a former Montrealer now based in New York. "I often advise women who want to sit on their first corporate board to become better known in their field and become more visible in general. One way to accomplish this is through public speaking at, for example, conferences," she added.

An easier segue into public speaking can occur in your social setting, such as delivering the toast at an anniversary party, Ms. Jahnke said.

Most of all, she advises women to overcome the so-called imposter syndrome, that phenomenon of self-doubt. Women need to learn to stop turning down opportunities because they don't think they know enough, she said, because men don't hesitate.

Like it or not, maternity leave hurts your career
October 14, 2011 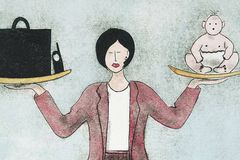 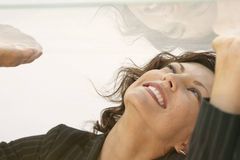