Jim Shepard has one of Canadian business's most unforgiving jobs: turn around Canfor Corp., the B.C. lumber giant battered by the U.S. housing collapse and a host of economic forces. If anyone can cope with adversity, it is the 71-year-old Mr. Shepard, whose mother died when he was young, leaving him in the care of an alcoholic father. Fifty-five years later, the resilient Mr. Shepard, now Canfor's CEO, may prevail once more. Canfor is benefiting from the sharp reduction in lumber supply and a surging market in China. But he admits he is not out of the woods yet.

Is this your toughest leadership challenge?

Absolutely. My time as CEO of Finning [a Caterpillar equipment dealer]was kind of a training ground for going into this battle.

You were 68 when you took this job. Why would anyone come out of retirement to do this?

I don't think anybody knew how bad it was going to get. When I first arrived at Canfor three and 1/2 years ago, the thing that concerned me most was I just didn't get a sense of urgency. The first thing I had to do was instill that urgency and do it quickly, and put together a team.

Within a matter of days I gave myself a 25-per-cent pay cut, put the jet up for sale and announced the closing of some offices that were extraneous to the business. I had to get things going fast.

As I got into it, I appreciated this company is very unique, very special. The people are tremendous - they have really hunkered down and delivered. I was riding along B.C.'s Upper Levels Highway a few months ago and outside this church was a sign: "Squander your life on something worthwhile," and I thought, "That's it. I'm squandering my retirement on Canfor."

How much longer will you do this?

I am off with my fiancée on a bike tour, and in August, we are getting married. [Mr. Shepard is a widower.]That means I will have a lovely lady and a wonderful step-daughter moving into the household. With two more mouths to feed, retirement isn't immediate, by any means. And I've got a marathon to run in November so I'm not planning to get into the rocking chair just yet.

Does the running provide the stamina to manage a company at 71?

Back in the beginning, Jim Pattison [the largest Canfor shareholder]asked me if I'd be interested in a short-term project. I found it was to come in as his interim CEO of Canfor. I took a week to figure out if I really wanted to give up retirement and get into something like that. I discussed it with my two boys and made up my mind. When I phoned my older son to say I'd take it on, he said, "Yeah, I knew that. Dad, you're nothing but an action junkie."

Aren't you also co-author of a children's book?

It's called the Adventures of Commander Didlittle and the Lost Battalion. I had it pretty much all written by the time I got to Canfor. It was the crazy idea of my two oldest grandchildren and I tied it all together. It's 168 pages, self-published and a real book, for 8- to 10-year-old boys.

It's the story of a guy who is quite bright but not quite as bright as he thinks he is. He's got this over-inflated confidence and doesn't read his orders fully. He gets sent out on these missions where he is parachuted into the jungles of Africa but he is equipped for the Arctic. He didn't read his instructions properly.

Is it really about you?

In all fairness, I get a feeling like it's kind of a parody on me. The guy is quite comical, truthfully. I would sit around telling stories to the boys when they were six and seven and we developed this Commander Didlittle character. After a while, I couldn't remember all the stories I had told. So my daughter-in-law said, "You are going to have to write these down." One of the boys said, "Grandpa, let's write a book." Now, we're going to focus on the Christmas buying season.

So you were homeless as a boy, and now you're giving this book to today's boys?

I was only homeless when I was 15 or 16, the last couple or three years of high school. For a long time, I never really thought of myself as homeless, but, in truth, I didn't really have a home. My father used to bounce in and out of beer parlours and construction camps and my brother and I would bounce in and out of rooming houses, staying there for a week at most, other times for a couple of days. It was not a lot of fun.

Not the classic CEO upbringing.

No, but it's kind of interesting. My two grandsons are in a private school and I remember one night over dinner, my daughter-in-law said: "Mr. S., you've had a great career, but just imagine if you had the upbringing your grandchildren have, with all this encouragement and opportunity. You would have probably gone a lot further."

And I said, "No, I'd probably not gone as far." My blessing was my upbringing, I never knew exactly where I was going - I just knew I was going away from where I was, as fast and as far as I could get.

My father, Frank, played for Detroit in the 1920s and then he played quite a few years for Tulsa Oilers [American Hockey Association] In 1927, they struck oil in Oklahoma and the new team owner wanted a championship team so he brought my father down from Detroit. He was given a car as player of the year for the team. He was pretty good.

Did he find it hard after hockey?

I felt awfully guilty about my father's drinking, but over the years I came to realize it happens to a lot of guys who come out of hockey. He had a Grade Three education and while he was playing hockey, he was moving around a lot. When the hockey stops, it's a different world.

Does it motivate you that, having known poverty, you have people's livelihoods in your hands now?

I take that responsibility very seriously. I just finished doing interviews with top management to stay in touch and make sure my feet are on the ground. I get feedback on the company's management style, and to make sure it really is a fun place to work - as much fun as there can be in this kind of market.

The fun of management is where you are given leeway and opportunity to make mistakes and learn, and then to really achieve whatever goals are agreed to. I try to create a climate where people feel they are empowered and appreciated. I think that's all I can do.

What's the story with your once-shuttered mill in Quesnel, B.C.?

We've been very aggressive in China. The market potential is immense. We managed to secure a market for a product out of Quesnel, cutting it at metric widths, thicknesses and lengths. It will be un-planed, but it's lumber. There is an appetite for that kind of a product in China. That enabled us to start Quesnel back up, and that product is pretty much sold out for the first six months.

What are the wider benefits?

A lot of that product we used to ship to the United States. None of that production is going to the U.S. now, and now that volume is taken off the North American market for the foreseeable future.

So it is a good thing. The recent lumber recovery wasn't because of demand, but because of the shrinkage of supply with sawmills going down and cutting back, and people like ourselves redirecting our product.

When I started at Canfor three years ago, 82 per cent of our product went to U.S.; in December, we were down below 60 per cent. We've been moving deliberately to have less dependence on the US., and it takes pressure off the market.

What do you think of Chinese wood-processing?

I've been to China four times in the last couple of years and I've gone through a couple of dozen plants. I was expecting this is where we would send our low-grade lumber - for dicing, slicing and remanufacturing into high-quality table tops.

So I expected the first plant to be dirty and dark, but it was well-lit and tidy and had a good natural flow of production. Gee whiz, I thought, there is some decent plant engineering here. And the product out of those plants is of excellent quality.

It's not the North American image of China.

The North American stereotype is that they are just over there torturing their workers, and paying a pittance for raw materials and turning out low-quality product. If you want to believe that, you can. But if you do and you're in manufacturing, you are going to be history because that ain't the reality.

What you lose sleep over?

As long as I'm running, I can sleep soundly. But my major concern isn't just the lumber business - it's the global economy. I'm just hopeful we are going to have sensible leadership of all economies out there. It worries me about leadership in the U.S. right now and the direction it is going. You know, we lived through socialism in B.C. for 10 years. I know what it looks like and it is not pretty.

After university. worked as an engineer for Procter & Gamble and energy-technology giant Babcock & Wilcox. 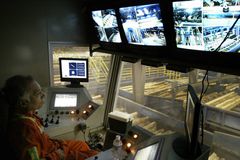 Recession goes on for forestry, industry says
August 1, 2009
Shiver me timbers: Forestry executives are jittery over NDP's plans
May 7, 2009
B.C.'s forest sector
July 15, 2010
Follow us on Twitter @globeandmail Opens in a new window
Report an error Editorial code of conduct