Most corporate offices have a first-aid kit somewhere, stocked with Band-Aids. Most also have policies readily in place allowing time off for physical ailments and will spring for ergonomic seats or standing desks for people in physical discomfort.

But where's the first-aid kit for mental health emergencies? And what would that even look like?

Lisa Couperthwaite, a clinical psychologist at Toronto's Centre for Addiction and Mental Health, noted that a kit in this sense consists of training for employees in how to help someone experiencing a mental health issue. We, in effect, are the Band-Aids.

"With mental health first aid, it's much more about the interpersonal interaction between people and the informal support that our colleagues provide," she said, speaking at a panel discussion on mental health issues in the workplace sponsored by The University of New Brunswick. The panel was part of The Globe and Mail's Human Resources summit: Solving Workplace Challenges in the Modern Economy held June 21. The summit also hosted the presentation of the 2017 Employee Recommended Workplace Awards, which recognizes companies that put the health and wellness of their employees first, which was co-created by The Globe and human resources consulting firm Morneau Shepell.

"A lot of the interventions that we use to respond to people who are having a mental health issue are the same things that we can use to build resiliency and build collaboration. [They] really can help the bottom line for the organization," she said.

"It's not just good for the person with the mental health issue. It's good for the entire culture, organization and competitiveness, performance, all of that," she added.

For instance, a mental health incident can arise during an intensely stressful moment at work. It's an everyday occupational mental hazard in any office and, in fact, often adds purpose and meaning to work. Yet, people may respond very differently to stress.

"There's a threat response," Dr. Couperthwaite said. "There's also a challenge response where people really rise to the challenge, and they are at their best in terms of performance. There's also tend-and-befriend responses, reaching out to one another and being supportive and creative in that culture.

"Then there's also the blah," she says, imagining an employee who has a deflated response to stress. "Those are the employees we really need to worry about."

This can make a first-aid response more nuanced, since someone experiencing severe problems may not be showing overt signs, but become withdrawn. That's where training can perhaps help colleagues to recognize this in others and offer support, Dr. Couperthwaite indicated.

The aim, in the end, is to make supporting mental health issues as normal as physical ones. To try to help that, Louise Bradley, president and chief executive officer of the Mental Health Commission of Canada, noted the psychological safety standard released by her organization in collaboration with the Canadian Standards Association.

It is like the occupational health and safety standard, but for psychological issues. In addition to providing voluntary guidelines and resources for companies, it notes training programs such as Mental Health First Aid. (All of which can be found on the Mental Health Commission of Canada's website.)

"This is something that is really concrete and is available to small, medium and large businesses and organizations," she said. In fact, the standard has been downloaded in 15 different countries, she noted. "The magnitude and response have been far greater than any of us ever thought."

However, panelist Bill Howett, chief research and development officer of work force productivity at Morneau Shepell, added that one of the biggest barriers in all of this is people not even knowing that they have a mental health issue.

Opening up a dialogue in the workplace can help identify problems, not in terms of self diagnosis, but in how individuals respond to difficult circumstances.

For companies, "a mental-health strategy doesn't mean a policy, some training, an EAP [employee assistance program] and checking the box." It's about integrating mental health into the company's human resources strategy, making the process more "organic," he added.

This isn't to say that mental health policies in the workplace somehow abrogate an employee's responsibilities for their own health, he insisted. Instead, it opens up the conversation. It better addresses how to handle change and potential problems, before they occur.

Although the first year of the award has come to a close, organizations can register now for the second year of the Employee Recommended Workplace Award by going to the award website at employeerecommended.com 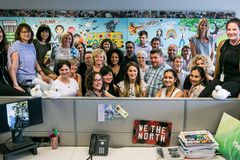 Sensitivity grows for workplace mental illness
June 21, 2017
Employee Recommended Workplace Award finalists announced
May 16, 2017
Why you need a mental health leader
June 21, 2017
Follow Guy Dixon on Twitter @Guy_Dixon
Report an error Editorial code of conduct
Due to technical reasons, we have temporarily removed commenting from our articles. We hope to have this fixed soon. Thank you for your patience. If you are looking to give feedback on our new site, please send it along to feedback@globeandmail.com. If you want to write a letter to the editor, please forward to letters@globeandmail.com.
Comments