Canada's trade pact with Europe has become the little deal that could.

Against significant odds, the Comprehensive Economic and Trade Agreement (CETA) passed its last major hurdle Wednesday – approval by the European Parliament in Strasbourg. Phase-in of the vast majority of the deal's benefits, including elimination of 99 per cent of tariffs on goods, is expected to begin within weeks.

Passage comes as the promise of freer trade is under threat amid rising protectionism, in the United States and elsewhere. Since CETA was negotiated, Britain has voted to leave the European Union, Donald Trump has moved to pull the United States out of the massive 12-country Trans-Pacific Partnership and talks on a U.S.-European free-trade deal have fallen dormant.

CETA is about much more than just tariffs on cars, farm products and other goods. It also creates common rules covering a broader swath of trade activity, including services, government contracting, intellectual property and resolving disputes.

What's next for CETA?

Canada's Senate must still ratify the deal, following approval by the House of Commons this week. Passage is a virtual certainty. The provinces must also bring some of their own laws and regulations into compliance, including allowing European companies to bid on some government contracts.

The 28 EU member states, including Britain, must also approve sections of the agreement that stray into areas of national control. But the vast majority of the deal's benefits will come into effect as soon as Canada completes ratification. Until Britain formally leaves the EU, it will be bound by CETA.

The future of one section of the deal remains in doubt: the rules that allow investors to directly sue Ottawa and the EU for compensation for government decisions that impair the value of their investments. (But legitimate claims are much more narrowly defined than in the North American free-trade agreement. For example, companies can't challenge legitimate laws and regulations to protect health, safety and the environment.)

The Trudeau government and the EU renegotiated that section of the deal to appease critics in Europe, creating a special permanent court to resolve disputes. The fate of the investor court now hinges on all EU member states giving their approval, which could take years.

Canada's trade with the United States is many times larger, but the trade deal with the European Union covers a broader scope of trade issues, and a much larger market. Both deals cut tariffs on goods. But unlike NAFTA, CETA covers "sub-national procurement," the public contracts of Canadian provinces and cities, so European companies can bid on hydro or subway deals, and Canadians can do the same in Europe – though the final deal will include many caveats and exceptions. The EU deal covers extensions of drug patents in Canada and bigger trade quotas for agricultural products. It also appears to cover services more broadly than NAFTA, including financial services, and allows more labour mobility, including efforts to work on recognizing each other's credentials for professionals such as architects and engineers – although the governments have only released sketchy details on those changes.

The agreement will more than double the quota of cheese imported from the European Union to about 30,000 tonnes a year, which could take a bite out of Ontario and Quebec dairies' market share. However, Ottawa has assured the provinces it will pay compensation to cheese producers. The deal will also chip away at a trade barrier that currently protects Ontario wines and hard liquor, ultimately making European booze less expensive.

The EU has long been unhappy with Canada's legislation concerning patent protection for drug companies, believing it lags other countries and puts European drug makers operating in Canada at a disadvantage. Under CETA, Canada has agreed to adopt EU measures on so-called "patent term restoration." Drug patents typically last for 20 years, but if it takes more than five years between when a patent on a new drug is filed and marketing authorization is granted, the drug maker will now get an extra two years of patent protection as compensation. This could raise drug prices and cost provincial health plans, but the federal government believes the price hikes will be small and won't kick in for years. And the government is considering compensating the provinces.

The outline of the agreement suggests big changes ahead for Canada's auto sector, which is deeply integrated with the United States. Vehicles that are at least 50 per cent Canadian-made will enjoy open access into the EU market. Meanwhile, Canada will be allowed to export to the EU up to 100,000 vehicles a year that are at least 20 per cent Canadian-made. Considering Canada's total auto exports to the EU are currently only about 13,000, that's a big change. Sorting out how much of a car is Canadian-made could soon be a moot point, if the EU follows through with a similar trade deal with the United States. For Canadian consumers, the end of a 6.1-per-cent tariff on European imports will make German-made vehicles more affordable. The challenge will be making these new rules fit with Canada's existing deep relationship with the United States when it comes to auto manufacturing.

Recognizing foreign credentials is an issue that has dogged federal and provincial governments for years. Under the agreement, Canada and Europe will recognize professional certifications of each other's jurisdictions. However, a closer look suggests there is still plenty of work to do on this front. It is being left to the professional organizations in Canada and Europe to work out their own deals to recognize credentials under "mutual recognition" agreements. Professional groups, such as architects, engineers and accountants, are working towards mutually recognized qualifications.

Canada prides itself as a leader in financial services. While the United States and Europe took measures to support their banking sectors, Canadian banks avoided a bailout from taxpayers. The agreement proposes deeper links between the Canadian and European banking sectors. The EU estimates that half of the overall Gross Domestic Product gains it expects to receive from the deal will come from liberalizing the trade in services, including in the banking sector. Canada says the deal will open new markets for its domestic banking sector, while ensuring it can maintain government rules for the sector.

Under the Investment Canada Act, the Canadian government can review foreign takeovers based on a "net benefit" test. The minimum threshold for the review is being raised to $1-billion. Under CETA, that threshold will be increased to $1.5-billion, meaning the review won't be triggered unless a takeover involving an EU company reaches that threshold. The change reflects "the special relationship Canada has with the EU," the government said. However, CETA does not alter Canadian ownership restrictions in the airline, cultural and telecommunications sectors. 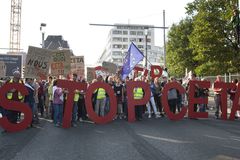