Amid all the self-righteous anger, the dejected wailing and the liberal gnashing of teeth over Donald Trump, we fail to see that he gets it absolutely right. His diagnosis of America's malaise is correct and it may help him to win the presidency.

Don't splutter; choke your outrage and listen because the Donald is pointing his finger at hideous truths that overeducated and insulated people across North America and Western Europe willfully choose to ignore.

Trump is rallying votes because he is correct in saying that high rates of immigration create intense competition for blue-collar jobs and opportunity in the United States. The oversupply of unskilled and semi-skilled immigrant workers has kept a lid on wage growth.

When we cringe at Mr. Trump's oratorical bombast, we kid ourselves. What is upsetting is not the racial slurs or the overweening egotism. Much more alarming is his exposure of economic reality. He reminds us of the vast hinterland of people who struggle to move forward, to pay bills and who have been left out of prosperity. In France, they call these people les précaires, those who live on the margin, who have to hustle, who find themselves shut out of France's socialist fortress of nationalized industries, prestige schools and protected government jobs.

North Americans love to jeer at the sclerotic economies of socialist Europe but within the Great Society, Americans have created a not dissimilar world of "us" and "them": The "us" who attended the top colleges and from there effortlessly segued into jobs on Wall Street or as "interns" in Washington and who now live in leafy suburbs on generous retirement plans. Mr. Trump is simply reminding the "us" that their comfort is built on a never-ending supply of cheap immigrant labour – "them," the maids, the gardeners, the delivery boys, the construction workers.

This is entirely logical. The unprotected population is expanding at a rapid rate thanks to immigration. According to the Pew Research Center, the U.S. population will increase from 324 million to 441 million over the next 50 years, with 88 per cent of that increase linked to future immigrants and their children. According to Pew, immigrants contribute to population growth by their numbers and above-average fertility – those who arrive are mainly of working age and more likely to be of child-bearing years.

This is terrific for employers who can dip into the surplus labour pool to expand their businesses without a sacrifice in profit margin. It explains how the American and British economies have enjoyed recent rapid expansion with almost no inflation. Wage growth has stagnated except in places where government action has boosted the minimum wage.

It explains why the capitalist class (the so-called 1 per cent of employers and wealthy professionals at whom Bernie Sanders hurls abuse) have done so well over the past two decades. The faltering Democratic candidate is missing the point; there is no great conspiracy of the rich robbing the poor. What there has been is a sharp expansion in the global work force since the 1970s, first because of postwar fertility surges and more recently when China and Eastern Europe joined the global capitalist economy.

It's all about demographics and Mr. Sanders admits as much when he rages against the offshoring of jobs to China and Mexico. So does Mr. Trump, in his absurd promise that, as president, he will command Apple to make its computers in America. He need not bother. The tide is turning; China's labour surplus is dwindling and will soon turn to shortage. In the meantime, however, the oil bust is creating new armies of migrant workers from Latin America, Africa and the Middle East.

It doesn't matter that Mr. Trump's prescription – the Great Wall to keep out Mexicans – is absurd. He knows it and he also knows that Congress will tear up his tax reform plan that would give Americans on modest incomes a "get out of tax free" card, paid for with the trillions of dollars held offshore by rich corporations. It does not matter that it doesn't add up.

What matters is that he is changing the argument and setting the agenda by pointing at the economic elephants causing havoc on every street corner in America. We don't yet know how far this strategy will take the Republican favourite. If he wins the nomination, he will certainly train his guns leftwards and steal some of Mr. Sanders's anti-establishment rhetoric to lure blue-collar voters away from Hillary Clinton.

So far, Mrs. Clinton's response has been lame. Her unfortunate slogan, "make American whole again," is almost an admission that Mr. Trump's diagnosis is right – a society broken, a protected privileged few in a gilded fortress, besieged by clamouring hordes trying to get through the door. 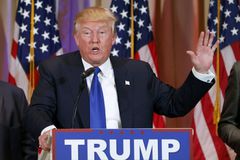 Opinion
Insults, innuendo and ignorance: The road to victory for Trump 2016
March 2, 2016

Opinion
Celebrity culture has a lot to answer for, namely, a certain Donald Trump
February 26, 2016 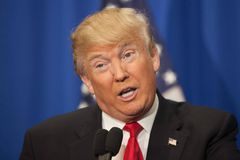