If Canadians are increasingly skeptical about whether their consumer price index (CPI) actually measures current consumer inflation, they have good reason to be. It doesn't, and wasn't designed to.

"The CPI" is a bit of a misnomer. There are actually several CPI measures. Statistics Canada's all-items CPI (the latest monthly update of which is being released Friday morning) and the Bank of Canada's CPIX are the most widely used. Both refer to changes in the price of an average household basket composed of 12 broad categories of goods and services. The CPI basket weights are mostly based on Statscan's Survey of Household Spending (SHS).

The SHS basket is broader than the CPI basket. It includes additional components that are not considered "current consumption." (For comparative purposes later in this article, however, we will restrict the SHS basket to its current-consumption components.)

The "all-items" CPI basket is neither as comprehensive as the SHS basket nor does it measure their common items the same way. The difference between the two baskets is largely attributable to how items under the shelter cost component are measured.

The "core" CPI, or CPIX, excludes even more: The costs of fruits and vegetables, gasoline, fuel oil, natural gas, intercity transportation, tobacco and mortgage interest, as well as all indirect taxes.

The differences between the CPI and SHS baskets are not arbitrary. The all-items CPI exclusions seek to limit costs to net household spending on shelter. The official concept assumes a homeowner is his own landlord, and as such includes only those costs a landlord could deduct for tax purposes. With this view, fees and indirect taxes are irrelevant. Renovations are considered capital outlays. Current mortgage principal payments are also viewed as capital outlays, since they're recoverable costs on an appreciable asset – the home.

The additional CPIX exclusions seek to further reduce price index volatility. With this view, food, fuel and transportation are excluded, as their prices are mostly determined by relatively volatile international commodity markets. And mortgage interest is excluded because its role in CPI is highly circular: CPI is used by the Bank of Canada as its guide to setting its policy interest rate, which provides a baseline for commercial banks' mortgage rates; so, higher mortgage costs are both a cause and an effect of higher CPI.

All this means that CPIX, the basket used for the Bank of Canada's policy-guiding inflation anchor, includes neither current mortgage interest nor principal.

Regardless of the CPI concepts and rationale behind them, one thing is clear: A great deal of what's in the average Canadian household's annual shopping cart is not in the CPI basket. And that difference in basket composition has resulted in a divergence in their respective trends. Between 1997 and 2011, the years for which SHS data are available, household spending increased an average of 3.4 per cent annually. Over the same period, the all-items CPI and CPIX increased 2.0 per cent and 1.7 per cent a year, respectively.

The CPIX plays a significant role as the operational guide for the Bank of Canada's monetary policy, as well as a fiscal policy benchmark for the federal Department of Finance. The all-items CPI, however, is the one that directly affects Canadian households.

Most Canadian household income derives from two broad sources: Compensation (i.e. paycheques) and government transfers. Most government transfer programs either use the all-items CPI as an index or trigger for payment increases. Not all households have their compensation indexed to the CPI, and their numbers have declined with the decline in collective bargaining. The median household income from these two sources increased just 0.8 per cent annually between 1997 and 2011, while the average increased 1.3 per cent.

The CPI plays a significant role in determining household financial security through income indexation. However, the basket of goods and services on which it's based understates average annual Canadian household spending. Yet as most Canadian households continued to fall behind, as their debts increased faster than their incomes, the only public debate has been over whether the items in the CPI basket are being correctly weighted – not whether its composition accurately reflected annual household spending. It clearly doesn't, nor was it meant to. That's the real problem.

Sam Boshra is an independent Montreal-based economist, and editor for EconomicJustice.ca. The author would like to acknowledge the help of Andrew Baldwin, a member of the Royal Statistical Society's RPI CPI User Group. A Better Inflation Indicator, Andrew Baldwin, 2011. 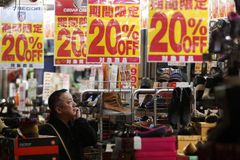