A convent near my house in Rome runs a soup kitchen and I have casually watched its transformation over the years. The lineups are getting longer, the faces younger and more Italian. A few years ago, the customers of the good sisters seemed mostly out-of-work immigrants. No longer. The European jobs crisis is an equal-opportunity work killer.

As the jobless numbers rise, talk of a "lost generation" is no exaggeration. All the programs designed to create jobs as austerity grinds through economy after economy have backfired; their general uselessness has only been highlighted by the strong job growth in Canada and the United States. European labour deregulation, for example, was designed to make it easier to hire and fire. Instead, firing has utterly dominated the employers' agendas.

In the euro zone, talk of the immediate collapse of the euro has stopped. In its place is talk of the dangers of rising unemployment and its ability to strangle economic recoveries and breed social unrest and political extremism.

"[German Chancellor Angela] Merkel and [Finance Minister Wolfgang] Schaeuble know very well that the future of the euro is not just decided in Brussels or Berlin but on the streets of Madrid, Athens and so on," ING economist Carsten Brzeski said in a report last month. "High youth unemployment combined with hatred for Germany can turn into populism and nationalism quite quickly and, in the extreme case, lead to an end of the currency union."

In response, European leaders are launching a war against unemployment, or say they are. Some of them hope the June 28-29 European Union summit will become the front line for the war. Dream on. At the summit, you can expect the usual blathering about labour reform, retraining funds and project bonds aimed at financing bridges and roads. Most of the proposals and initiatives will be unimaginative, inadequate or ignored. What is really needed is a program to get banks lending to small and medium-sized businesses again and the ability to start companies as cheaply and quickly as it is in Canada, the United States and Britain.

The youth numbers are more shocking. Nearly one in four 16- to 24-year-olds is out of work; the youth jobless rate in Spain and Greece is an astonishing 60 per cent, in Italy about 40 per cent. "Youth joblessness at these levels risks permanently entrenched unemployment, lowering the rate of sustainable growth in the future," economist Tom Rogers, an adviser to Ernst & Young, said in a jobs note in late May.

The figures may be exaggerated somewhat. Official Eurostat figures exclude students from the work force, which makes the percentage of workers who are unemployed look bigger than it actually it. Some of those listed as unemployed may be pulling in a few euros in the black, or untaxed, economy, which is vast in countries such as Italy. Still, there is no doubt that European unemployment has reached brutal dimensions. What's worse, it's still going up.

The International Monetary Fund, the European Commission and national governments have consistently underestimated the euro zone's job-shredding ability. When it became painfully apparent about a year-and-a-half ago that job destruction, not debt accumulation, was the biggest threat to political stability and economic revival, politicians duly went into hypocrite mode, promising growth initiatives while doing little about it.

French President François Hollande is a case in point. "Hollande had no sooner declared war on youth unemployment than he was dismissing European Commission calls for necessary reforms in France," Niall Ferguson and Pierpaolo Barbieri wrote this week The New York Times. "These included lowering employers' social security contributions, reversing last year's hike in the minimum wage and reforming the unemployment benefit system 'to ensure adequate incentives to work.'"

Meanwhile, the one area with the greatest potential to stimulate job creation – bank lending to businesses – is apparently going nowhere fast. Many banks remain under-capitalized. The touted European banking union would see the creation of a bank resolution fund, bank recapitalization formulas and common deposit insurance. The upshot is a lending split between northern and southern Europe that is crippling employers in the south, who are paying, relatively speaking, monstrous rates for bank loans. Perfectly good businesses are dying because they can't get credit, not because their products are duds.

Europe has to make it easier to start businesses if job creation is to pick up momentum. Note that Britain's unemployment rate is 7.8 per cent. How can that be? Britain has a plowman's lunch of problems – gaping budget deficits, rising debt, high inflation, a housing shortage, de-industrialization. But what it also has is flexible labour laws and the ability to start a company at minimal cost with minimal paperwork. The same exercise in, say, Italy, can take years and dozens of permits in what is effectively a bureaucratic shake-down racket.

So when European leaders talk about the new war on unemployment, don't take them seriously. The most effective solutions are the ones being ignored or played down. Unemployment will keep rising. Then the unemployed in the worst-hit countries will take to the streets. 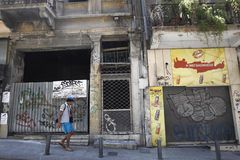