The vehicle sales winning streak that Fiat Chrysler Canada proclaimed for more than six years following the 2008-09 recession would have ended in 2012 under a new way of calculating monthly sales.

The Canadian unit of Fiat Chrysler Automobiles NV said Thursday that revised figures using a new methodology show sales would have fallen in April, 2012, December, 2012, and in single months in each of 2013, 2014, 2015 and this year.

The monthly streak of year-over-year sales gains was proclaimed in news releases through most of that period, ending in November, 2015, when Fiat Chrysler Canada declared that sales that month represented its 72nd consecutive monthly increase. That was the last month during which the monthly sales release mentioned the sales streak.

Under the old way of calculating monthly sales, that streak continued through June of this year. The company began using the new methodology in reporting its July sales, which fell from July, 2015, levels.

August sales plunged 20 per cent from a year earlier.

The change in how sales are calculated in Canada follows a similar move by FCA US LLC, which revised its methodology after acknowledging it was the subject of a Securities and Exchange Commission investigation.

That probe, in turn, came after lawsuits by a Chicago-based dealer group that said a bonus program led to dealerships buying vehicles themselves and registering the vehicles as sold during one month in order to meet monthly sales targets, then reverse the transactions the next month.

Documents filed in a lawsuit against the U.S. company in an Illinois court said one U.S. dealership was offered $20,000 (U.S.) to report the sale of 40 vehicles.

FCA US has responded that the suit is baseless and filed by disgruntled dealers.

Fiat Chrysler Canada offers a so-called stair step bonus system that rewards dealers based on how their sales stack up against targets established by head office. Other auto makers have similar programs.

The bonus system has led to dealers purchasing vehicles themselves from inventory and then putting the vehicles on their used-car lots in order to meet bonus targets, dealer sources have said.

Searches of dealer websites in Canada have revealed multiple dealerships offering used cars, trucks, crossovers and minivans with less than 200 kilometres on their odometers.

Fiat Chrysler responded at the time that it stood by its sales numbers and that many of the vehicles were being offered as loaners to service customers.

The new methodology outlined Thursday in what Fiat Chrysler Canada said was an explanatory note said sales are now calculated based on sales to retail customers, fleet sales delivered directly to fleet customers by the company and vehicles sold for company and marketing uses.

Over all between 2011 and July, 2016, sales were 180 vehicles higher using the new sales reporting process, Fiat Chrysler Canada said.

"The objective of this new methodology is to provide in FCA Canada's judgment the best available estimate of the number of FCA Canada vehicles sold to end users through the end of a particular month applying a consistent and transparent methodology," the company said in its explanatory note.

Both the U.S. division and Fiat Chrysler Canada said sales figures have no impact on how revenue is reported because revenue is recognized by the auto maker when dealers purchase the vehicles, not when they are purchased by retail or fleet customers.

Ford said its sales rose to 28,987 vehicles in August, compared with 26,581 units during the same month last year, fuelled by increased demand for trucks.

Fiat Chrysler's results were calculated using a new method, in line with reporting changes in the United States, amid an investigation by U.S. regulators into claims the company inflated sales data.

In July, total industry auto sales in Canada dipped nearly 3 per cent compared with the same month a year earlier.

According to a June report by Bank of Nova Scotia, Canadian auto sales were expected to rise to 1.96 million vehicles in 2016, up from a record-breaking 1.90 million units last year. 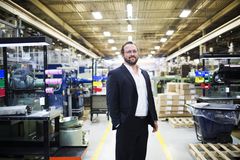