A fiery derailment in New Brunswick Tuesday night was the third time a crude-laden train has caught fire in recent weeks.

Three of the tank cars that derailed in New Brunswick on Tuesday night were loaded at a terminal in southwestern Manitoba, Canadian National Railway Co. said. The location raises the question of whether some of the oil originated in the Bakken region.

On Thursday, CN spokesperson Jim Feeny said a sudden wheel or axle failure likely caused the train to derail. "The focus of the investigation will be what caused the sudden failure of the wheel or wheel and axle combination and when did it occur," he said.

The safety of moving oil by rail has been under scrutiny since last July, when a train carrying Bakken crude derailed and exploded in Lac-Mégantic, Que., killing 47 people. U.S. officials have since warned that oil from the Bakken formation, which straddles North Dakota and parts of Saskatchewan and Manitoba, may be more volatile than traditional oil.

The company did not clarify on Wednesday whether any of the oil involved in the derailment the more volatile Bakken variety, which has been subject to growing questions about the dangers of transporting that type of crude by rail.

Witnesses in New Brunswick described a massive fireball and cloud of smoke at the site of the accident, which forced at least 150 people from their homes. By Wednesday evening, CN said the fire had diminished, but three tank cars, including one that was filled with crude, were still burning.

A total of 17 cars carrying crude oil, liquefied petroleum gas and other goods derailed near Plaster Rock on Tuesday evening, causing fireballs and a huge plume of black smoke. No one was injured. Five of the tankers carried crude and were on their way to Irving Oil's refinery in Saint John, N.B.

The crude in three of the cars was loaded at a terminal in southwestern Manitoba, according to CN spokesman Mark Hallman. He said the oil was from wells in Saskatchewan and Manitoba, but would not confirm whether they were in the Bakken region.

The crude oil in the other two was loaded at a northern Alberta terminal, Mr. Hallman said. A spokesman for the Transportation Safety Board said on Wednesday that the train's emergency brakes may have been activated suddenly after an interruption in the air flow to the brakes.

Mr. Holbrook said rules govern what types of dangerous goods can be close to each other on a train and whether buffer cars are required between certain commodities, but he could not comment immediately on whether the rules were followed in this case. "That's certainly something the investigation team will be looking at," he said.

Transport Canada was harshly criticized for its oversight of rail safety in a recent report by the Auditor-General. But Prime Minister Stephen Harper defended his government's record during a stop in Inuvik on Wednesday. "We have made significant investments in rail safety and rail inspections," he said. "We have increased both of those vastly."

Darren Burgoyne, a volunteer firefighter who was among the first on the scene, said his colleagues did not know what they were dealing with when they were called around 7 p.m. "What the scary part for me was the huge plume of black smoke that was blowing right towards, it looked like towards the village but it was more or less bypassing us … and of course our fear was we didn't know if it was toxic or not," he said.

Federal Transport Minister Lisa Raitt issued a directive last fall requiring railways to inform municipalities about the kinds of dangerous goods they were carting through their communities. A spokesman for CN said it is too soon for those regulations to have come into effect, but added that the company had been sharing information with communities that asked for it before the regulatory change.

At a press conference on Wednesday, CN chief executive officer Claude Mongeau apologized to residents who were evacuated. By Wednesday afternoon, heavy equipment, including excavators, bulldozers and trucks, were at the site of the derailment to help with cleanup.

Steve Legace, a resident of Plaster Rock, said tensions had calmed considerably since Tuesday evening, when many did not know the extent of the risk. "It's kind of unnerving, I guess, knowing that we have things that close going through our village and not knowing what's being carried on these vessels," he said. 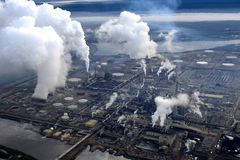 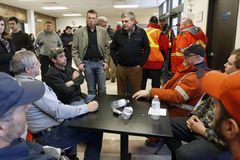 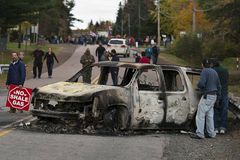