Bombardier Inc. has landed $372.5-million in federal aid, a cash infusion that will help the company's aerospace programs but falls far short of the $1-billion it initially sought from Ottawa.

The bulk of the money, which comes in the form of a "repayable contribution," will go toward research and development for Bombardier's Global 7000 business jet, with additional support for the C Series program.

Bombardier has been lobbying for federal support since late 2015, when the cash-starved company received a $1-billion (U.S.) pledge from the Province of Quebec to help it stay alive while it brought the C Series to market.

Subscribers: Bombardier seems to have escaped Trump's radar — for now

Designed to compete against industry giants Airbus and Boeing, development of the single-aisle passenger jet went billions over budget and more than two years behind schedule. The company was, by late 2015, "on the brink of bankruptcy," chief executive officer Alain Bellemare later said.

While Quebec's investment provided Bombardier a lifeline, it only went part of the way in addressing the company's financial troubles. Bombardier has also refinanced some of its debt and raised cash through the sale of a large stake in its rail division.

Tuesday's announcement is another step toward putting the business on sounder footing.

"We have a proud and long-standing relationship with Bombardier and today is another milestone," Innovation Minister Navdeep Bains said on Tuesday evening at a Bombardier facility in Dorval, Que. "I believe Bombardier is indeed back."

The new money will help shore up Bombardier's financial position, Mr. Bellemare said. "This gives us the additional flexibility we were looking for … to weather any near-term market challenges and the flexibility to look at future programs," he said.

The company has made operational progress on C Series of late, and last year announced a major order of C Series aircraft from Delta Air Lines.

"The position of the company has changed" since the initial talks about federal help, Mr. Bains said. "Our discussions have changed accordingly." He called the deal with Bombardier, "the right decision for this time."

The funding will be provided over four years, and will be split between the Global 7000 program, which will receive about $250-million, with the remainder going toward the C Series.

"It's supportive of continuing development of the Global 7000, which is a critical aircraft, when you talk about Bombardier's larger, long-term goals," said Chris Murray, an analyst at AltaCorp Capital.

"And it lends a vote of confidence to buyers of both the Global 7000 and the C Series, for what it signals in terms of sustainability of the programs."

The larger portion of the government's investment will be made through a federal fund dedicated to supporting new technologies in aerospace and defence.

The portion earmarked for the C Series will flow through existing agreements made when the federal government first contributed to the C Series program – a total of $350-million, first announced in 2005.

"The structure is probably a little more compatible with some [World Trade Organization] rulings. It's not as likely to be challenged, although I still expect some pushback," Mr. Murray said.

In December, 2016, Brazil said it would challenge Quebec support for Bombardier, calling the contributions "state subsidies."

On Tuesday, Canada's Trade Minister, François-Philippe Champagne, said that should the deal face WTO complaints, "we'll fight that wherever we need to."

"I am very concerned about this agreement and its implications for Canadian taxpayers," interim Conservative Party leader Rona Ambrose said. "Jobs aren't created by handouts to a favoured company." 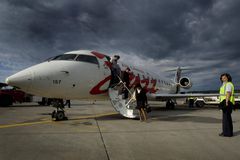 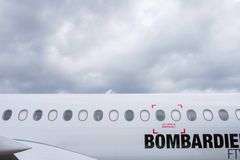