General Motors of Canada Co. stands to be eligible for more than $200-million in funding from the federal and Ontario governments after agreeing to spend $550-million at factories in Oshawa and St. Catharines.

The federal government's Automotive Innovation Fund and Ontario's Jobs and Prosperity Fund each offer as much as 20 per cent to auto makers and other companies that invest in new or existing facilities. If the entire investment the car company is making in an assembly plant in Oshawa and an engine plant in St. Catharines qualifies for the programs, GM Canada would be in line for $220-million.

"You can get 20 per cent by showing up," one industry source said.

The bar for how much governments are willing to give out was raised substantially last year when Jaguar Land Rover Ltd. was courted heavily. The British-based company eventually rejected a site in Windsor, Ont., despite being offered financial help of 30 per cent of its project cost by the federal government, the source said. The luxury-vehicle maker eventually built a manufacturing plant in Slovakia.

The federal government is changing the financing it offers under the Automotive Innovation Fund to provide grants instead of loans that were treated as revenue and then taxed back by Canada Revenue Agency.

The loan program has been heavily criticized by auto makers and some companies rejected federal participation and took money only from Ontario.

A $560-million investment by GM Canada and its suppliers to build the next-generation Chevrolet Equinox at GM's plant in Ingersoll, Ont., has no government financing, but retroactive funding of $86-million was provided by Ontario in the case of the Fiat Chrysler Automobiles NV minivan plant in Windsor.

GM Canada has acknowledged that it has been discussing financing with the governments, but has put no numbers on the table, sources familiar with the talks said.

The company is "in discussions with our provincial and federal government partners on possible support agreements that can help to optimize our competitiveness for the future," company president Stephen Carlisle said in a community update issued after unionized employees voted in favour of the agreement of GM's contract offer at meetings on Sunday.

"We are exploring how to build an advanced manufacturing footprint that sets new standards for innovation, quality flexibility productivity and environmental sustainability," Mr. Carlisle said. "Our governments understand the importance of this opportunity."

"I have talked to [governments] about getting into the game," Mr. Dias said Monday. "If there was ever a time when we needed government to show leadership it's right now."

The Unifor deal and the commitment General Motors Co. has made to invest in its Canadian operations is "a key success for the auto sector in Ontario," the province's Economic Development and Growth Minister Brad Duguid said in a statement Monday.

"Our government is now working with our partners at GM, Unifor and the federal government to assist in landing these new product investments," Mr. Duguid said.

GM agreed to extend production of the Cadillac XTS and Chevrolet Impala passenger cars assembled in Oshawa beyond their originally scheduled cancellation dates in 2018 and 2019 respectively. But the key part of the agreement is a plan to ship between 70,000 and 100,000 unfinished Chevrolet Silverado truck bodies from Fort Wayne, Ind., to Oshawa, where they will be painted and Unifor workers will install interior components and complete the vehicle assembly. 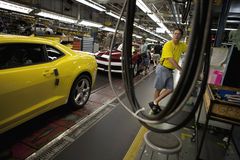 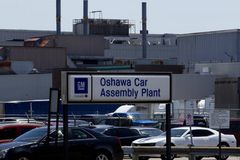