Unhappy with the meeting spaces provided in your company’s offices? Or maybe there just isn’t enough room to accommodate everyone?

A short-term office rental startup called Breather is counting on that. It provides alternative meetings and work spaces in 10 cities in North America and Europe, including three in Canada.

Breather was founded in Montreal in 2012 by Caterina Rizzi and Julien Smith after Mr. Smith, now the company’s chief executive officer, realized there was a hole in the market for people like him who were tired of working on a laptop in Starbucks. Breather now counts Ottawa and Toronto, which it expanded to last year, among its Canadian markets.

Breather hasn’t invented the concept by any means. Co-working space is a multibillion-dollar industry that’s been around for more than 10 years in North America. Real estate service Jones Lang Lasalle reports that shared work spaces now occupy 27 million square feet of office space in the United States alone, with U.S. giants such as WeWork and Canadian counterpart Regus dominating the field. But Breather represents a fresh wave of office-space options, providing style as much as function.

“There’s a large market out there for offsite space, groups within a company who want to get out of the office, want to go to a different neighbourhood in the city, or even within their building just want to get out of their company’s space,” says Greg Hayes, Breather’s New York-based head of portfolio strategy.

To that end, Breather’s office spaces have what he describes as a “Scandinavian feel to them.” A team of in-house designers creates welcoming, well-lit spaces that accommodate from two or four people or up to 30 to 40. Consequently, customers won’t find any stuffy, mahogany rooms in the company’s inventory. Instead there is a variety of modular furniture, and creature comforts such as art, plants and coffee-table books on display.

“We are not creating just rooms that have only a boardroom table and chairs in them,” Mr. Hayes says. “Almost all of our rooms have a lounge area as well, and feedback from our users has been that a lounge area is very important.”

Technology is also of the cutting-edge variety, with each space usually offering a large 58-inch TV connected to Apple TV, as well as projector screens to provide clients with a seamless method to display presentations. 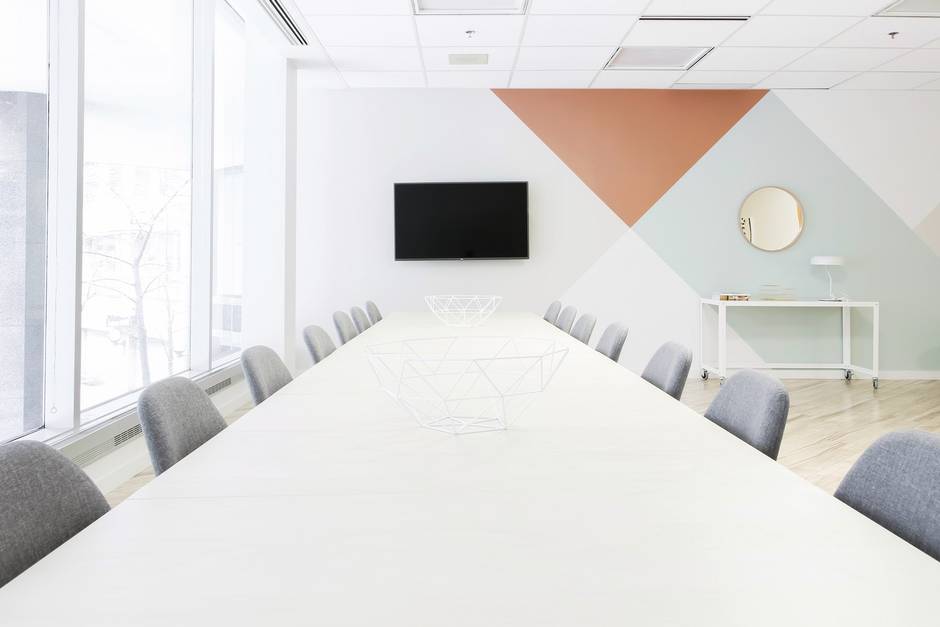 Breather's co-work spaces, like this one in Toronto, tend to have a 'Scandinavian feel to them.' (Breather)

The spaces appeal to a wide array of clients. In Toronto, for example, where Breather has 21 locations, the company has counted the big five banks, independent law firms and entrepreneurs, as well as startups such as marketing company Influitive, among its customer base.

“It can be difficult to find office space here,” says Elise Trudeau, head of real estate for Montreal and Toronto for Breather. “A lot of office tenants might not have room for expansion, or maybe they don’t want to take on more space, so it’s giving us a really interesting opportunity to come in and have that overflow space for our clients.”

Space can be booked by the hour, day or even week, via the website or an app that functions along the lines of those used by companies such as Airbnb.

“We’re definitely not trying to be a replacement for traditional office space,” Mr. Hayes says.

However, tastes and trends in meeting and office spaces mean that Breather has to be on the cutting edge of what customers are looking for in meeting spaces, and the company prides itself on being flexible and nimble in moving with the times. Even traditional staples such as meeting tables are constantly evolving in the business world.

“Meetings today are more about everyone participating and so technology is enabling everyone to participate,” says Sharon Turner, vice-president at HOK Toronto, an architecture and design firm which has a long history of designing office spaces all over the world, although it has not worked on Breather offices.

“So the table is no longer a rectangular table but more often a round table, so there is no more head of the table.”

Ms. Turner says soft seating areas are also very much in vogue when it comes to hosting group interaction, and collaborative work is very much a driving force in office design, and one of the main reasons people come into an office in today’s era of working from home and hot-desking. 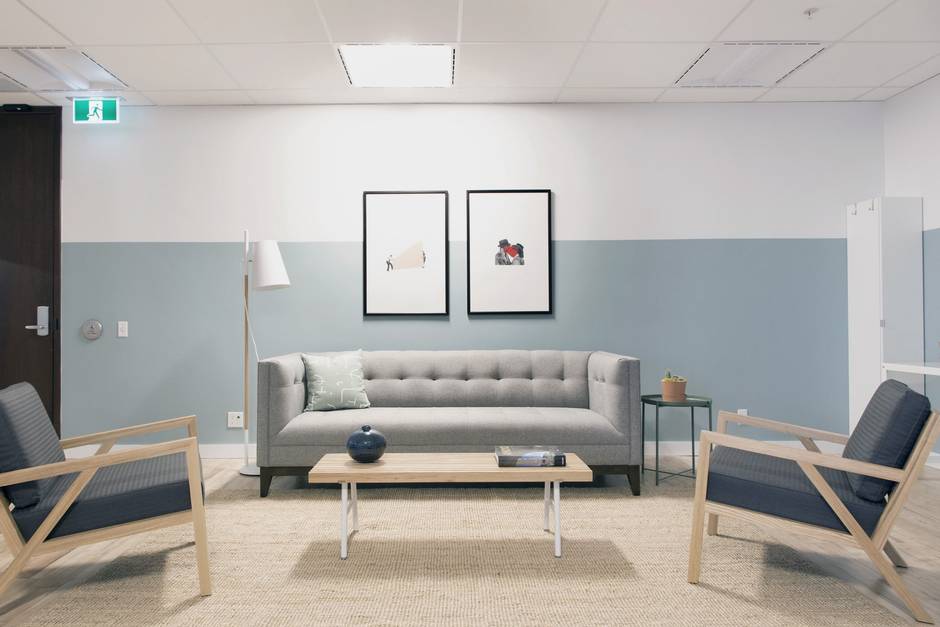 'We are not creating just rooms that have only a boardroom table and chairs in them,' says spokesman Greg Hayes. 'Almost all of our rooms have a lounge area as well, and feedback from our users has been that a lounge area is very important.' (Breather)

As a result, she says the ability to engage employees and attract new talent is leading to a more activity-based way of working, where office space is designed to support every person’s needs during the day.

“The thought is that you wouldn’t sit at one spot at your workstation throughout the entire day but you would move through the space depending on the kind of function that you were doing,” she says.

But while open, flexible, multitasking office spaces are important for today’s employees, being able to cater to those who need quiet office space is still important, too.

“Hierarchy isn’t defining whether or not you need private space any more,” Ms. Turner at HOK says. “It’s the job you’re doing in the day and if it’s concentrated, heads-down, really focused work then you need a private space and it doesn’t matter whether you’re the admin of your organization or the CEO of the organization, you need these kinds of spaces.”

Ron Devenish, head of business development at Truspace, an office interior design company with headquarters in Edmonton and Toronto, says one of the driving factors for the majority of his clients (his company hasn’t worked with Breather either) is creating efficient spaces that maximize the return on every dollar spent. He adds that in many cases the brand of a company will dictate what kind of office space they are looking for, so a law firm may want something very different compared to a video-game production company.

While he says that aesthetic features such as exposed ceilings are still proving popular, as well as collaborative spaces that are as simple as a coffee table with two chairs, meeting rooms are still very much a requirement in most offices that Truspace works with.

However, flexibility in these spaces is important, so the popularity of moving walls, along with modular furniture and wireless IT equipment is continuing to grow.

But ultimately, as companies like Breather can attest, what employees really want from their work spaces is choice.

“Having the ability to make your own choices and be driven by culture and driven by job satisfaction and results from your own efforts and the rewards that follow from those is more the way it’s going rather than sitting at a desk from nine to five,” Mr. Devenish says. 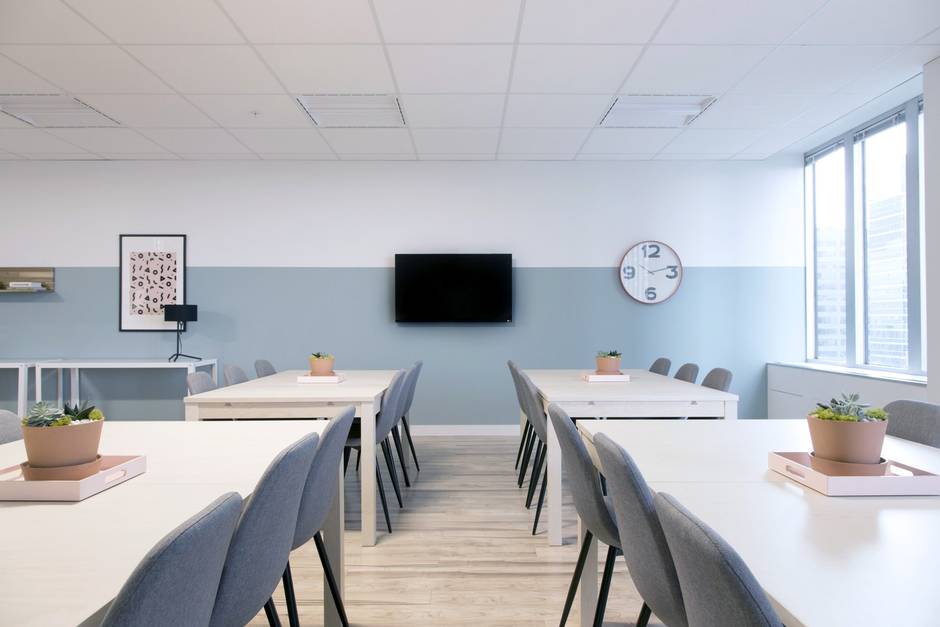 Through its proprietary smartphone app, Breather has tried to make the process of finding, booking and checking in to office spaces spaces as seamless as possible.

“Once they’ve downloaded the app and connected a credit card to the app, [customers] can book a space for as short as an hour, but typically we’ve seen bookings for a day at a time up to a week at a time,” says Mr. Hayes of Breather in New York.

The company requires no membership fee, and once customers have signed up they can can enter specific criteria in the app’s search function. They can then browse spaces by entering a nearby address, postal or zip code, or even a preferred neighbourhood. Results can be narrowed down further by indicating a date, duration, space size, or any amenities needed such as TV screens and specific presentation technology.

Similar to apps used by Uber or Airbnb, customers are able to store their payment information and reserve space on an as-needed basis, without any long-term contracts.

The app also provides customers with access to the space and all pertinent building information, configured by Breather in conjunction with each building’s landlord.

Prior to each meeting, the Breather app delivers a unique pin code to the customer’s mobile device, granting easy and secure access to each space. This pin code can be shared with all invitees and expires at the end of each reservation.