Skip to main content
Wallace Immen
Toronto
Special to The Globe and Mail
Published May 8, 2017

Which is more challenging: building a restaurant in a space where you can’t even touch the walls or ceilings because they’re protected by heritage designations, or creating an alluring restaurant in a well-known building that’s been stripped back to the bare concrete?

The challenge: Work within historic character

The century-old store was originally built as the flagship of Robert Simpson Co., or Simpsons. A 1920s expansion in the heyday of Art Deco design gave the entrance at the northwest corner of Yonge and Richmond streets elaborate bronze trim around the walls and a striking central pillar featuring backlit art glass. 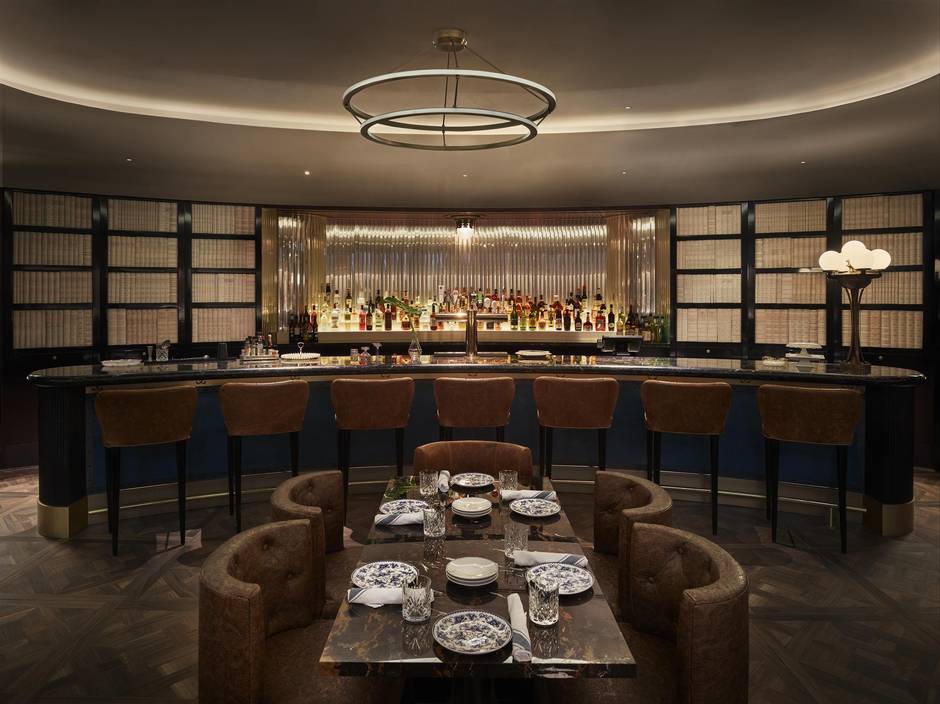 An agreement with the City of Toronto that HBC inherited as part of its acquisition of Simpsons in 1978 specified that all the entrance’s interior decoration and even the terrazzo floor had to be protected in any future use of the space.

The space was little known because display windows blocked the view from the street and the floors above were used for storage, despite having dramatic etched glass windows.

Oliver & Bonacini considered more conventional spaces in the store when HBC asked it to come up with an upscale restaurant to accompany the new Saks Fifth Avenue, but found the unique room irresistible. “There were many issues, but we looked at them as opportunities,” Mr. Oliver says.

The solution: Build around and over

The former entryway needed new lighting as well as heating and cooling, but nothing was allowed to be attached to the walls or ceiling. “We came up with a frame around the decorative centre pillar that’s completely independent of the rest of the structure. It’s like the world’s biggest floor lamp,” says Matthew Davis, founding partner of Toronto-based DesignAgency, which planned the reincarnation of the space. A canopy of teardrop-shaped lamps cascading from the framework was inspired by Art Deco design as well as Argentina, the restaurant’s cuisine. Former advertising inserts in the lower section of the pillar were replaced with decorative glass to complement the character of the heritage-etched glass above.

There were huge challenges installing utilities, Mr. Davis adds. New heating and cooling ducts had to be carefully run above the ceiling, requiring a long series of approvals from the city to be able to cut vents through the heritage surface. 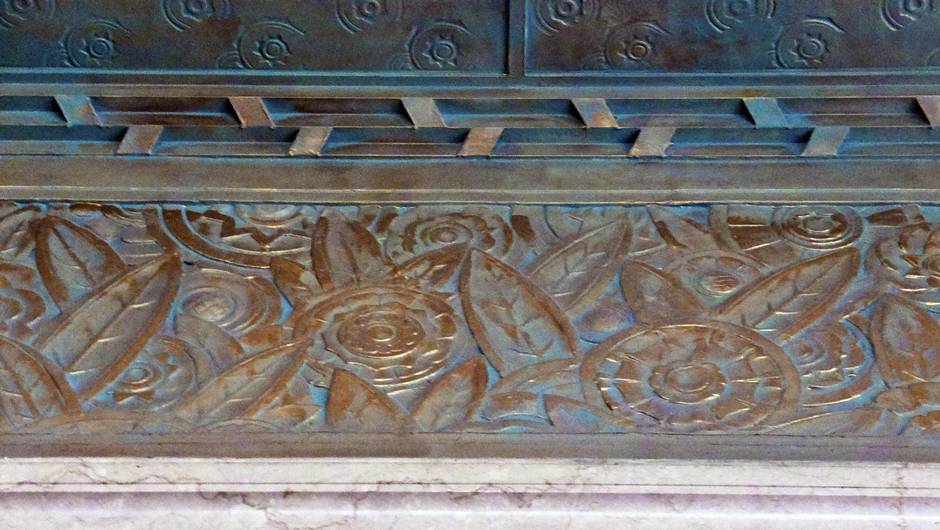 Detail of the ceiling trim at Lena. (Wallace Immen/The Globe and Mail)

The floor couldn’t be changed, but it had a distinct slope, so “if you’d put a table on it, the soup would slosh out of your bowl,” Mr. Davis says. To remedy that, the rebuild kept the original terrazzo but levelled it with protective layers of foam and laid a new floor on top.

While the designers had original blueprints to work with, they didn’t always match the structures they found between walls, so installing an elevator connecting the four floors of the restaurant without removing walls became a particularly tricky process. A former storage room below ground level became the Bar La La (in homage to the nickname of the mother of the head chef, not the movie) and two floors of restaurant and private dining rooms were created above the main restaurant. 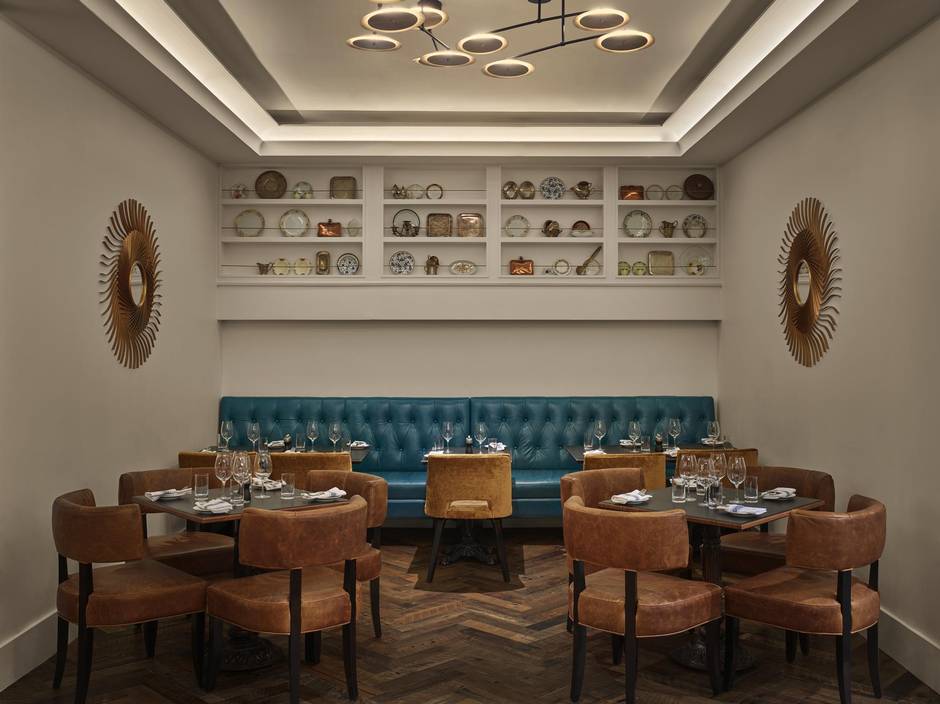 Because of all the challenges, construction took more than six months longer than originally planned. “Whenever we wanted to change one thing, it would affect something else. And anything we did had to go through a heritage approval,” Mr. Oliver says.

“Ultimately, it costs a lot more money whenever you’re dealing with heritage, but you take the good with the bad. Touch wood, despite being more expensive, it was worth it.”

The challenge: Envisage a new domain

In Yorkville, another space known to generations of Torontonians presented a different opportunity. The former Four Seasons Toronto hotel was bought by Camrost-Felcorp Inc. and rebuilt as a condominium, now known as Yorkville Tower. The second floor, which formerly housed venues including Truffles restaurant, had been stripped to the bare concrete, with even the windows removed.

New York-based The One Group had originally dismissed Yorkville as a location for its first restaurant in Canada because the spaces available in the midtown area were too small for its needs, says Jonathan Segal, chief executive officer of the company that runs 18 restaurants under its STK brand. 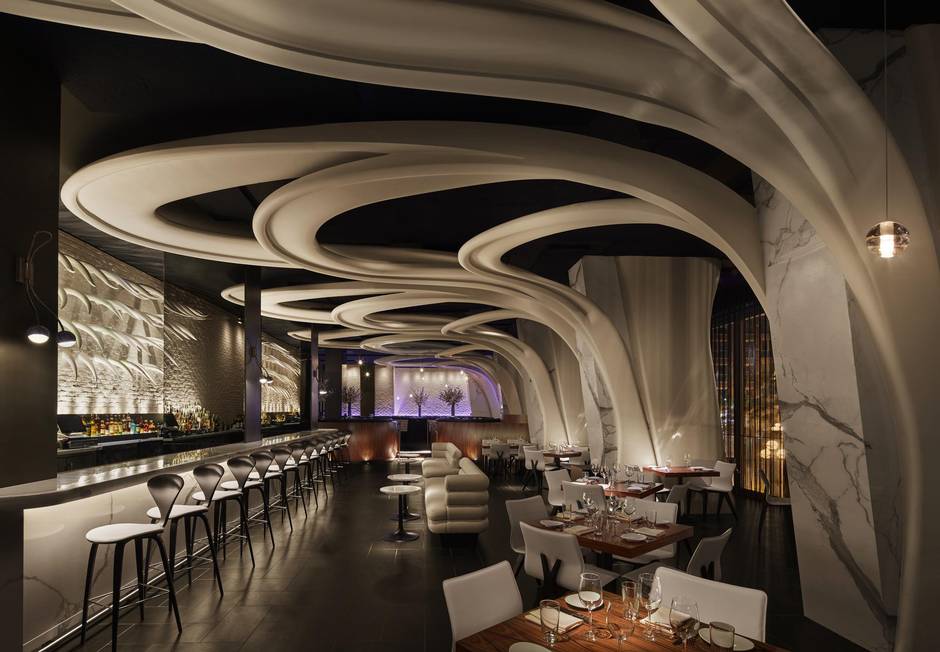 The One Group's first Toronto STK restaurant, in Yorkville in the former Four Seasons hotel, incorporates the curves and rounded corners that are hallmarks of the brand. (Nikolas Koenig/DesignAgency)

The space at Avenue Road and Yorkville Avenue got his attention because it was large. “But it was on the second floor and second-floor restaurants are a challenge,” Mr. Segal says.

It would require building a new staircase and elevator, which made for significant additional expenses. There were also a number of unmovable load-bearing columns in the middle of an area that would otherwise be ideal for the bar and a bistro area.

Another factor was that the ceiling height was limited. Pipes and utilities for the building that couldn’t be relocated ran through the ceiling. And the restaurant would also feature a DJ and late-night parties, so it needed soundproofing to avoid noise problems for residents above.

The solution: Lighten a heavy room

Mr. Davis, whose company was brought in to design a solution, says the project was helped by STK’s brand guidelines. The designs of all the company’s existing steakhouses feature sensuous curves and rounded corners. Required elements are banquettes with rosewood trim, stone and brick walls and iconic steer horns above the bar and ceilings, and lighting that creates a theatrical atmosphere.

Expanding the sense of overhead space and giving the bar a relationship with the rest of the room were prime challenges. Mr. Davis’s group DesignAgency solved the challenges by sheathing the columns in white marble and designing fibreglass filaments that seem to emerge from the columns and flow across the ceiling. The columns that divide the bar were mirrored to reflect the decor and make the room seem higher and wider. 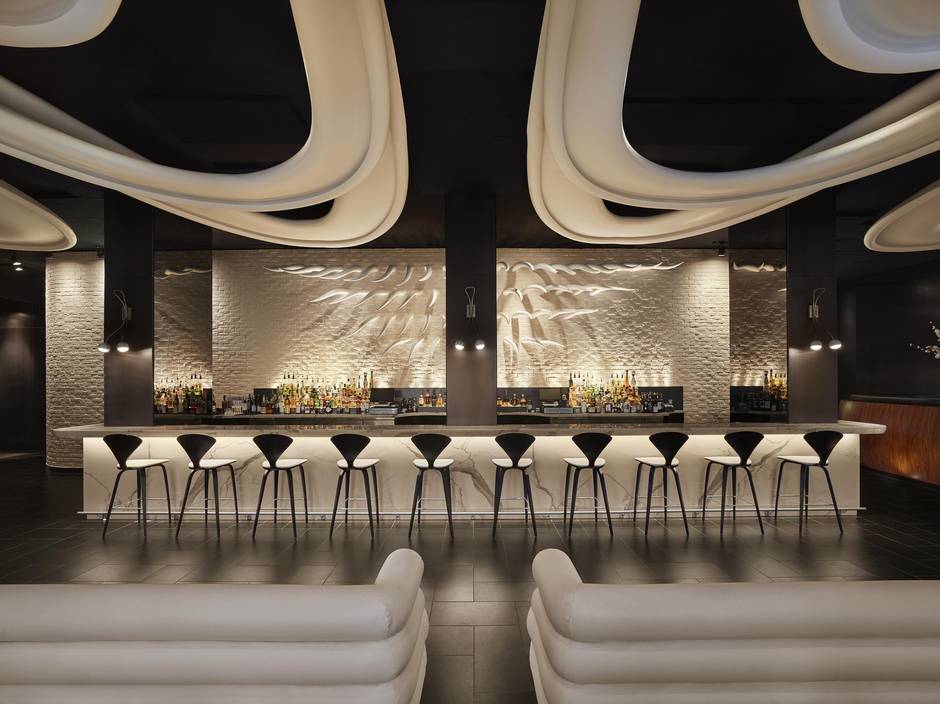 The designers with DesignAgency broke the big space at STK into smaller zones. (Nikolas Koenig/DesignAgency)

Both ends of the room were clad in curving white brick, with floors at a higher level than the centre to enhance the feel of theatrical stages. “Even though it’s a large restaurant we wanted to break it into small zones. So we created areas that are separate, but reflected off mirrors,” Mr. Davis says. The design team spent weeks getting the right lighting balance and pinpointing features.

A sound barrier in the ceiling required adding several levels of noise-dampening material. It was extremely costly “but it was important to make this space work as a supper club that is a good neighbour,” Mr. Davis says.

So ultimately, which is more challenging? “Sometimes, it can be easier to use the existing character of a space as a springboard. I find that with a blank space, it initially takes longer because you start with just the brand and create a narrative,” Mr. Davis says. “Once you start construction, though, the blank slate is much easier, because you know where you’re starting from and there are fewer surprises,” he says. “But either way, it can be a lot of fun to revitalize a space.”