In this fourth of a six-part series, Globe and Mail Africa correspondent Geoffrey York investigates how Africa's growth is changing its future.

Claudio Scotto paces the factory floor and throws his hands to the sky. His machinery is idle, the diesel generator has broken down – and now the repairmen are insisting on cash before they stir themselves.

"I had a moment of hope, but it disappeared very quickly," he mutters. And then he rushes off to negotiate with the truckers who transport the raw material to his factory. They, too, want a raise.

It's just another stressful day at Africa Felix Juice, a pioneering enterprise on the outskirts of Sierra Leone's capital. Its product may seem mundane – barrels of mango and pineapple juice concentrate – but it represents a crucial breakthrough: The company is the first manufacturer to export from Sierra Leone since the end of its long civil war in 2002.

"We're all now doing some soul-searching on what it means to serve the poor," said Canadian aid worker Richard Schroeder. After 17 years toiling for aid agencies in Asia and elsewhere, Mr. Schroeder is trying a new approach.

He became the president of First Step, a donor-supported profit-making company that created the special industrial zone where the juice factory was born.

"What we're doing is radical – it's far from the traditional realm of an NGO [non-governmental organization]. But donors are sick of NGOs, and NGOs are sick of themselves, and everyone realizes that the key to economic development is business, whether you like it or not."

The strategy seems to be working. Despite the frustrations of doing business here, Africa Felix has found customers in Germany and the Netherlands, allowing it to employ more than 80 local workers at peak season.

"We're defying the stereotype that Africa is hopeless in manufacturing," said Mr. Scotto, an energetic Italian businessman who became the head of Africa Felix when it was founded last year.

"We sell a normal product, but we also sell the story behind it. Nobody has ever heard anything positive about Sierra Leone – just war and chopped-off hands and blood diamonds and hunger. We want to create a positive image for Sierra Leone. Even in the poorest country in the poorest continent, it's possible to make a good product and export it."

In Sierra Leone, about 1,500 farmers are already profiting from the juice factory. On the wall of Mr. Scotto's office, a map is covered with green and red dots that denote suppliers' farms. Some are so remote that farmers must send their fruit in dugout canoes. Yet they're able to earn much higher prices than they would in village markets.

Africa Felix is the first business to set up shop in a new 50-acre industrial zone, created by First Step, where the government has agreed to exempt tenants from duties and taxes on imported equipment.

First Step aims to have 16 manufacturers here within five years, creating up to 2,000 jobs. A fish-processing plant, a gold smelter and a cocoa-processing operation are likely to be next. And First Step recently signed an agreement with a foreign investor to set up another industrial park for a $180-million steel mill. "The success of Africa Felix sold the concept to them," Mr. Schroeder said.

In neighbouring Liberia, another war-torn West African nation, Canadian philanthropists John McCall MacBain and his wife, Marcy, have invested more than $100-million in an innovative experiment in social entrepreneurship: a renewable-energy company that helps both farmers and workers.

Mr. McCall MacBain was once the so-called King of Classifieds, building up a $1.1-billion fortune in buy-and-sell classified ad magazines around the world. He sold his assets to Yellow Pages Group in 2006 (presciently, given the decline in the classifieds industry) and set up the McCall MacBain Foundation and Pamoja Capital to make social investments, especially in Africa.

The MacBains' Liberian company, Buchanan Renewables BV, clears away old, unproductive rubber trees from plantations, and turns them into wood chips that are exported as biomass to Europe. Electricity companies reduce their coal consumption and carbon emissions by burning the product.

Buchanan Renewables employs about 750 Liberians in the port city of Buchanan, but it also helps rubber farmers to plant new trees, boosting their productivity. The company has rejuvenated more than 2,000 hectares of rubber farms so far, while producing up to 500,000 tonnes of wood chips annually.

Its operations are an extraordinary sight. A giant mechanical claw grabs bundles of trees and feeds them into a massive grinding machine. Chips and dust fly as trees are turned into chips in a matter of seconds. The mountains of wood chips are as tall as a four-storey building.

The roads around Buchanan are filled with trucks carrying trees to the grinder. The wood chips are shipped to Europe from the nearby port, which was heavily damaged in the civil war and later revived with the help of a $9-million contribution from Buchanan Renewables to dredge it and remove the wrecked ships.

The port is also the terminus of a railway from the country's biggest iron-ore mine, run by ArcelorMittal, the world's leading steel maker. Huge companies such as Chevron Corp. and the Brazilian conglomerate Odebrecht are active here, yet most people around the city remain poor.

"You have some of the biggest companies in the world rubbing up against communities that haven't seen economic activities for decades," said Matt Jones, country director in Liberia for a Canadian NGO, Building Markets. "But they're sealed off from the communities. They might as well be thousands of miles apart."

To break down those barriers, Mr. Jones and his team serve as matchmakers between Liberian businesses and the multinational firms. Whenever a tender is announced, his team notifies the Liberians by text message, taking advantage of the mobile technology that has become ubiquitous in African business. They're also compiling directories of Liberian suppliers, making it easier for the multinationals to buy locally.

More than 80 per cent of African jobs are created by small and medium businesses, according to World Bank surveys, yet those businesses are neglected by traditional aid agencies. Building Markets, headed by former Canadian diplomat Scott Gilmore, is among the new organizations trying to help African entrepreneurs.

"The international aid industry has been almost entirely focused on governance and government," said Edward Rees, a senior adviser at Building Markets. "But democracy and governance are pretty useless in a context of high unemployment. There's no point in creating a perfect democracy in a dysfunctional economy, because the democracy will always fail."

Back at the juice factory, Claudio Scotto is still facing headaches. There are shortages of electricity, so he remains dependent on his diesel generator. Suppliers are insisting on cash payments. Trucks crossing borders by land are forced to pay bribes, while goods heading to Sierra Leone from other African countries are often sent on traditional shipping routes via Europe.

When he took four drums of juice to a potential customer in Mali recently, Mr. Scotto suffered humiliating harassment from customs officials. "I was treated extremely badly," he said. "They seized my vehicle and treated me as if I was a drug dealer."

He's a patient man, however, and he is convinced that his factory will grow. "There's no point in complaining that Africa is poor if you're not trying anything." 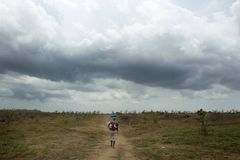