As Qatar rushes to prepare for the 2022 World Cup, the tiny Gulf Arab state is spending billions to build stadiums, roads, bridges, apartments and hotels on a patch of desert jutting out into the Gulf's waters.

Like cities hosting the Olympic Games, which face the risk of being left with unused venues after the athletes and spectators leave, Qatar is betting that it can accelerate its transformation as a financial and tourism destination to absorb the extra capacity.

It will have to compete with the emirate of Dubai, just up the coast, which also created a glittering seaside desert city on the "build-and-they-will-come" model over the past decade – only to see a property and asset bubble crash in 2008 and 2009, leaving it with hundreds of empty buildings.

"They have to plan what to with it after the event," said Ziad Makhzoumi, chief financial officer at Dubai builder Arabtec. "They are trying to design what is practical for later."

On the plus side, Dubai is on the mend, albeit slowly, and both destinations are wealthy enough to invest for the long term. Both are also reachable from nearly every major city on Earth via long-haul flights, making them a natural global hub for trade, finance and tourism.

Goldman Sachs estimates that Qatar, flush with cash, will spend around $65-billion (U.S.) to prepare for the World Cup, when some 500,000 fans will descend on a country of just 1.7 million people, of whom 80 per cent are expatriates.

Dozens of cranes line the dusty expanse stretching across Doha's seaside corniche walkway, far fewer than the hundreds that dotted Dubai's skyline at the peak of its construction boom in 2008.

Doha now boasts architectural designs rivalling that of its flamboyant neighbour, such as the al-Bidda Tower, a 215-metre-high twisting commercial building. Like Dubai, it is becoming an architect's playground, thanks to clients with deep pockets and bold ambitions who helped build grand edifices in Dubai such as Burj Khalifa, the world's tallest building.

"They [Qatar]have to differentiate between building infrastructure useful for a city and building white elephants, as we saw in Dubai," said Majed Azzam, senior real estate analyst at Dubai-based research firm AlembicHC. "At the end of the day, the World Cup and the expansion around it is something Qatar is doing for its pride, to put the country on the map.

"Definitely there will be excesses."

Arabtec, one of Burj Khalifa's builders, is also one of several Gulf Arab contractors who are looking to snap up contracts ahead of the competition – more than a decade away – as Qatar builds a $36-billion rail network, an $11-billion new airport and a $5.5-billion new deep water seaport over the next five years.

Billions more will be spent on 12 air-conditioned soccer stadiums, boosting the need for additional power capacity in a country where temperatures can soar above 50 degrees Celsius in the summer, when the World Cup is usually held.

Qatar's expenditure on public projects has more than tripled over the last five years to 58-billion riyals ($16-billion) which the OPEC member plans to spend in the current business year from April.

Another Dubai-based construction firm, Al Habtoor Leighton, an affiliate of Australia's Leighton Holdings, may pitch for tenders on tunnelling, track work and stations for the $35-billion railway and metro project.

The rail network will be one of the first in the region. Hoping to connect their urban centres more efficiently, an ambitious billion-dollar rail system is now being planned to connect the six Gulf Co-operation Council countries: Bahrain, Kuwait, Oman, Saudi Arabia, Qatar and the United Arab Emirates.

Qatar is likely to try to claim a share of the millions of tourists flocking to neighbouring Dubai, which markets itself as a tourist heaven in the region and has attracted more than 1.8 million visitors in just the first quarter of this year.

Qatar had 9,574 rooms available at the end of 2010 and the number of hotels is expected to increase ten-fold over the next decade, likely leading to hotel oversupply, according to Shakeel Sarwar, head of asset management at Securities & Investment Co. in Bahrain.

"Based on the discussion we had with some real estate companies, a portion of hotel supply would be designed in such a way that they can be used later as serviced apartments once the event is finished," he said.

The completion of a $3-billion, 40-km causeway linking Qatar to Bahrain ahead of the World Cup would also make it easier to commute between Manama and Doha, enabling tourists to use facilities in Bahrain, he added.

The Gulf state is also planning to use a cruise ship as accommodation for the event.

"The government agencies, property developers and the entire business sector is aware that the tournament is an investment," said Ali bin Abdulatif al-Misnad, treasurer at the Qatar Chamber of Commerce and Industry.

Another potential opportunity is to turn Doha into a meeting and conference hub, an ambition also held by Dubai.

Qatar Tourism Authority is focusing on promoting Qatar as a destination for meetings, conventions and exhibitions in the Gulf Arab region and last year launched its "48 Hours in Qatar" campaign to encourage visitors to extend their stays.

Looking to capture the rush of top executives and corporates expected to travel to Doha ahead of the World Cup, St. Regis Doha is planning a luxury hotel with 336 rooms that boast a personal butler service for each guest.

"We are not just looking at the month of the tournament," said Tareq Derbas, general manager of St. Regis Doha.

"What is more important is what comes before and after the World Cup. We will definitely be busy before … hopefully we will be busy after it too." 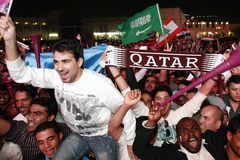