Saudi Arabia plans to sell a stake "of less than 5 per cent" in the parent of its state-owned oil company, the kingdom's deputy crown prince said, revealing details of a listing that could make it the world's biggest publicly traded firm.

In an interview in Riyadh, Prince Mohammed bin Salman said his advisers were working on a plan to offer shares in all of Saudi Arabian Oil Co. rather than just some of its refining subsidiaries. Saudi Aramco, as the world's biggest oil exporter is known, would be listed on the domestic stock exchange as early as 2017 and no later than 2018, said the prince – the king 's son and second in line to the throne.

"The mother company will be offered to the public as well as a number of its subsidiaries," the prince, who heads Aramco's supreme council, told Bloomberg in a five-hour conversation.

By committing to sell shares in the parent bin Salman will give investors a stake in the world's biggest oil fields and expose the assets that underpin the kingdom's entire economy to unprecedented scrutiny. Aramco controls about 10 times the oil reserves held by Exxon Mobil Corp. and based on a conservative valuation of $10 a barrel, the company could be worth more than $2.5-trillion.

Saudi Aramco's listing is the centerpiece of a broader economic transformation that the kingdom is planning in response to a global oil glut that has driven down crude prices and slashed revenue from its most valuable export. Aramco pumps more than 10 million barrels a day of crude, exceeding the domestic output of all U.S. oil companies combined.

The prince's plans also call for Aramco to become the world's largest oil refiner, overtaking Exxon, mainly by adding capacity in Asia, as well as pushing further into petrochemical production.

"We will also announce Aramco's new strategy and will transform it from an oil and gas company to an energy-industrial company," he said.

The plan calls for listing a small stake on the Tadawul, as the Arab world's largest bourse is known, the prince said. The size of the stake hasn't yet been decided, but he said: "We're talking about less than 5 per cent."

The rest of Aramco would still be owned by the government but controlled through a sovereign wealth fund, which as a result of the share sale would become the world's richest.

"Undoubtedly, it will be larger than the largest fund on earth. We will surpass $2-trillion," the prince said.

In January, Aramco said officials were studying two main routes for an initial public offering: an IPO of its parent and the listing of a bundle of its oil-refining subsidiaries. The sale of shares in the parent company – the route now signaled by the kingdom's deputy crown prince – would open the door for private investors to own a piece of the world's largest oil fields.

Saudi Aramco traces its origins back to the oil shortages of World War I, when U.S. companies explored the Middle East for hydrocarbons. The company, which was owned by what today are Exxon and Chevron Corp. until its full nationalization in 1980, is closely linked with the emergence of one of the most powerful geopolitical forces of the past half century: the modern petro-state.

The IPO, together with the re-launch of the sovereign wealth fund, are the cornerstones of a plan put forward by the young deputy crown prince that could become one of the biggest economic transformations since the fall of the Berlin Wall and the collapse of the Soviet Union more than two decades ago.

"Aramco is now the biggest company in the world and it has the capability of controlling the shape of energy in the future, and we want to venture into that from today," the prince said.

Despite the prince's bullishness, foreign investors rarely value state-owned oil companies as dispassionately as their crude-reserve numbers suggest – or as government officials might hope. State-controlled OAO Rosneft, for example, is the largest oil producer in Russia and one of the world's largest. It pumps 5 million barrels a day – far more than Chevron – yet its market capitalization is just $50-billion, a fraction of Chevron's $180-billion.

The Saudi deputy crown prince said Aramco will continue to grow through investments in the refining industry in countries including China, India, South Africa and Indonesia. "We're also targeting the U.S. market including the recent deal we've made with Shell," he said.

The Saudi company and Royal Dutch Shell Plc have agreed to split their oil refining joint-venture in the Americas, with Aramco taking sole ownership of the largest oil refinery in the U.S., located in Texas.

Saudi Aramco has a refining capacity of around 5.4 million barrels a day through its ownership of domestic and foreign joint-ventures, and it's aiming to almost double it to between 8 million and 10 million, spending billions in new plants in Asia. The new overseas refineries will guarantee demand for its oil as Riyadh usually signs contracts that require the plants to be fed with Saudi crude.

He pointed to two other expansion areas for Aramco: petrochemicals and engineering. "We want to develop the petrochemicals," he said. "We could create a huge construction company under Aramco that will also be offered to the public and that services projects other than Aramco's projects in Saudi." 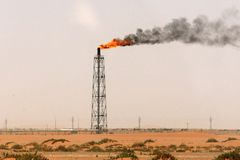 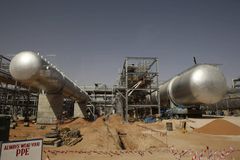