Say you have a technology manufacturing plant in Eastern Europe and the government starts to take a dislike to foreign enterprises. Outright expropriation would cause an international stir, so officials decide on a less obvious strategy to make you uncomfortable. They relocate the highway that connects you to the rest of the world.

The result? Your cost of doing business dramatically increases in a part of the world you originally located in to lower your costs.

"Creeping expropriation" was how a Canadian company described it to Aon PLC, a Britain-based concern that helps businesses protect themselves against political risk and other uncertainties in the global marketplace.

From nationalism in South America to social unrest in the Middle East, political risk is increasingly being factored in to companies' risk-management strategies. It ranks No. 10 on Aon's list of most worrying risks compiled from a poll of 1,415 companies worldwide in a variety of sectors. In the previous poll, it ranked No. 14.

The survey, conducted in the fourth quarter of 2012, found that 30 per cent of respondents had suffered an economic loss due to political factors in the previous 12 months.

In addition to expropriation of assets, political risk includes such things as import/export embargoes, withdrawal of licenses, bans on currency conversion and non-payment or arbitrary contract termination by a sovereign entity.

Aon markets insurance products that deal with the risks of a truly globalized economy.

"Most of the traditional property and casualty policies were written 100 years ago when people were worried about their boilers blowing up," says Garry McDonell, the company's Toronto-based national director of global risk consulting. "That is not a risk that most of our clients face today."

Aon helps clients rank and quantify their risks and assess which are insurable. Where insurance is not available or too costly, it can help companies set up their own insurance funds to cover calamities. Some companies choose to include a risk premium in the price of their products as a cushion should trouble arise.

The issue is becoming more important as companies move beyond import/export and consider starting up or expanding in other countries. In 2012, direct foreign investment by Canadian firms was worth $711.6-billion. Large companies in financial services, energy, mining and infrastructure are the main players, but smaller firms in all sectors are increasingly looking to expand globally as well.

"Companies today should look at the risks of investing in markets they're not used to operating in," says Albert van Eeden, EDC's director of political risk insurance. "Then there are the companies that might have been selling in a certain country for a while, but never reached a critical mass and they want to put people and resources on the ground and register as a subsidiary or an affiliate, so they're taking it to the next level, and that comes with additional risks."

EDC offers traditional political risk insurance covering political violence and expropriation, as well as currency conversion and transfer risks. It also offers sovereign payment risk insurance, which protects against non-payment of goods and services by foreign governments. It also insures two types of lending: money lent directly to sovereign entities, and that lent in support of Canadian exports. The latter covers cases where obligations cannot be met due to political events.

The EDC now provides political risk insurance of $1.5-billion against Canadian assets in other countries. That part of its operations grew by 20 per cent last year.

Premiums range from less than 0.5 per cent per year to as high as 3.5 per cent of the insured amount. The price depends on a risk assessment using a proprietary method that takes into account global political situations and the type of transaction.

EDC does not disclose names of its clients, but uses as an example a company shipping expensive machinery to 25 countries to be stored in warehouses until sold or delivered. Political risk coverage was added in addition to standard property and casualty policies to provide shareholders and lenders with added confidence.

"The world is full of news of political upheavals," Mr. Van Eeden says. "The Arab Spring saw many examples of equipment being destroyed because of violence. There have been cases of expropriation, and cases in South America where governments have changed their exchange-control regulations and companies were unable to get their money out." 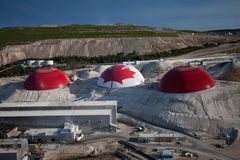