On a recent ski trip to the Dolomite mountains in Italy's far north, near the Austrian frontier, I noticed that the vast array of chairlifts, gondolas, snow-making equipment and snow-grooming machines came mostly from one company – Leitner Group. In effect, it provided all the technology to keep the skiers skiing.

Leitner is no household name, but the Italian company is a biggie in the mountain sports industry. It's the perfect example of a relatively small, private European company that has used decades of innovation, small acquisitions, a conservative financial structure and sheer perseverance to take a commanding share of a niche international market.

Leitner, formed in the late 1800s, got into the snow-grooming business in the past decade, when it bought the old snow-machine division of Bombardier Recreational Products. It is now using its people-moving skills to expand into elevated urban transportation systems.

Italy and Germany are full of such companies. In Germany, they are known as mittelstand – small and medium-sized family companies that cherish their independence, have strong regional ties, a global outlook and consider investment bankers useless. They are one of the main reasons why Germany and Italy still have a relatively big manufacturing base (although, obviously, one that has suffered through the long European recession) and much of the rest of Europe does not.

Manufacturing, or lack thereof, is back in the news this week because Britain, once the world's workshop, seems on the verge of losing yet another industry. India's Tata Group is looking for buyers for its ragged, money-losing fleet of British steel plants. Unless buyers can be found in a hurry, they may close, putting some 15,000 employees out of work. Earlier this week, British Prime Minister David Cameron ruled out nationalizing the biggest Tata plant, the Port Talbot steelworks in Wales, in spite of cries from opposition MPs to do so.

The probable closing of Port Talbot signals that Britain lacks a viable industrial strategy. Since the 2008 financial crisis, when the government had to bail out half of the banking system, it has been looking for ways to balance the economy, which meant relying less on banks and more on manufacturing. While Britain retains some high-value metalworks – Airbus's British arm makes most of the wings for its passenger jets, for instance – there is no doubt the rebalancing effort has failed. Britain's deindustrialization process, which surged in the Maggie Thatcher era, continues apace, to the point that the country may evolve into little more than an offshore banking centre, the Cayman Islands of the North Sea.

How did Germany and, to a lesser extent, Italy, manage to keep manufacturing alive while alleged economic powerhouses such as France and Britain did not? Britain wants to know; so does Canada, which has also been experiencing a punching of gaping holes in its manufacturing base and is struggling to rebalance its economy as low oil prices transform the once-mighty oil sands from jobs creator to jobs destroyer.

To be sure, German manufacturing has taken its share of blows as China moved up the manufacturing value chain, but it's still a wonder by European and North American standards. In Germany, manufacturing is worth 23 per cent of gross domestic product compared with 11 per cent in Britain, according to the World Bank. In Italy, the figure is 15 per cent and it's 12 per cent in the United States (the World Bank had no recent figure for Canada).

German engineering and technology firms, among them Siemens, BMW, Daimler, Volkswagen, Bosch, BASF, Continental and ThyssenKrupp, are big-time global players. Many of the mittelstand are global players, too, even if they might employ only a few hundred or a few thousand people. This group would include Miele, the maker of high-end kitchen appliances, and Herrenknecht, the world leader in tunnelling equipment.

Germany has no stated strategic vision, but there is no doubt it exists. A big part of the plan is a focus on vocational training, which combines the classroom with work experience. Germany's vocational schools, called berufsschule, are embedded in the industrial culture; more than 350 professions are part of the system. German industry also exploits the Fraunhofer Institutes, which are engaged in applied science and form public-private partnerships to help deliver innovations to the marketplace. The 67 institutes specialize in everything from cell therapy to wind energy.

The German government has been adept at steering industry into growth areas, notably renewable energy. Through energy subsidies such as feed-in tariffs and tax relief, the government has ensured that Germany is the European leader in green technology by a long shot. Germany's goal is to generate 20 per cent of its electricity from renewable sources, such as offshore wind farms, by 2020.

Finally, German companies, especially the mittelstand, have formed tight relations with their banks, which provide most of their funding. Joining the stock market is rarely their first choice. The upshot is that these companies are not trapped by the cult of shareholder value, which places short-term profits ahead of long-term, sustainable growth. Patient investment has worked wonders for Germany industry. For any country undergoing deindustrialization, the German model is worth looking at. The trouble is, it might be too late for countries such as Britain and Canada to reverse their industrial slide even if they do smarten up on the industrial strategy front.

Germany recharged: EU powerhouse goes all in on alternative energy
May 14, 2018 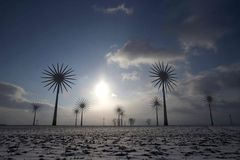