Everything looked normal in the heart of Athens on Monday afternoon, the day after the shock announcement that the Greek banks would close their doors and six days before the national referendum that might determine whether Greece stays in the euro zone.

There were no mass protests in Syntagma Square, the enormous open space in front of the parliament buildings that was often set alight during the anti-austerity protests and riots at the height of the debt crisis three or four years ago.

The long-line ups seen Sunday at the ATM machines were largely gone. When the ATMs re-opened on Monday, at midday, withdrawals were limited to €60. Tourists filled the cafes and restaurants; anyone equipped with foreign cash cards were exempt from the withdrawal limit.

Under the surface, it was a different story. As European Commission president Jean-Claude Juncker and other European officials urged Greeks to vote Yes in the referendum to new bailout terms, Greek businesses big and small were growing fearful of what lies ahead. Would the banks really reopen after a week, as the government insisted they would? Would Greece's probable default on its scheduled €1.6-billion debt payment to the International Monetary Fund on Tuesday trigger other defaults? Is the referendum on accepting or rejecting the creditors' bailout terms really a vote on accepting or rejecting the euro?

Just off Syntagma Square, in an Italian-style café called Brigante, Costas Garyfallou, the café's Greek-Australian owner, said he felt Greece was launching itself into the great unknown. "We're coming up to D-Day," he said, referring to the July 5 referendum.

Mr. Garyfallou's café opened six years ago. Since then, he has had a front-row seat to three election campaigns, endless street protests and riots, some of them violent, and a near economic collapse. His business survived them all. But his confidence is ebbing.

His flow of customers was already down on Monday, as they conserved cash. The real blow to his business could come if Greece votes No to the bailout proposal on Monday, potentially putting the country on the fast track out of the euro zone (some economists put the chances of a Greek exit at 50/50). If that were to happen, Greece would have to reprint the drachma, which would be instantly devalued against the euro by perhaps 50 per cent. Prices for all imported goods would soar, and Greece is a heavy importer of everything from food and fuel to cars and computers.

"Look around," Mr. Garyfallou says, pointing to the foreign beers, wine, coffee, soft drinks, even bottled water, in his shop. "It all comes from Italy, other countries. Since we import so much stuff in this country, I'm worried [the use of the drachma] will affect my business."

He won't say how he will vote in the referendum, though he fears the average person will go into the polling booth uninformed; one week is a short time to get up to speed on such a weighty issue as the direction of the country and what currency it might use. "We are going to vote blindly," he says. "My point is we haven't been given all the facts – any facts. Am I getting played once again?"

Greece's bigger businesses, the ones that import and export, obviously love the convenience of the euro, which can be used in 19 European Union countries, has worldwide recognition and clout and cannot be devalued by national governments.

The bank shut-down and the capital controls – the limits on cash withdrawals and money transfers – have yet to hit the bigger business but that could change soon.

Georges Ghonos, managing director in Athens for southeastern Europe of McCain Hellas, owned by Canadian frozen French fry empire McCain Foods, says he's worried that his wholesalers – the small Greek companies that buy McCain products and distribute them – will run into trouble as cash is hoarded. If the restaurants and supermarkets don't pay the wholesalers, McCain itself won't get paid. Some of the wholesalers, he said, could shut down, creating a "domino effect" along the supply chain.

Some Greeks aren't bothered by the bank shutdown and limits on ATM withdrawals. George Argiriadis, a 58-year-old Athens taxi driver and former ship engineer, says the recession ensures he no longer makes a lot of money. He lives day to day from his meagre cash stash, which is usually kept in his pocket. "No cash machine, no problem," he says. "I have no money to take out."

No happy ending in sight for the Greek tragedy
June 26, 2015 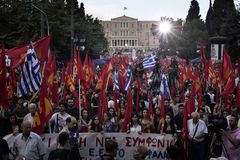 Greek debt crisis could shape the future of the euro as a currency
June 28, 2015 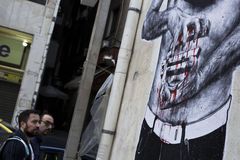