What is the real answer to the Wolf of Wall Street challenge: Sell me this pen?

Anyone who's seen Martin Scorsese's The Wolf of Wall Street knows the scene. In the last few moments of the film, Leonardo DiCaprio, portraying Jordan Belfort – the 1990s penny stock broker, who went to prison on charges of fraud and stock market manipulation for orchestrating a massive pump and dump scheme at his New York firm Stratton Oakmont – asks a room full of salesmen at a seminar to sell him a pen. Mr. DiCaprio hands a pen to one salesman, who begins describing it: "It's an amazing pen..." Not satisfied, Mr. DiCaprio takes the pen from the salesman, hands it to another and repeats the challenge. Again, the salesman describes the pen's finer features and Mr. DiCaprio moves on.

(Read Grant Robertson's interview with Jordan Belfort: The real-life 'Wolf of Wall Street' is an unlikely advocate of ethics)

So what is the correct response? Earlier in the film, Mr. Belfort is portrayed giving the same challenge to friends (clip contains profanity) he has hired to work at the startup firm. Sitting in a diner, one man takes the pen and tells Mr. Dicaprio, as Mr. Belfort, to write his name down. Having just handed over his pen, Mr. DiCaprio, replies that he doesn't have a pen. Exactly, the man replies, "Supply and demand."

But that's actually not the correct response, says the real-life Mr. Belfort in an interview. The actual answer to "Sell me this pen," doesn't show up in the film. Mr. Belfort, who is now riding the movie's popularity and is active on the speaking and seminar circuit as he tries to pay down the $110-million (U.S.) fine he received from the U.S. government after being indicted in 1998 for securities fraud, explains the correct response to "Sell me this pen:"

"It's sort of a trick question. Because when you say to a salesman, 'Sell me this pen,' you might find some will say to you, 'This is a great pen, this pen writes upside down. It defies gravity, this pen is the cheapest pen on earth, this pen will never run out.' They'll say all the reasons the pen is good, they'll start telling you the features, and the better ones will give you the benefits too. But that's not what the real answer is.

"The real answer is, before I'm even going to sell a pen to anybody, I need to know about the person, I want to know what their needs are, what kind of pens do they use, do they use a pen? How often do they use a pen? Do they like to use a pen formally, to sign things, or use it in their everyday life? The first idea is that when you say 'Sell me this pen,' I want to hear [the salesman] ask me a question. 'So tell me, how long have you been in the market for a pen?' I want them to turn it around on me and start asking me questions to identify my needs, what I'm looking for. And if you do that, people don't know what to do. Next thing, he is answering, and now I'm controlling the conversation, finding out exactly what he needs.

"Once I have that, I say, 'You know, Bill, based on what you've just said to me, the pen I have here is the perfect fit. Let me tell you what it's about…' Then you can tell them about what you have, because you're filling a need. Most average or newbie salespeople think that they're supposed to sell you the pen, when a really seasoned salesperson will actually turn it into a qualifying session to find out what you need. That's the truth of it. It's like trying to sell someone a house and you don't know if they're in the market for a house, what kind of house they want, how many kids – so how can you sell someone a house? That's the point."

The real-life ‘Wolf of Wall Street’ is an unlikely advocate of ethics
April 13, 2014 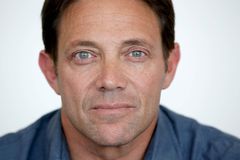