The new U.S. administration's desire to reopen the North American free-trade agreement could give Canada an opportunity to gain market access in a key source of export growth that was barely an afterthought when the trilateral trade deal was drawn up a quarter-century ago: The services sector.

Trade in services, which has dominated Canada's export growth in the past decade, looks likely to be on the table when U.S. President Donald Trump makes good on his election pledge to renegotiate the long-standing Canada-U.S.-Mexico trade pact. It's certainly on the radar for U.S. negotiators; some experts argue that it should be Canada's priority.

"It's an opportunity," said economist Glen Hodgson, senior fellow at the Conference Board of Canada. "We have to look after our own interests."

Indeed, Mr. Trump's formal rejection last week of the Trans-Pacific Partnership, a proposed 12-country trade agreement that included Canada and the United States and was heavily tilted toward services, investment and digital commerce, may well have set the stage for pursuing a similar path in a renewed NAFTA.

While Mr. Trump's main motivation for seeking a renegotiated NAFTA appears to be to level the manufacturing playing field with Mexico, Mr. Trump's nominee for treasury secretary, Steven Mnuchin, said the U.S. sees the work already done on the TPP as a "starting point" for a new round of NAFTA talks.

"I think it's the likely step from the U.S. perspective," said University of Ottawa professor Michael Geist, who specializes in e-commerce law – a major feature of the TPP. He noted that despite Mr. Trump's rejection of the TPP, the trade deal was largely driven by U.S. objectives, as the most powerful economy in the talks. The final deal contains many provisions that corporate America sought from its trading partners, and will want to see again at the NAFTA level.

The key elements of that would include provisions for duty-free electronic transmissions (goods and services in the form of data), increased skilled-labour mobility among service-focused professions, and minimum labour standards, including minimum-wage requirements.

"It's likely to be TPP-plus," he said of the NAFTA renegotiation.

Others argue that Canada might prefer to model its negotiations along the lines of the Comprehensive Economic and Trade Agreement (CETA), its trade pact with the European Union signed last fall. That deal also had significant services-trade components, addressing labour mobility, intellectual-property rights and e-commerce.

There's good reason for all this focus on services in Canada's trade negotiations in recent years. Services not only dominate the Canadian economy, but they have become Canada's key source of economic growth.

Research also suggests that Canada has ample room to grow its services presence in the U.S. market. Despite a 30-per-cent increase in Canada's services exports to the United States from 2010 to 2015 (the most recent full year of data available), a recent paper from the Institute for Research on Public Policy concludes that Canada is "under-trading" services to the United States, based on the size of the two countries' markets, their close proximity, and the compatibility of Canada's service expertise with the U.S. market's needs. In 2015, Canada ran a $12-billion services-trade deficit with the United States.

Canada's main motivation for joining TPP in the first place was to make sure it didn't miss out on access to the U.S. market that the deal would afford, particularly in services areas, which are becoming increasingly open to cross-border trade due to digital advances. With the U.S. pulling out of the TPP, Canada should now get the chance to pursue that access on the NAFTA level.

"NAFTA is an old agreement. It was really about removal of tariffs and a dispute-settlement mechanism," Mr. Hodgson said. He said a services focus in this new round of NAFTA negotiations "would modernize NAFTA, and the trade relationship," to reflect technological progress in trade that didn't exist when NAFTA was negotiated.

Indeed, the key to a NAFTA for the digital age may be e-commerce provisions. The combination of reducing barriers to the movement of digitally delivered goods and services, and protection of intellectual-property rights and other digital security concerns, has been established by the TPP and (to a lesser extent) CETA as a vital new direction in a global trading system that has struggled in the post-financial-crisis era. Where growth in goods trade has stalled, digital technology has opened up a whole range of new opportunities – and thorny questions – for expanding global trade in services.

"These are issues that are on the threshold now," New York University professor Robert Howse said, an expert in international trade law.

Canada will also be eager to secure market access in particular for financial services, an area where it has particularly thrived in global markets in recent years and a recognized strong suit for the country – a "comparative advantage," in economists' parlance. Both the TPP and CETA contain provisions giving Canadian finance and insurance companies favourable access.

Experts also agree that a services-focused round of NAFTA would have to secure the free movement of skilled professionals across borders, at least temporarily, if it is going to fully capitalize on the potential for services trade, as the services sector is highly dependent on human capital.

"If you're going to talk about services, you have to include the movement of people," Mr. Hodgson said.

However, the labour-mobility question is sure to be a sticky one with the Trump administration, given its vocal objection to the flow of undocumented Mexican workers across its southern border – and its intention to build a physical wall along that border to keep Mexican migrants out.

Indeed, it's unclear how far Canada would be able to push its own trade agenda in this U.S.-instigated reopening of NAFTA. Stephen Tapp, research director of the International Trade and Global Commerce research program at the Institute for Research on Public Policy, wonders if Canada can expect to make serious advances into the services area in a reopened NAFTA, given the aggressive, "America first" tone that Mr. Trump's administration looks determined to bring to the table.

"In my view, this is certainly possible, but is likely a best-case scenario, and a very optimistic view given the anti-trade rhetoric what we have seen so far from Trump," Mr. Tapp said. "He seems much more focused on thickening borders and building walls than improving trade rules to facilitate cross-border commerce."

"[NAFTA's renegotiation] is going to be a very complex undertaking – if it's not undermined by the kind of verbal gunboat diplomacy that Trump is engaging in with Mexico," Mr. Howse said.

In that scenario, experts said, Canada's negotiators may find themselves simply playing defence – trying to protect the U.S. market access they have now without having to trade too much away to keep it.

"This will be much more about preservation," Mr. Geist said. 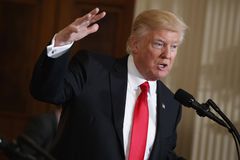