Cast your mind ahead five years.

Most people probably can't say with certainty what their lives will be like in 2019.

In a worst-case scenario, it could take that long to put the much-hyped Canada-European Union free trade deal into place.

Even if all goes well, implementation won't likely happen before early 2016.

In spite of repeated claims of "a historic win" from the Harper government and dozens of press releases touting the agreement's wondrous benefits, a final deal remains elusive.

That's unfortunate because Canada could use a bit of door-opening for its exports right about now. The sectors that stand to benefit most from the deal, including manufacturing and agriculture, have seen their exports slump badly in recent years.

Here we are, eight months since Canada and the EU reached an "agreement in principle," and still nothing. The two sides are struggling to complete the technical negotiations required to make it all official. Canadian officials are hoping a document will be ready for Prime Minister Stephen Harper to sign when he's in Brussels June 4-5 for the meeting of the Group of Seven industrialized countries.

Completion of negotiations starts the clock ticking on a new process that includes finalization of a legal text, translation into two dozen languages, and approval by the provinces, the European Commission and the European Parliament. Some elements, including changes to labour laws and legal sanctions, may also require ratification by 28 EU member states – a process that could take years.

"We are still a long way from entry into force," Ross Hornby, Canadian ambassador to the EU from 2006-11 and now vice-president of government affairs at GE Canada, acknowledged in a recent C.D. Howe Institute report.

Mr. Hornby figures it will be two to three years before the full agreement becomes a reality.

Should anything serious go wrong along the way, even that timetable could prove optimistic. EU negotiators have suggested that five years is not beyond the realm of possibility if member states object to parts of the deal.

"The longer this process goes along without closure, the more it's held hostage to political circumstances," warned Lawrence Herman, a Toronto-based trade lawyer.

Matthew Kronby, Canada's former lead lawyer for the European negotiations and now a partner at law firm Bennett Jones in Toronto, said the long road to implementation is largely a European issue. But he said the two sides could agree to provisionally implement key sections sooner, including any tariff reductions.

Experts and government officials alike insist there will be a final deal. And when it's done, it will be positive for Canadian exporters – lowering tariffs across the board, and also breaking down barriers in services, regulations, labour mobility, investment and selling to governments.

"This will not make Canadian exporters more aggressive," Mr. Kronby pointed out. "But it will give them opportunities."

It isn't a panacea for the Canadian economy, which has already endured a lost export decade since the dollar began its ascent to par with the U.S. dollar in the early 2000s.

Canadian exports grew 4.2 per cent between 2000 and 2012. That's less than half the 9.1-per-cent pace of global export growth over that period.

Most disturbingly, Canada is losing market share in the United States – the destination of more than 70 per cent of our exports. A recent study by the Bank of Canada determined that Canada's share of non-energy imports by the U.S. fell to 11.4 per cent in 2013 from more than 17 per cent in 2000.

And the share of Canada's exports destined for the fastest-growing parts of the world, including China, have stagnated. That means Canada is not keeping up with where trade flows are moving.

A lesson in all of this is that trade agreements are rarely the answer to today's problems because of the long lead-time to complete deals. They may well be the answer to tomorrow's challenges.

In the meantime, Ottawa would be wise to boost its investments in often-neglected trade promotion and diplomacy, as the Canadian Chamber of Commerce urged in a recent report.

The government could also work harder to overhaul policies on the home front that inhibit trade and investment, including internal barriers and telecom foreign ownership rules.

Can this man coax Canada’s reluctant exporters to diversify?
May 23, 2014 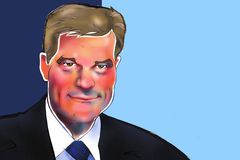