It's a buyer's market for the massive vessels as cash-strapped shipowners reduce their fleets amid a plunge in demand and prices for coal and other industrial commodities.

Capesize ships just five years old are selling for $22-million (U.S.) compared with $180-million just before the financial crisis of 2008, according to London-based Vessels Value, which tracks the shipping market.

"We're right down at the bottom," Craig Jallal, a senior data editor at Vessels Value, said by phone.

Since September, 263 second-hand bulk commodity ships worth a total $3-billion have been sold. Owners facing near-record low charter rates are being pressed by their lenders to liquidate a fleet that is too large for the market, Mr. Jallal said. It's a last-ditch move they take after seeking loan repayment holidays or waivers, which have been harder to negotiate amid a tight finance market.

Greeks have been the biggest buyers on the second-hand market, spending $1.3-billion (U.S.) since September on 95 bulkers. The purchases cement the country's status as home to some of the world's biggest – and canniest – shipowners.

"Generations of Greek shipowners have operated under these principles," Mr. Jallal said. "They know it's cyclical. They know it's driven by what's happening in the world economy. They wait for a low point like this, go in, buy vessels. They [operate] them for a short while in the spot market, wait for the cycle to swing back up and sell them."

Chinese and British shipowners are the next biggest buyers, jumping on 36 and 12 ships, respectively, according to Vessels Value.

A capesize ship, one of the largest dry bulkers, is so named because it is too big to sail through the Panama canal and must travel from one ocean to another via the Cape of Good Hope or Cape Horn. There are about 1,700 capesize ships, accounting for 15 per cent of world's fleet of bulkers. They cost about $35-million new and can easily sail for 40 years, but are being scrapped, sold or taken out of service far earlier, analysts say. These attempts to shrink overcapacity have reduced the average age of the capesize fleet to six years old, according to Vessels Value.

The world's shipowners that bet that Chinese demand for industrial commodities would continue to grow expanded their fleets. But as China gears back, the flow of ore, coal and other raw materials has slowed as steel prices plunged. China and other countries have reduced their consumption of thermal coal and turned to cleaner energy sources.

Ship buyers facing low rates and hungry competitors have delayed deliveries of half the 290 capesize bulk ships due to be delivered in the first three months of 2016. Twenty-four orders have been cancelled and 55 new ships have been delivered but not put in service, Vessels Value says.

Companies operating in the oversupplied shipping market face four choices, all of them money-losers: They can continue to hire out their vessels at rates that do not cover the operating expenses; they can pay to tie up their unneeded ships and wait for demand to return; they can sell their ships into the lousy used market; or, they can sell the ship for scrap even as prices paid by ship-breakers in Bangladesh, India and Pakistan are low, reflecting a glut in scrap metal.

A near record number of vessels have sailed into scrap yards.

Six or seven of these belonged to CSL Group, the Montreal-based shipping company that operates around the world. "There may be one more in the next year or so," said Rod Jones, CSL's chief executive officer, "but for the most part we try to run a balanced fleet. We've got a pool of contracts and cargoes and we've got a fleet of ships, and our job is to manage that portfolio as efficiently as possible."

The company has added 11 new ships, and may scrap one more from a fleet of more than 50 in Asia, Australia, North America and Europe, Mr. Jones said in a recent interview. "We have been impacted over the last few years as many of our customers have gotten into trouble, and have had either levelling off or declining businesses, [so] we've had to right-size our fleet."

But even as shipping companies scramble to pare back their fleets, China has found new ways to rock the markets. The country's state-owned shipowners have ordered 30 massive new dry bulk ships to be delivered beginning in 2018. The ships, known as valemax, have capacity for 400,000 tonnes of iron ore or more than twice that of a capesize vessel.

"To put it in perspective, this order alone will result in a 3-per-cent increase in the capesize/valemax fleet, all while spot rates and asset values are at all-time lows," said Noah Parquette, an equities analyst with JPMorgan.

"We believe the order was likely driven by both a desire by the Chinese to have more control over iron ore freight rates, and domestic employment concerns. In our view, this development is a striking example of our biggest fear: that industrial overcapacity in China leads to persistent oversupply and rate deflation in dry bulk shipping."

Editor's note: An earlier version of this story incorrectly said a capesize cargo ship is too big to sail through the Suez Canal. Shipping industry navigating ‘one of the worst times in its history’ Subscriber content
May 16, 2018 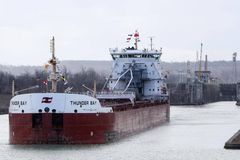 'Bloodbath' for shipping industry as rates plunge to new depths
May 16, 2018 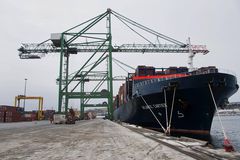 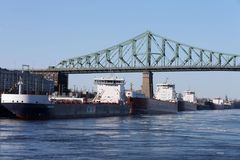