Metro Inc. ended its 2014 financial year on a high note as the supermarket chain 's sales growth surpassed rival Loblaw for the first time in nearly two years, in part due to a spike in meat prices.

Montreal-based Metro said it has been able to pass along to consumers most of the 10-per-cent increase in meat costs so far and will look for further hikes in the coming months.

"At some point it's a good thing that customers have to adjust to a new price reality," CEO Eric La Fleche he said Wednesday during a conference call on the company's fourth-quarter results.

He said prices increases for meat and produce should level off by about March, while prices for packaged and canned goods have been flat and those for bakery goods have decreased.

While the grocery sector has benefited from the moderation in square footage growth, Metro's same-store sales growth beat rival Loblaw's 2.6-per-cent gain for the first time since the first quarter of 2013.

That helped Metro to beat analyst expectations as net profit grew 45 per cent compared with a year ago, when it faced one-time restructuring costs.

Analysts had expected Metro to earn a profit of $1.27 per share on $2.66 billion in revenue, according to Thomson Reuters.

The results sent Metro's shares to an all-time high of $89.22 in intraday trading Wednesday. By late afternoon the stock was still up $6.04 or 7.32 per cent at $88.54 on the Toronto Stock Exchange.

During the fourth quarter of 2014, Metro completed the acquisition of the Premiere Moisson bakery business, which accounted for about half a percentage point of increased sales.

La Fleche said Metro grew its market share slightly as sales grew across all of its banners, which include Metro and discount chains Foods Basics and Super C.

"The competitive environment in the fourth quarter and into the new fiscal year can be described as intense but stable with promotional activity remaining at high levels," he told analysts, noting that traffic in its stores increased in part due to lower fuel prices.

He said the company's strategies, including improving its fresh food offering, are "gaining traction in our very competitive industry."

Metro plans to roll out Premiere Moisson in its conventional stores next year, especially in Quebec, before helping the bakery chain to expand the number of stand-alone locations. It also plans to add two new Mediterranean-style Adonis stores in Quebec in the next fiscal year.

"It's a good first step but they're still too high and I think the retailers will continue to lobby and speak to the government to lower the interchange fees even more," he added.

Irene Nattel of RBC Capital Markets said Metro is ending the year "with a bang" by delivering its strongest quarterly momentum since early fiscal 2013.

"The real story in the results is the step up in top line momentum," she wrote in a report, pointing to the gains from its merchandise strategies and the reorganization of Metro's Ontario store network.

The 2013 results included a $266.4-million after-tax gain from Metro's sale of part of its investment in Alimentation Couche-Tard Inc., after taxes, and a $29.4-million charge after taxes for the reorganization of its Ontario network.

On an adjusted basis, the company earned $460.9-million or $5.13 per share from continuing operations for its latest financial year, up from $460.7-million or $4.73 per share the previous year.

Meanwhile, former CEO Pierre Lessard's 24-year career with Metro will end in January with his retirement as board chairman as he reaches the mandatory retirement age of 72. He will be replaced by former National Bank CEO Real Raymond, who joined Metro's board in 2008. 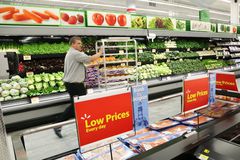 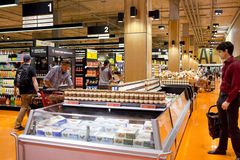