Starbucks Canada wants its customers to order a pinot grigio along with their caffe latte.

Starting on Tuesday, the coffee chain will launch an "evenings" menu of premium wines and craft beers in three of its Toronto cafés, with plans to expand further in Canada. It is betting the alcoholic beverages, along with new "shareable" food platters after 2 p.m., will entice patrons in the late afternoon and evening, boosting its business in an increasingly heated coffee market.

The upscale chain's prices will range from $13 for a glass of Santa Margherita Pinot Grigio to $5 for a Muskoka Mad Tom IPA beer, while coffees cost from $1.90 for a "tall" brew to $5.45 for a larger "venti" smoked-butterscotch latte.

The evenings initiative comes as Starbucks operates in a tight café landscape in which it battles big players, such as Tim Hortons and McDonald's, with its McCafé, to win customers with new products and mobile payments even as out-of-home coffee consumption remains sluggish.

"We're constantly looking for ways for customers to say: 'Isn't that cool that Starbucks did something new,' " said Rossann Williams, president of Starbucks Canada, as she sipped a "Reserve" Ethiopia Yirgacheffe Chelba "small-lot" coffee ($4.50 for the venti size) at a Bloor Street West location which will offer the beer and wine.

"That's how customers vote for what they appreciate – when people come back more often and they spend more money."

Restaurants are racing to expand into new areas to shore up their sales and bottom line, raising the spectre of the chains diluting their image and their core strength – in Starbucks's case, that of premium coffee.

"Is there a risk that a new crowd of people will be boozing in Starbucks?" asked John Quelch, a professor at Harvard Business School and marketing expert. "I don't think it's that big a risk.… This is more the wine-bar crowd than the sports-bar crowd that this is targeted at."

Prof. Quelch said Starbucks's introduction of alcoholic drinks raises a host of operational challenges including training baristas to police under-age drinkers and to take on other new duties tied to serving wine and beer.

Still, other fast-food players have rolled out alcoholic beverages, including Burger King and Taco Bell south of the border in select sites, and McDonald's and Taco Bell in some of their European restaurants. Starbucks already has begun offering wine and beer in more than 300 of its U.S. locations and one in each of Britain and Japan.

"We don't have anything to share with you on this topic at this time," Tim Hortons spokeswoman Sarah Robertson said. A McDonald's Canada spokesman said it has no plans for wine and beer.

"The industry is undergoing massive evolution at this time, and I believe that Starbucks is still a leader in the marketing and growth areas," Mr. Fisher said.

The math makes sense for Starbucks. The value of its customers' purchases average $4.74, compared with $23.07 spent by patrons at restaurants that serve alcoholic beverages, according to market researcher NPD Group.

Seattle-based parent Starbucks Corp. has predicted that its evenings program can generate $1-billion (U.S.) in additional sales by 2019.

The introduction of wine and beer at Starbucks Canada follows the chain's setback last year when it was forced to close its restaurants in Target Canada stores. The discount retailer filed for court protection from creditors and shut all its 133 outlets here.

"It was quite disappointing," Ms. Williams said. "But all that did was just refocus us on what's next."

She said Starbucks has had no problem with rowdiness in its U.S. cafés that serve alcoholic drinks. "We haven't seen that it's the type of environment where people are going to come in and have five or six or 10 glasses of wine."

She said Starbucks has invested "significantly" in training its baristas about responsible drinking rules, pouring drinks, recommending menu pairings and taking the drinks to customers' tables, which is a departure for the chain.

South of the border, café employees who are under-age have been shifted to earlier hours or transferred to a Starbucks without alcoholic beverages, she said.

Starbucks executives have said it envisions offering wine and beer in as many as 20 per cent of its U.S. stores.

It found that three full meals a day are a thing of the past and are being replaced by grazing or small snacks, a spokeswoman said. The information helped Starbucks develop its evening menu, including bacon-wrapped dates ($5.95), chicken sausage & mushroom flatbread ($7.95) and truffle mac & cheese ($6.95).

Prof. Quelch said the menu should appeal to millennials, who are drawn to sharing food, and to women, who would prefer sipping wine in the safety of a Starbucks rather than a sports bar. "The sharing economy comes to Starbucks," Prof. Quelch said.

Ms. Williams said the new menu provides an opportunity to extend coffee and tea sales as well to the evening. Cafes have been renovated to, among other things, add arm chairs and dimmers for lights.

As for the Target setback, it has helped Starbucks focus on other initiatives in Canada, including mobile ordering and payments, personalized drive-throughs with two-way video communications and now wine and beer. With 1,300 cafés in Canada today, Starbucks plans 100 more outlets annually in the next couple of years in this country, Ms. Williams said.

The café company said that in its first quarter, its Americas division, which includes Canada, posted a sales lift of 9 per cent at stores open a year or more and a 4-per-cent gain in traffic to its sites. 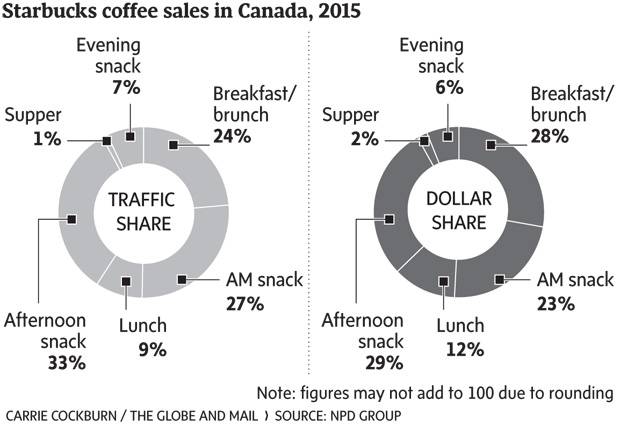 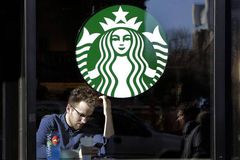